San Francisco, June 14, 2011 — Last night, June 13, Asia Foundation President David D. Arnold hosted a private dinner at The Four Seasons in San Francisco for His Excellency the President of Mongolia Tsakhiagiin Elbegdorj. The president was in the Bay Area to underscore strong ties with the U.S. and to commemorate the recent opening of a formal Mongolian consulate here. President Elbegdorj also toured the Silicon Valley to meet with leading businesses about cross-collaboration on energy and environmental technology. He called the Bay Area “the gateway to Asia.”

Asia Foundation President Mr. Arnold remarked, “President Elbegdorj was among the young leaders who would help guide Mongolia through its transition to democracy.” He added: “There is no question that Mongolia, under President Elbegdorj, has seen phenomenal economic growth with a strong focus on environmental protection and advancing anti-corruption measures.”

Mr. Arnold continued, “The Asia Foundation looks forward to continuing to partner with President Elbegdorj and his government to meet Mongolia’s critical challenges and advance its long-term development.”

Raised close to nature in Mongolia, President Elbegdorj actively advocates for the protection of the environment and put this in his presidential guidelines. He participated in the UN Climate Change Conference in 2009 and is a member of the World Economic Forum’s Global Agenda Council on Climate Change. Mongolians planted two million trees to alleviate desertification on May 14, 2011 Tree Planting Day, which was announced and decreed by President Elbegdorj.

Before being elected president in May 2009, and sworn in soon after, President Elbegdorj was the Prime Minister of Mongolia twice, the vice speaker of the parliament of Mongolia once, the majority leader of the parliament once, and a member of parliament four times. His Excellency is a former grantee of The Asia Foundation. His work in 1993 focused on the role of legislatures in the formulation and oversight of foreign policy in the U.S. 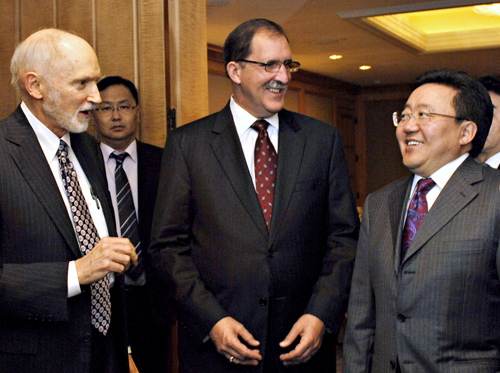 In 1991, The Asia Foundation was privileged to be the first international NGO to be invited to Mongolia. As Mongolia embarked on its historic double transition to democracy and market economy, the Foundation was able to provide early support in the development of the 1992 constitution. The president of The Asia Foundation at that time was Dr. William Fuller, pictured below with Mr. Arnold and with President Elbegdorj.

For nearly two decades, The Asia Foundation has been implem enting projects in Mongolia in such areas as advancing anti-corruption and legal reform; combating human trafficking; spearheading environmentally sustainable economic development; promoting higher education, particularly for girls; and providing access to educational resources through the Books for Asia program.