Next week, U.S. Secretary of State John Kerry will join leaders from the Lower Mekong Initiative (LMI) partner countries – Cambodia, Laos, Myanmar, Thailand, and Vietnam – for the sixth LMI Ministerial Meeting in Brunei, Darussalam. The meeting will be held on the margins of the ASEAN Regional Forum Ministerial Meeting, with the theme “Our People, Our Future Together,” stressing the importance for the people of ASEAN to work together for the development of the region. 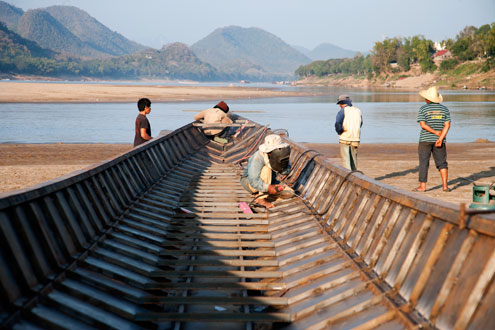 The Mekong River is the seventh largest in the world, covering an area of 1.9 million square kilometers. The region is rich in natural resources including fisheries, forests, biodiversity, and minerals. Photo/Bart Verweij

The LMI was created in 2009 by then Secretary of State Hillary Clinton and foreign ministers from the partner countries to enhance cooperation among the Lower Mekong countries in the areas of environment, health, education, and infrastructure development. Much is at stake: communities in the region are experiencing great changes from fast-paced economic growth averaging five to seven percent annually. While recent growth has reduced poverty and supported progress toward achieving the Millennium Development Goals, the rapid pursuit of GDP growth, urbanization, infrastructure development, raw materials, and energy sources also jeopardizes the region’s natural resource base, food security, and livelihoods. Coordinated efforts will be necessary to ensure that equitable and sustainable development benefits all 60 million people in the region.

The Lower Mekong region is bound by the Mekong River, whose source originates in China and empties into the South China Sea in Vietnam. The river is the seventh largest in the world, covering an area of 1.9 million square kilometers. The region is rich in natural resources including fisheries, forests, biodiversity, and minerals. Throughout my career in international development, I’ve had the opportunity to observe the river at different locations and times, always impressed by its vital role as a source of livelihood that communities and ecosystems depend on deeply. But recent fast-paced developments, un-balanced by the voices and perspectives of the very people whose lives depend on it, are threatening this system.

Encounters with the Mekong

My first glimpse of the Mekong River was when I was traveling in 2007 in Yunnan Province, China, where the river there is known as the Lancang River. I was distinctly aware of its direct source: cold melt water from the Himalayan Glaciers of the Tibetan Plateau, a few thousand miles to the north, having recently traveled there. Climate change, however, is projected to decrease China’s glacial coverage by 27 percent by 2050, which would significantly diminish water availability for communities throughout the Mekong region.

My next encounter with the Mekong River was in Phnom Penh, Cambodia, in 2010, where the river flows through the capital city, and during the rainy season, reverses course to flow into Tonle Sap Lake, via a tributary of the same name, a unique phenomenon that is critical for supporting the rich ecosystem, including rare plant, bird, and fish species. Roughly 75 percent of people in the region rely on agriculture and fisheries for their livelihoods, and freshwater fish from the Mekong River and its tributaries, including Tonle Sap, which is Southeast Asia’s largest freshwater lake, provide 47 to 80 percent of their animal protein.

Development in the Region

However, regional development projects threaten the food security for these dependent communities who make up the majority of the region’s population. Over the past several years, a shift in the financing of development projects in the region has been occurring, from traditional development assistance from multilateral development banks such as the World Bank and the Asian Development Bank (ADB), to more regionally-based sources, including the private sector, banks, and national governments. These regional investments, which include projects like dams, pipelines, and railroads, in many cases do not have concrete safeguards against negative social and environmental impacts. They also have significant implications for neighboring countries, which requires broader ecosystem, participatory, and basin-wide approaches to development. 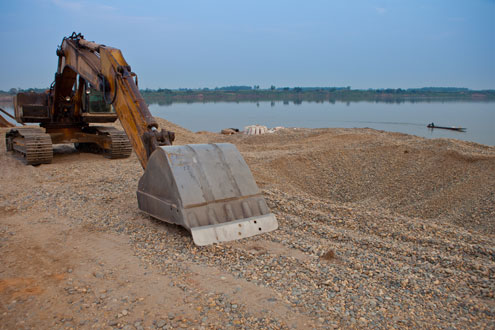 While recent growth has reduced poverty in the Lower Mekong Region, the rapid pursuit of GDP growth also jeopardizes the region’s natural resource base, food security, and livelihoods. Photo/Marco Ryan

My third glimpse of the Mekong River was in the Lao capital of Vientiane in 2011, also the home of the Mekong River Commission (MRC), the regional body consisting of four Lower Mekong country members (Laos, Cambodia, Thailand, and Vietnam) to coordinate information on development projects that have regional implications, including dam construction. Chinese, Thai, Vietnamese, and Malaysian companies are currently financing 11 dams planned for construction along the mainstream Mekong – nine in Laos and two in Cambodia. The Social and Environmental Assessment (SEA) conducted on these dams for the MRC concluded that their cumulative impact would significantly alter downstream flows and water levels, block fish migration, decimate economically crucial and endangered species, trap silt needed to sustain rice production, and impact the livelihoods of millions of people in the region. The Xayaburi Dam in particular, which is planned for construction in Laos on the mainstream Mekong, has been controversial for its potential impacts to ecosystem dynamics and local livelihoods. However, the dam is set for development, despite opposition and concerns by the Cambodian and Vietnamese governments, civil society, and environmental groups.

Meaningful public engagement and participation on these regional development projects is limited, and access to information by the communities varies, as do the direct impacts that the projects have across the region. In Cambodia, civil society can access some environmental information, but often lack the technical capacity to provide meaningful input. While organizations monitor and advocate upwards, there is little time spent on disseminating information widely and educating the general public. In Laos, non-profit associations were granted defined legal status quite recently, in 2009, and their capacity is still limited. Similarly in Myanmar, recent reform measures created opportunities for increased civil society engagement, but basic capacity-building is needed. While Thailand’s 2007 Constitution requires public participation on natural resource protection, the public is often unaware of important environmental information, and elevating issues to the national level is a challenge. In Vietnam, there are existing laws and regulations aimed at protecting the environment, but their implementation and enforcement is problematic. Interaction between civil society and the government is growing but still very limited, and much remains to be done to broaden the space for public participation that can lead to more sustainable and equitable outcomes.

Civil society in the region is beginning to coordinate through networks and coalition groups on issues of mutual interest in response to the regional impacts of large-scale projects. To date, however, civil society initiatives have not been able to significantly influence regional development project decisions. Their efforts currently have little chance of success when they challenge governments and powerful economic and financial stakeholders with vested interests in seeing projects implemented as quickly as possible.

At the same time, regional bodies, such as the ADB, MRC, ASEAN, and the LMI, coordinate efforts on shared regional interests including economic integration, development in the Mekong River Basin, trade, environment, health, education, and infrastructure, and have made concerted attempts to engage the public on development projects. But in practice these bodies have not yet been effective in engaging local communities, and regional multi-stakeholder engagement has yet to ensure non-state actors can influence regional development decisions. Let’s hope leaders at Monday’s ministerial meeting bring citizens’ voices and concerns to the table.

Lisa Hook is a senior program officer for The Asia Foundation’s Environment Programs in San Francisco. She can be reached at lhook@asiafound.org. The views and opinions expressed here are those of the individual author and not those of The Asia Foundation.