When Indonesians head to the polls six months from now, they will have a record number of women candidates to choose from. Hard-won reforms by activists pushing for increased requirements for women’s representation have resulted in a new high for women candidates, who comprise 38 percent of the 6,608 registered contenders. The General Election Commission (KPU) now strictly enforces a 30 percent quota for women’s representation in political party structures and candidate lists, and has even disqualified parties for failing to meet the requirement. 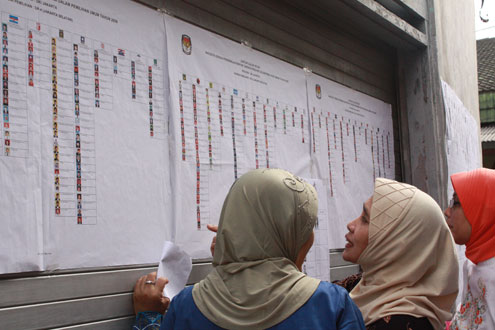 When Indonesians head to the polls six months from now, they will have a record number of women candidates to choose from, with 2,282 women competing for seats in the national legislature. Photo/Natalia Warat

The 2014 general elections will see 2,282 women compete for seats in the national legislature. A recent assessment of legislative candidates conducted by The Asia Foundation’s local partner, the Association for Elections and Democracy (Perludem), found that 56.4 percent of women candidates for the national parliament are from the private sector. Three-quarters (75.8 percent) hold a university degree (bachelor or post-graduate) and most (62 percent) are between the ages of 31 and 50.

Earlier this year, the KPU disqualified 77 candidates from five parties in seven electoral districts because they did not attain the 30 percent threshold. The KPU’s strong stance managed to see the 30 percent quota upheld in nearly all electoral districts, including Aceh, where parties had previously failed to comply with the regulation, leading to very low levels of women’s representation.

But before we rejoice about the implications this could have for improving women’s status, it is worth reviewing the recent history of women’s representation in Indonesia.

The 2009 general elections saw Indonesia achieve its highest-ever level of women’s representation in the National Parliament (DPR). Some 101, or 18 percent, of the 560 parliamentary seats were secured by women. In provincial and district level parliaments, women’s representation reached 16 percent and 12 percent, respectively, also record highs for regional government. These impressive numbers can largely be attributed to tireless advocacy efforts by civil society that began immediately following the fall of President Suharto and leading up to Indonesia’s first democratic election in 1999. Despite a relatively free and fair electoral process, the 1999 election only saw 45 women (9 percent) elected to the 500-member strong national parliament. Leading up to the 2004 elections, women activists successfully pushed for affirmative action to redress this balance, and a requirement was introduced for one in three candidates to be a woman, and alternated on the ballot paper in a “zipper” fashion.

Although the results achieved in 2009 were impressive, examining the profiles of these women representatives tells a more complex story. A study by the Center for Political Studies at the University of Indonesia (Puskapol UI) found that 41.7 percent of women elected in 2009 were heiresses of political dynasties. To meet the increasingly stringent requirements for women’s representation, political party elites have tended to place female family members on the candidate list instead of recruiting or nominating more women through the party structure. They have also resorted to parachuting in female celebrities. This pattern is encouraged by Indonesia’s political party system, which requires potential candidates to contribute substantial funds to the party should they wish to run for office. The pool of women with the financial resources to support expensive campaigns – and pay for adequate domestic support while they are occupied with politics – is limited. This means that women candidates tend to be elites, too, and rarely have pro-poor or gender inclusive perspectives.

Indeed, civil society’s expectation that increased women’s representation would result in gender-responsive policies have been premature. Although more women are serving as elected officials, the National Commission of Violence Against Women (Komnas Perempuan) has recorded a steady increase in the number of regulations that discriminate against the rights of women and minorities over the past five years. This year, Komnas Perempuan recorded 342 discriminatory regulations, more than double the figure recorded in 2009.

For example, in West Java, women’s representation jumped from 9 percent in 2004 elections to 25 percent in 2009. Yet the province still suffers from significant gender inequality, with higher than average rates of trafficking and maternal mortality. According to Komnas Perempuan, local parliaments in West Java issued 35 discriminatory regulations in 2012, more than most other provinces studied.

The number of high profile women embroiled in corruption cases recently has certainly not helped the situation. The governor of Banten, Ratu Atut Chosiyah, and the political dynasty her family has created in the province, looks in serious trouble following the arrest of her younger brother for alleged bribery this month. This followed the conviction of Angelina Sondakh, a Democratic Party lawmaker and former Miss Indonesia, early this year for her role in two corruption cases. These incidents – and many others – have confirmed to the public that women are just as likely to participate in the transactional politics previously dominated by male legislators. A 2011 Asia Foundation survey revealed that respondents perceived women legislators as just as corrupt as male representatives.

While the signs look good for an increased percentage of women representatives in parliament post-2014, the past five years have taught us that strengthening gender equality requires much more than increased representation. Political parties and other political institutions need to be supported to improve their understanding of gender and women’s empowerment. Women representatives also have a great need for ongoing technical assistance and capacity building so that they are able to perform as legislators. These are systemic problems, and will require a broader focus beyond women-specific issues and recruiting male representatives into the cause.