A new report from the Asian Development Bank sent a warning signal to Mongolia that, despite its wealth of natural resources and pristine image, the country faces a severe water scarcity and quality crisis – one that could leave its growing capital, Ulaanbaatar, faced with water shortage as early as 2015. 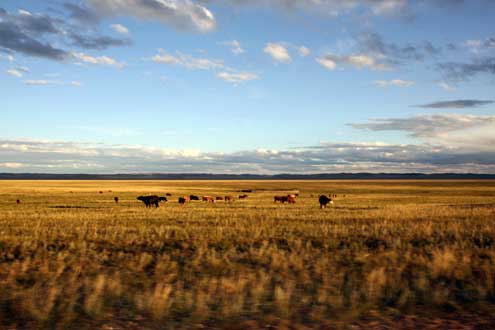 Despite its wealth of natural resources and pristine image, Mongolia faces a severe water scarcity and quality crisis. Photo/Jon Jamieson

Outside of the capital, Mongolia’s rural residents are also under threat. As a result of climate change, hundreds of Mongolia’s lakes and rivers have dried up, and there is significant desertification of land especially in the south around the Gobi desert. Water sources are unevenly distributed within the landlocked nation, with abundant surface water resources located in northern Mongolia, but which are inaccessible for the drier central and southern parts of the country that lack water sources. As a result, Mongolia has a high reliance on groundwater resources which accounted for 80 percent of all freshwater consumed in 2010, according to the recent ADB report. Water is crucial not only for daily consumption by the people and for herders to maintain their livestock, but also for Mongolia’s economic development as an essential resource for industries such as the mining sector, which has driven the country’s economic growth. Reconciling these competing interests is a challenge, and conflicts over water can put increasing pressure on the already limited resources.

Apart from water scarcity, water quality is also a worrying concern with herding, mining, and urban development posing threats to public health. In the northern province of Mongolia, Khuvsgul, home to one of the largest fresh water lakes in Asia as well as a wide network of rivers, many communities live in remote areas that lack basic water supply infrastructure. A survey conducted by The Asia Foundation in 2013 under its Environmental Protection and HWTS pilot project implemented in 12 soums of Khuvsgul aimag, showed that residents in the soums almost exclusively collect drinking water from sources outside the home and that half came from unprotected lakes and rivers. The survey also found that most unprotected sources are exposed to significant levels of contamination from proximal human waste, livestock, and seasonal flooding. The survey also found that nearly two-thirds of all households do not treat their drinking water. The majority of households collect drinking water in closed plastic or metal containers, but store water in open or partially open containers. While about two-thirds of households clean their drinking water collection and storage containers at least once per week, it is likely that many household containers are sources of contamination as a result of inadequate cleaning and disinfection.

In the remote soum of Tsagaan-Uur in Khusvsgul, the majority of households obtain water from the river to fulfill their daily living needs. However, the quality of water is increasingly threatened by pollutants from animal husbandry and waste disposal. To monitor the quality of the water in the area, the Foundation recently established a water quality monitoring group consisting of citizens, teachers, water guardians, local health inspectors, and other officials to protect the local river and test water quality on a frequent basis. In addition, to raise awareness among households, parents, teachers, children, and local government officials, we organized a training on household water treatment systems to improve their water, sanitation, and hygiene behavior.

According to Enkhtsetseg Bazarsad, a member of a herder family and one of the participants in the training for households, deteriorating water quality is especially an issue in the summer when the rivers are not frozen and therefore more exposed to external pollutants. “During the winter months, we live higher up in the mountains and collect water by piercing a hole in the ice or crushing the ice itself, and water tends to be purer. In the summer months, we collect water every day from the river in jerry cans as we live outside the soum center without any access to a water well,” she said. As a result of the HWTS training, she now filters water through a cotton cloth or by boiling it before usage. Further awareness raising is needed within the broader community to sensitize people on the health hazards of drinking unsafe water, and for this purpose, the Foundation together with the National Public Health Center is developing a strategy to change behavior which will be implemented this fall.

Water quantity and quality is also becoming a problem increasingly in the capital Ulaanbaatar. With nearly 50 percent of the population living in Ulaanbaatar, ensuring that there is sufficient and safe water for everyone is a challenge. As a result of climate change and increased water substraction, the streamflow of the Tuul river, which feeds the acquifer that supplies most of the water for Ulaanbaatar, is shrinking. Especially in the outer districts, many residents lack a connection to the central water supply network and have to make use of water kiosks to purchase water or get their water directly from the river. In the outer area of Nailakh district, this is especially a problem as in the absence of proper water sewage systems, sewage gets disposed of in the river affecting households living downstream. To empower the local communities to be better able to protect their existing water sources, treat, and safely store water to ensure it is safe for consumption, the Foundation is expanding its pilot project to Ulaanbaatar’s Nailakh district. It is expected that the pilot project in Khusvgul and Nailakh will provide valuable lessons learned to inform national level policy decision-making on the protection and treatment of Mongolia’s precious water sources.

The Asia Foundation’s Environmental Protection and Household Water Treatment Systems pilot project in Khuvsgul and Nailakh is funded by UNICEF.