Last month, China passed its first-ever national law against domestic violence, the result of a decade-long campaign driven by the country’s civil society groups. The new law, which goes into effect on March 1, takes a significant step forward from existing legislation by legally defining domestic violence as physical and psychological abuse of family members and cohabitating non-family members. There are still gaps – it does not cover divorced couples or former partners, nor does it address sexual abuse or economic control. But the law is groundbreaking for addressing what has long been deemed a private matter in China. 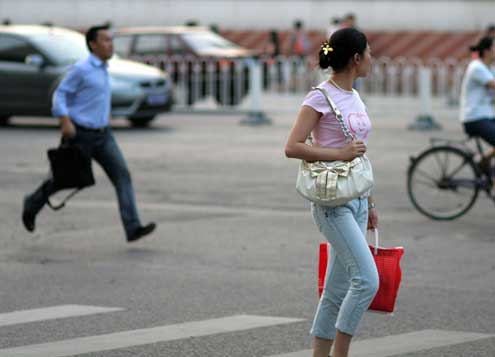 Last month, China passed its first-ever national law against domestic violence, the result of a decade-long campaign driven by the country’s civil society groups. Physical abuse was not even accepted as grounds for divorce until 2001 in China, when the marriage law was amended to explicitly ban domestic violence for the first time. Photo/Flickr user Ernie

Physical abuse was not even accepted as grounds for divorce until 2001, when the marriage law was amended to explicitly ban domestic violence for the first time. However, the amended marriage law did not provide any legal definition of the term; thus many victims – if they did report abuse – were shuffled from police to women’s federations to community administrations, with authorities reluctant to intervene unless serious injury was involved. In addition, many groups affected by domestic violence – including unmarried cohabitating couples – were not covered by the marriage law.

According to the All-China Women’s Federation, about a quarter of all married women in China have suffered violence in their marriages, though only 40,000 to 50,000 complaints are registered by women’s federations each year. Almost 90 percent of reported cases involve abuse of women by their husbands, though men are not immune to domestic abuse. The data released by the federation also showed that more than 43 percent of children between 10-17 years old were abused by their parents, while 14 percent of seniors aged 65 or above had been abused in the home within 12 months prior to the survey. Other research showed that domestic abuse exists in about 43 percent of intimate relationships among the LGBT community.

Women’s federations and civil society groups have led the push for a national law by laying the groundwork at the local level. As early as 2003, the former Anti-Domestic Violence Network of China raised the first proposal for a law against domestic violence to China’s national legislature. Since then, various civil society groups teamed up with women’s federations to carry on the advocacy, with evidence produced through a wide range of research and pilot interventions. Over the course of these efforts, 29 out of the 31 Chinese provinces (and special administrative regions) had already passed local regulations against domestic violence.

The term “family violence” – which is the Chinese translation for abuse in the home and reflects the narrow perception of domestic violence – first became widely known in China thanks to the 2002 drama series, “Don’t Talk with Strangers,” about how abuses in the home of a newlywed couple were gradually uncovered by various strangers, family members, and friends. The public became more aware as other cases such as Kim Lee, an American who revealed abuses by her Chinese celebrity husband on social media, came under the spotlight. Because of this increase in public awareness, more than 40,000 comments were collected when the draft law was released for public comment last fall. Based on the public feedback, the definition of domestic violence in the draft law was revised to include psychological abuse and cohabitating non-family members.

Acknowledging prevention as the fundamental cure, the law clarifies the responsibilities of various stakeholders – including but not limited to government agencies, mass organizations, schools, medical institutions, social worker services, and the media – to carry out public education. For the first time, employers are required to play a role in preventive intervention. But shortcomings are apparent. Most provisions regarding prevention lack definition of minimum standards and accountability. While unequal power relations between genders are widely acknowledged as the root cause of domestic violence, the law fails to include gender equality as a subject of public education.

Under the new law, one of the biggest protective mechanisms is the restraining order. In 2008, China’s Supreme Court began to pilot-test the use of restraining orders in lawsuits involving domestic violence at a number of local courts. Data from the pilot courts showed that over 90 percent of the restraining orders were effective in stopping abuse. But during that period, many victims were not eligible for restraining orders, either because of difficulty in providing evidence of abuse or the absence of lawsuits as a prerequisite.

The new law will help remove many of those barriers. Police and medical institutions will now be required to produce and maintain evidence of suspected abuse. Procedures for getting and maintaining restraining orders will no longer require that a lawsuit be filed. Penalties for non-compliance by the abuser are also defined: If the abuser violates the restraining order, they may be fined up to 1,000 CNY (about $152), detained for up to 15 days, or face criminal charges.

The changes will make a big difference for domestic violence victims like Z*, a middle-aged mother from Nanjing. Four months ago, she fled home after nearly being killed by her husband, who had tried to push her off the roof of their home late one night. Her 20-year-old son, who had fled with her, was stabbed in the stomach by his furious father, who had found them at their temporary home. Z then sought help through an Asia Foundation-supported survivor assistance program last fall, before the new law had been enacted. Her social worker called an emergency meeting with the Women’s Federation officer, a pro bono lawyer, and a psychological therapist. While a restraining order was considered the best option to address her safety concerns, the lawyer said it wasn’t feasible because restraining orders were difficult to obtain and would expire within 15 days unless Z filed for divorce – something she had not yet decided to do. Under the new law, Z will be able to obtain a restraining order for up to six months, regardless of a decision to divorce or not.

The new law also highlights other changes in intervention procedures. Before the law came out, authorities usually intervened only after victims reported and/or filed a case by themselves. That requirement made it difficult for many victims to get help or justice. For instance, those subject to physical threats by the abusers may not be able to report and file a case. The new law allows close family relatives of the victim to report and/or file a case. In addition, authorities are required to directly intervene in suspected abuse cases involving those with no or limited capacity, namely minors, seniors, persons with disabilities or critical illnesses, and pregnant or lactating women. For example, social workers, schools, medical practitioners, welfare officers, and community workers are required to perform mandatory reporting. Police, women’s federations, community administrations, civil affairs departments, and shelters can also request the courts to grant restraining orders and/or change guardianship.

The biggest challenge now is how to effectively implement the law. Many practitioners still lack the knowledge and skills necessary to intervene in cases. Incorporating gender sensitivity and protocols of intervention in domestic abuse into the professional training of practitioners – including social workers, doctors, teachers, police, and others involved in law enforcement – will require significant investments of time, funding, and human resources. While the new law marks a pivotal turning point in addressing domestic violence in China, there is a long journey ahead.

*The victim’s full name has been omitted for privacy reasons.

Chen Tingting is The Asia Foundation’s program officer for women’s empowerment in China. She can be reached at tingting.chen@asiafoundation.org. The views and opinions expressed here are those of the author and not those of The Asia Foundation or its funders.