On May 9, a record-breaking 81.6 percent of Filipino voters went to the polls to elect a new president. Davao City Mayor Rodrigo Duterte, who ran a tough-talking, polarizing campaign that focused on criminality and promised to instill law and order, won with over 38 percent of the votes. 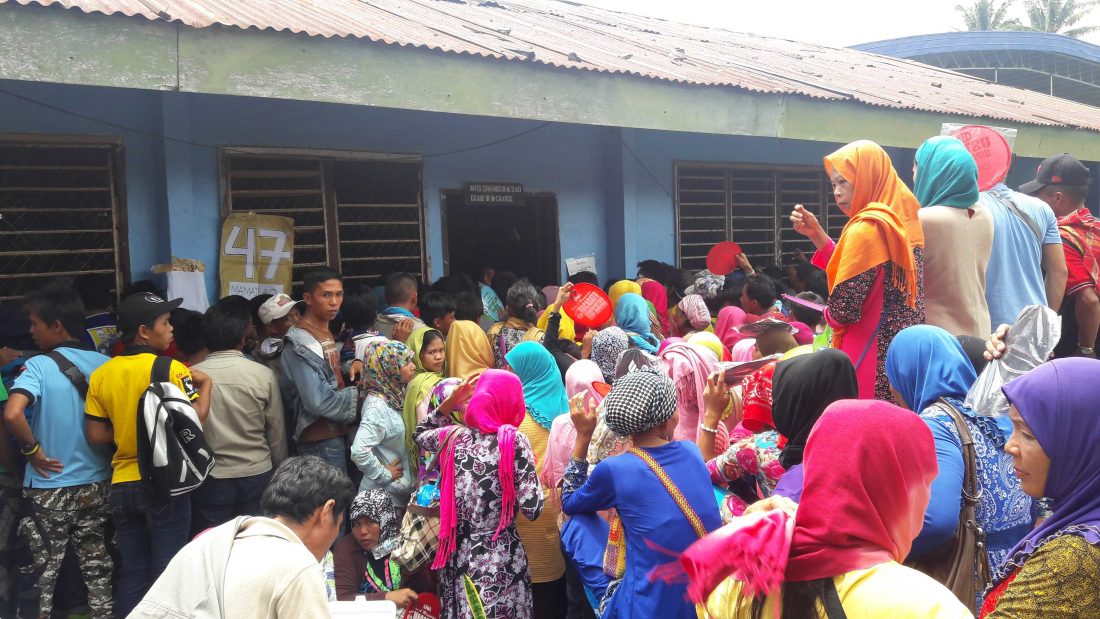 On May 9, a record-breaking 81.6 percent of Filipino voters went to the polls to elect a new president. Voters line up in Butig Lanao del Sur. Photo by Derkie Alfonso

Aside from issues of criminality, the Philippines also experiences a number of long-running conflicts involving armed groups including Muslim separatists, communists, clan militias, and private armies of politicians. As mayor of Davao, Duterte has a long history of dealing harshly with criminals and banning private armies, but at the same time, having cordial relations with insurgent groups, both Muslim and communist, that have a presence in the hinterlands of his sprawling city. During the campaign, one of the themes was his willingness to reach out.

Duterte and his team have also been in a very public conversation with the leadership of the communist insurgency, even going so far as to announce plans to give some cabinet posts to the Communist Party of the Philippines (CPP). The CPP is considered to be one of the oldest communist insurgencies in the world and its declared aim is to overthrow the Philippine government using guerrilla-style warfare. 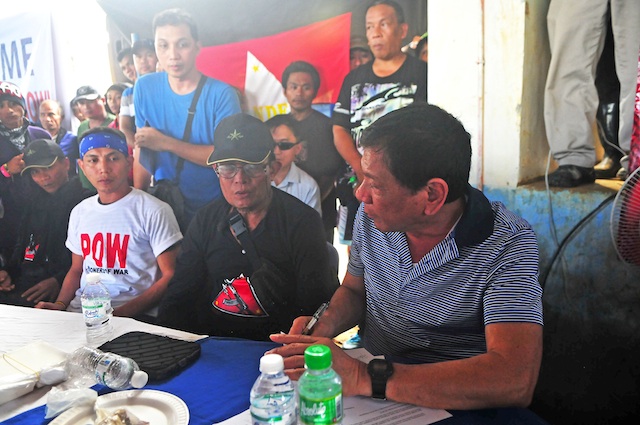 During the campaign period, Davao multimedia cooperative Kilab released video of Duterte chatting online with Communist Party of the Philippines (CPP) founding chair (and National Democratic Front of the Philippines’ “chief political consultant”) Jose Maria “Joma” Sison. Shortly before the elections, the New People’s Army (NPA), the armed wing of the CPP, handed over batches of “Prisoners of War” (police and soldiers captured in encounters) to Duterte. Since the election, Joma has said that he expects Duterte to visit him in Utrecht, Netherlands (where he has been in self-exile for almost 30 years), although this seems unlikely now that the first presidential visits are expected to be to ASEAN countries. Much attention has been given to the fact that Duterte was Joma’s student for a college course in Manila in the late 1960s before Martial Law, and Joma has expressed his hope to visit the Philippines. Meanwhile, anti-American leftists in the Philippines connect with Duterte’s suspicion of U.S. motives and actions, most spectacularly around a 2002 suspicious explosion in Davao city that was followed by an American being spirited out of the country over Mayor Duterte’s objections.

Rhetoric notwithstanding, is it possible that Duterte’s personal connections and public pronouncements could accelerate peace negotiations with the NDFP, bringing to a close decades of communist-inspired internal warfare?

The task will be difficult, as demonstrated by many years of failed attempts at negotiation. The initial rounds of negotiations with the National Democratic Front of the Philippines (NDFP) under President Noynoy Aquino in 2010 and 2011 seemed to be making progress. However, talks then and subsequently foundered on the issue of release of detainees, said to be NDFP “consultants,” who are covered by the 1995 Joint Agreement on Security and Immunity Guarantees (JASIG). When both negotiating panels flew to the Netherlands to open the sealed envelope that was supposed to contain the real names and photos of NDFP consultants, they found diskettes that the rebel group claimed to contain the relevant data. The diskettes, however, could not be decrypted leading to the decision not to release the detainees. The information was not forthcoming and the peace talks have repeatedly stalled since.

Nevertheless, Duterte and his team have indicated a willingness to release the detained NDFP consultants. However, the Philippine security forces have up until now been trumpeting their success in capturing the NPA leadership. The release of high-value individuals such as Wilma and Benito Tiamzon (the leaders of the underground movement in the Philippines who were on the military’s most wanted list since 2012 and were arrested in Cebu in 2014) may be opposed by the security establishment, particularly as the government believes that many of those previously released returned to the armed struggle. Luis Jalandoni, chief negotiator of the NDFP in the peace talks, has declared the Tiamzons as NDFP consultants and are therefore covered by JASIG. Jalandoni also said that the Tiamzons have acknowledgment letters as consultants from Silvestro Bello III, who had previously been chief government negotiator for these talks, and who Duterte will once again tap.

Substantive issues in negotiations with the NDFP are also likely to be difficult. No sooner had the Duterte transition team outlined their 8-point economic agenda than analysts denounced it as a continuation of “neoliberal strategies.” The leftist political party Bayan, which had allied with rival presidential candidate Grace Poe, declared Duterte’s economic agenda “a continuation of the neoliberal poison imposed on the people by the Aquino regime” – at which point a Duterte spokesman shot back that “the left continues to make the same mistakes and doesn’t learn.”

There are additional ideological issues that would arise in any negotiation or cooperation between the government and the NDFP. Duterte recently offered four cabinet positions to the communists: Environment, Agrarian Reform, Labor, and Social Work (DENR, DAR, DOLE, and DSWD). While the presumptive president agrees with the NDFP that the current agrarian reform program should be abolished they disagree on other issues. For instance, the Department of Social Welfare and Development (DSWD) administers the government’s conditional cash transfer, which the World Bank has rated one of the best in the world, but the NDFP has demanded its termination on the grounds that it merely encourages mendicancy.

While Duterte has the political will, relevant background, personal connections, first-hand experience, and people on his team with experience in negotiating with the NDFP, many obstacles remain to peace negotiations. As the Communist Party of the Philippines said in its May 15 statement: “There will be no honeymoon with the Duterte regime” and “the people’s war is set to press forward under the Duterte regime.” While progress can be monitored, early movement is likely to be slow, and political contestation will continue.

Anna Tasnim Basman is an assistant program officer for The Asia Foundation in the Philippines, and Steven Rood is country representative there. Basman can be reached at annatasnim.basman@asiafoundation.org and Rood at steven.rood@asiafoundation.org and @StevenRoodPH on Twitter. The views and opinions expressed here are those of the authors and not those of The Asia Foundation or its funders.