Three violent incidents monitoring systems (VIMSs) in Indonesia, the Philippines, and Thailand, produce highly granular information on multiple forms of violence in the areas they study.

This paper draws on data from the three systems and does the following:

First, it updates and fleshes out our understanding of violence in three Southeast Asian countries. The paper provides new, more comprehensive, evidence on the incidence and impacts of violence in Thailand, the Philippines, and Indonesia, each of which has experienced subnational conflicts along with other types of subnational violence. Drawing on the three systems’ data, the paper provides evidence on: where such violence is occurring; the forms and types it is taking; the impacts it has; and how it has evolved over time.

Second, the paper demonstrates the utility of VIMSs. It contrasts incident and fatality figures with those from other datasets, showing the extent to which the latter seriously under-report violence and its impacts. It also shows how datasets that record a wide range of kinds of violence allow for a deeper understanding of how violence manifests and changes over time. It demonstrates how collecting information on a wide range of variables for each incident can generate evidence that allows for more effective policy responses. And it shows how data from different VIMSs can be compared to provide deeper insights.

Third, the paper provides preliminary evidence on the drivers of violence in regions within the three countries, drawing on new analytic work. Working with highly disaggregated data in a country allows for much cleaner and more comprehensive assessments of the factors that may lead to violence than is possible with cross-national datasets. The paper thus highlights how developing single-country violent incidents monitoring systems, which generate comparable data, can push forward the frontier of conflict and violence research in Southeast Asia, and beyond.

This paper was produced as part of the Cross Regional Violence Monitoring Knowledge Exchange (CRVME) project, which aimed to foster knowledge exchange among violence monitoring systems in Asia, and disseminate lessons learned in the region and beyond. The CRVME was implemented by The Asia Foundation, and funded by the Korea Trust Fund for Economic and Peacebuilding Transitions, with co-support from Canada’s International Development Research Center. The UK Department for International Development provided additional support through the Programme Partnership Arrangement. 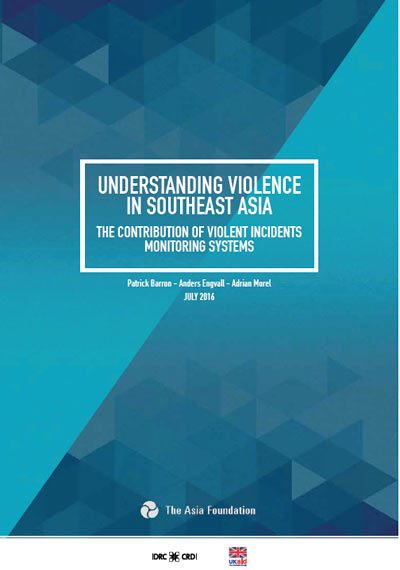