When the lights went off one night late last month at Beijing’s “Bird’s Nest” Olympic stadium (officially known as the National Stadium) and the Water Cube, it did not signal the end of the country’s glory surrounding all things Olympic. Rather, it signaled a commitment to protect the environment and combat new climate change. This was the first time ever that China participated in the March 28 Earth Hour activities that included switching off lights at landmark structures throughout the city. Besides Beijing, 18 other Chinese cities – including Shanghai, Shenzhen, and Wuhan – joined the effort. Turning the lights out reflects Chinese businesses’ and ordinary citizens’ increasing awareness of environmental issues.

Last month, at the 2009 National People’s Congress, Premier Wen Jiabao announced China’s progress in promoting energy efficiency and emissions reduction. Compared to 2007, energy consumption per unit of GDP fell by 4.59 percent in 2008, while sulfur dioxide (SO2) emissions and chemical oxygen demand (COD) fell by 5.95 percent and 4.42 percent, respectively. These figures show lower energy consumption and lower emissions than the previous two years when China started to implement the 11th Five-Year Plan, which set targets to reduce energy consumption per unit of GDP by 20 percent by 2010, and reduce SO2 emissions and COD levels by 10% by 2010, compared to 2005.

While these examples point to progress in China’s environmental management and sustainable development efforts at both the grassroots and highest government levels, some wonder if these achievements are instead just side effects of the financial crisis and accompanying slowdown in economic activity. The global financial crisis has resulted in the closure of many factories, especially export-oriented ones, and therefore emissions from these have indeed been reduced. Since the economic recovery is likely to take some time, near-term environmental pollution is likely to be reduced during this period of lower production. However, the economic crisis could shift priorities from environmental protection to stimulating the economy. This worries some because it could mean the prospects for future energy conservation and energy protection are not promising.

Adding to these concerns, at the National People’s Congress session in March, the central government also announced that investment in sustainable development was cut by 40 percent in China’s 4 trillion RMB yuan (about $586 billion dollars) economic stimulus plan. Compared to the original plan, which came out in November 2008, investment in sustainable development was scaled down from 350 billion RMB yuan, or 8.7 percent of the overall plan, to 210 billion RMB yuan, representing just 5.2 percent of the plan. Projects that fall under sustainable development include: wastewater treatment facilities, solid waste disposal facilities, pollution prevention and treatment in key rivers, reforestation, and energy efficiency engineering. Environmentalists hope that other areas of the stimulus plan, such as public infrastructure and technology advancement, might reflect environmental protection needs, but as of last month, 104 billion RMB yuan worth of projects under the stimulus plan failed to pass environmental impact assessments and were put on hold. This includes projects that were too energy intensive, might threaten drinking water sources, or damage nature reserves. (Projects totaling 970 billion RMB yuan did pass environmental impact assessments.). 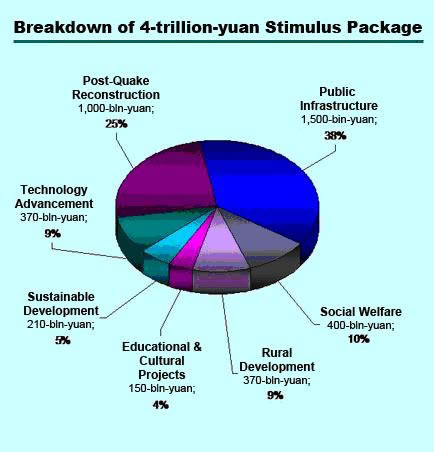 In spite of this, there are still some promising signs of the longer term prospects for China to achieve environmental sustainability.

Beijing citizens’ enthusiastic participation in Earth Hour reflects a growing public interest in the environment. There are more forums and workshops discussing “clean-tech,” and many top executives from China’s leading companies have committed to attend the 2nd “China’s Green Companies Annual Meeting” in Beijing from April 22-23. Together with Beijing-based Global Environmental Institute, The Asia Foundation’s China program recently launched an environmental entrepreneurship training project. It is exciting to see emerging entrepreneurs so enthusiastic about finding business solutions to the environmental problems and including environmental protection in their business plans.

Mr. Zhao Lijian is The Asia Foundation’s Environment Program Manager in Beijing where he develops and manages projects including a Pearl River Delta initiative focusing on cleaner production in the industrial sector, clean water, and environmental entrepreneurship training. He is a LEAD (Leadership for Environment and Development) Fellow and holds a MSc. degree in Environmental Sciences, Policy, and Management from the International Institute for Industrial Environmental Economics (IIIEE), Lund University in Sweden. He can be reached at [email protected].