Most physical reminders of the violent clashes that took place in the center of Bangkok last month have been swept away. Protest graffiti has been scrubbed off the walls and shattered windows have been replaced with sparkling new glass. Aside from the charred skeletons of burned buildings, all other visual reminders of the thousands of “red-shirt” anti-government protestors who camped out in the center of Bangkok for almost two months are gone. 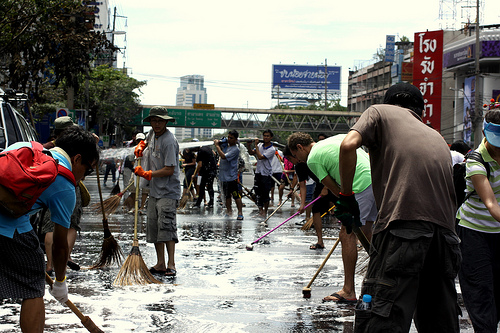 People clean up the streets after violent clashes took place in the center of Bangkok last month. Photo by Flickr user Candice and Jarrett, used under a Creative Commons license.

Shops and hotels in the area have re-opened and traffic once again clogs the roads that served as a temporary camp site for the red shirts. The soldiers who were ever-present around the camp perimeter have also vanished. In short, life in Thailand has begun to look normal again.

But beneath the surface appearance of calm a very different kind of struggle is emerging – it is a struggle that one Thai commentator speaking at the Foreign Correspondent’s Club of Thailand recently described as a “battle for the truth.” It is a battle that is raging both in the highest levels of government and in ordinary households around the country. As Bangkok Governor Sukhumbhand Paribatra pointed out during a public talk recently, this national conflict has gouged painful rifts in Thai society, dividing officials, communities, colleagues, and even families. At a separate lecture, Professor Thitinan Pongsudhirak, director of the Institute of Security and International Studies at Chulalongkorn University, echoed the governor’s words when he said that Thailand is a deeply divided society. He also highlighted a commonly-held concern that the middle ground between the two opposing sides may be shrinking.

In Thailand’s House of Representatives, a two-day censure debate that began at the end of May sparked fiery arguments among government ministers as opposition MPs grilled the prime minister on the recent violent clashes and loss of life caused by the government crackdown on the protestors. (Since the first major clash occurred between the military and protestors on April 10 this year, 89 people have been killed and some 1,800 wounded.) While the government won the resulting no-confidence vote in parliament, questions remain as to the details of what actually happened during the chaotic final week of the crackdown and, perhaps more importantly, what Thais think about it. With various versions of the truth competing for supremacy, the facts are something it seems no one can agree on.

On a bigger picture level, there are critical questions that have yet to be answered:

Without satisfactory answers, misconceptions and misunderstandings will persist, and the battle for the truth will continue. And, with so few neutral sources of reliable and trustworthy information in this divisive climate, there seems to be nowhere to turn for concrete answers.

At The Asia Foundation’s office in Thailand, we are updating our nationwide survey with the hope of shedding much-needed light on Thai perceptions of recent events and the county’s political development. The idea is to create a concrete resource that can be used by Thai lawmakers, politicians, academics, and the media to better assess the rocky process of democratization and politicization in Thailand, and a tool that will help us better address the needs of the current political upheavals.

Last year, we conducted a nationwide opinion poll to gauge the national mood toward issues such as election reform, participation in politics, and amending the constitution. The survey, which was the first of its kind, found that most people in Thailand (95 percent) believe democracy to be the best form of government. It also corrected a popular misconception that Thailand was completely polarized (with the red shirts on one side and yellow on the other): around 15 percent consider themselves to be red shirts, roughly another 15 percent identify themselves as yellow shirts, and the vast majority falls somewhere in the middle.

The questionnaire for this year’s survey includes much from its 2009 predecessor and should reflect changes in perception in the aftermath of the recent turmoil. It also includes sections focused specifically on the origins of and potential solutions to the recent conflict. By recording the voices of ordinary Thai citizens across the country and increasing nationwide understanding, we hope the survey will contribute to political reconciliation. The results will at least confirm or disprove the belief that the population is diverging along more extreme lines and that the middle ground may be shrinking. In this on-going battle for the truth, such information can act as a valid warning system that will alert us to the depth of the divisions that lie beneath the surface of Thai society.

Pauline Tweedie is The Asia Foundation’s Deputy Country Representative in Thailand. She can be reached at [email protected].