This summer has been one of the hottest summers on record in Vietnam, with temperatures often rising above 100 F in many parts of the country. Low rainfall has rendered the country’s network of hydroelectrical power plants virtually useless, and rising energy consumption has outstripped the capacity of the state-owned energy sector, leading to rolling blackouts throughout the country in recent months. The unprecedented heat wave, however, has not kept many Vietnamese from following closely the debate over the government of Vietnam’s ambitious proposal for a high speed rail project linking Hanoi to Ho Chi Minh City – a proposal that had the mercury rising even higher within the walls of the National Assembly last month. 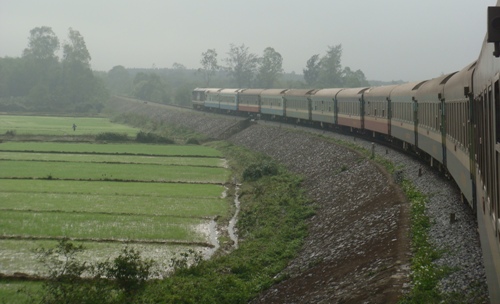 Vietnam recently proposed an ambitious plan for a high speed rail project planned to transport passengers on the 975-mile journey from Hanoi to Ho Chi Minh City in about five and a half hours, traveling at 186 miles per hour. Photo courtesy of Creative Commons Licenses.

Simply put, this was the biggest project proposal ever to come before the National Assembly (NA) for approval. According to the government’s preliminary investment report, the high speed rail will make the 975-mile journey from Hanoi to Ho Chi Minh City in about five and a half hours, traveling at 186 miles per hour. It will cost $56 billion to build, utilizing Japanese technology, and is expected to relocate nearly 10,000 households. The government hopes that funds will be generated from the government’s budget, the private sector, and official development assistance sources, particularly Japan.

Almost immediately, NA deputies raised concerns over the scope of the project and the paucity of information provided by the government. Meanwhile, experts cautioned that the rail’s final cost would likely be much more than the quoted $56 billion – nearly half of Vietnam’s current GDP – and would increase Vietnam’s public debt significantly. The government’s preliminary proposal offered only sketchy analysis on such critical factors as customer demand; economic gains, especially in comparison with other transportation modes such as airplane or car; investment needs; technological know-how; and system maintenance. Senior government officials insisted that the NA only needed to approve the rail project in principle. Once that approval was granted, then the government would move forward with more detailed plans for how such a high speed rail system would be funded and built.

Contrary to the government’s insistence that Vietnam must have high speed rail as an undisputed sign of modernization, and its seemingly unrealistic assumption that Vietnam’s continued growth will be able to cover the debt for such a costly undertaking, the country’s experts and intellectuals have sounded cautionary alarm in Vietnamese newspapers. They have presented careful counter arguments to the government’s preliminary proposal, and offered comparative discussions of lessons learned from high speed rail projects from countries as diverse as Korea and Germany to the United States. Online newspapers provided a platform for the public to debate the project as well. The online outlet VNExpress, for example, solicited its readers for views through an online survey. Out of more than 70,000 responses, 26.8 percent agreed with the government’s proposal, 36.3 percent disagreed; 35.8 percent believed high speed rail should be considered at another point in time; and 1.1 percent had “other views.”

Without the 50 percent needed for approval, on Saturday June 19, the NA voted no on the high speed rail project – a dramatic, surprising end to the month-long session. With some 20 percent of the NA deputies either not present or abstaining, 37.6 percent agreed with the government’s proposal while 42.2 percent disagreed. Calling it a “historic decision,” NA Deputy Nguyen Minh Thuyet, one of the most outspoken critics of the project, noted in an interview with VNExpress that, besides concerns over the enormous cost and low economic potential of the project, the no vote reflected the strong feeling among many NA deputies that the government did not carefully analyze the different options before submitting its report to the NA for consideration.

Although more than 90 percent of the NA deputies are also members of the Vietnamese Communist Party, the NA’s rejection of the government’s proposal reflects the evolution of this institution and underscores the latent and growing demand in this country of 86 million for broader social participation in key issues affecting the public and national development. As an increasingly sophisticated Vietnam continues to deepen its market-based growth and global integration, a critical challenge is how to coordinate meaningfully between the Party, the government, and the National Assembly to ensure a sound and competitive development agenda that has strong public support. This is bound to be a difficult and long-term process, but this remarkable vote on the government’s high speed rail project is a sign that it is happening.

Kim N. B. Ninh is The Asia Foundation’s Country Representative in Vietnam. She can be reached at [email protected].