Any casual observer walking through the heart of a district capital like Bangladesh’s northeastern city of Sylhet or Rangpur, further north, would be impressed by the bustling economic activity. In the early morning, streets are filled with colorful trucks honking their way toward the market place. Their paths are crossed by overloaded rickshaws delivering raw materials to nearby tailors and small manufacturers. Despite such signs of a vibrant economy, doing business in Bangladesh is far from easy. 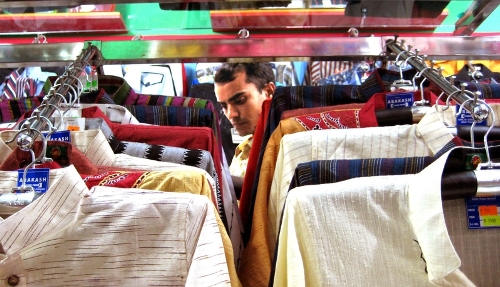 In Bangladesh, business people, such as this shop worker, face basic challenges that stunt their growth potential, including cumbersome administrative procedures and lack of transparency from authorities.

In Bangladesh, where The Asia Foundation works with micro, small, and medium enterprises (MSMEs) at the district level, business people often complain about cumbersome administrative procedures, unfair tax administrations, obsolete regulations, and an overall lack of transparency from authorities. As a poultry farmer in Rajshahi recently expressed, “If the government offices do not have copies of laws, regulations, or circulars, then how will they help us? And where would we seek help in solving our problems?”

Often, the first interaction local MSMEs have with the public sector is at the local level. Thus, the role of local public authorities and public officials is key to providing a business environment that favors business development. However, local authorities are often perceived as being unaware of the difficulties faced by local enterprises.

For the first time in Bangladesh, business people from 19 districts across the country were asked to express their opinions on their local business environments. The results –complemented with data from published sources – were combined into the just-released 2010 Bangladesh Economic Governance Index (EGI) which ranks the districts according to the quality of their business enabling environment.

The EGI assesses and ranks localities on specific aspects of their regulatory environments. Using a rigorous methodology pioneered by The Asia Foundation, the 2010 EGI is comprised of 10 sub-indices – such as entry costs, transparency, and informal charges – that are relevant to Bangladesh’s local business environment. The Asia Foundation worked with a local research institute, Data International, based in Bangladesh, which interviewed more than 3,800 firms of all sizes and all sectors to collect the data needed to construct the indices and sub-indices.

The survey respondents were selected randomly from a listing of 55,736 formal and informal enterprises, from the 19 districts. This listing, conducted by Data International prior to the survey, shows that Bangladesh’s economy is dominated by micro-enterprises. More than 97 percent of these firms employ less than 10 workers and less than 1 percent of firms have 20 or more employees. Seventy percent are in wholesale and retail trade activities, while the remaining firms are engaged in manufacturing services. The listing also confirms that the private sector in Bangladesh is dominated by men, with less than half of one percent of firms owned by women.

The survey reveals that the overall ranking of the 19 districts in the EGI indicates clear “high” performers (Faridpur, Dinajpur, and Kushtia) and “low” performers (Tangail, Chittagong, Barisal, and Rajshahi). However, about 42 percent of the districts are clustered in the “medium” category, indicating that with some effort, these districts could easily climb up the rankings.

The EGI also provides specific information on each of the sub-indices in the composite index. For example, the entry cost sub-index (covering both time and monetary costs), shows a huge difference in performance between the top district of Patuakhali (reaching 8.47 on a scale of 10), and the capital city of Dhaka (lagging behind with a score of just over 3 points). In Patuakhali, firms never wait more than three days to obtain a trade license or a VAT certificate, while it can take up to 20 days for the low-performing districts.

Another example shows how implementation of reforms can improve districts’ performance in the area of transparency and access to information. On the transparency sub-index, the western district of Kushtia scores very high with almost eight points, indicating that it provides easy access to documents to its business community. On the other hand, the bottom seven districts all scored four points or lower, revealing that many districts have problems with transparency-related issues. With targeted reform efforts, these districts could improve their ranking with little effort.

These examples show how the EGI provides an opportunity for the private sector and the national and local authorities to better understand the strengths and weaknesses of each district and to identify good practices across districts. Using the EGI, government officials, businesses, and other stakeholders will be better positioned to build strategic public-private partnerships to address weak links and advocate for priority reforms. For business owners, like the poultry farmer in Rajshahi, these reforms will be key to building a healthier business environment.

The Bangladesh EGI is part of the Local Economic Governance Program – Enhancing the Sustainability and Stakeholder Ownership of Investment Climate Reforms in Bangladesh – implemented by The Asia Foundation with BICF funding. BICF is managed by IFC, in partnership with the United Kingdom’s Department for International Development and the European Union.