[SLIDESHOW] Election Watch: Voters Take to the Polls in Indonesia

In 2010, an estimated 70 million Indonesians will vote in more than 250 local elections being held across the archipelago. For only the second time in the nation’s democratic history, citizens are now voting on a rolling basis for district-level executives. 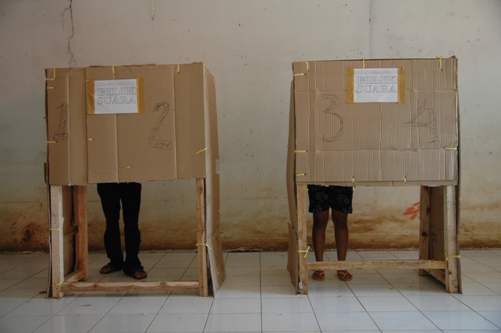 In a polling station located in a vacant storefront, two voters cast their votes in Bandung district local elections behind booths constructed by the polling station committee. Each committee reportedly received around $25 to support the operational costs of one polling station.

The importance of local elections is directly linked to decentralized governance, with local governments now having increased responsibility for service provision and increased accountability to voters.

While Indonesia has emerged as a strong and vibrant democracy, problems with elections administration, as well as sustained allegations of vote-buying, have marred the democratic process in some areas. Working with a network of mass-based civil society and faith-based organizations called the People’s Voter Education Network (JPPR), The Asia Foundation (with funding support from AusAID) was on-site to observe this year’s local elections in 10 districts across the country. 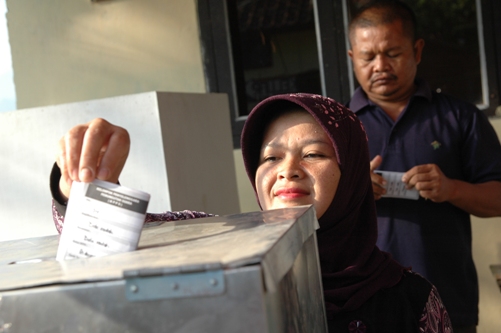 A woman casts her vote by placing it into the padlocked ballot box.

In Indonesia, civil society acts as the storehouse of experience about elections, and plays an important role in monitoring the administration of all phases of the election cycle, from the development of voter registration lists and registration of candidates to election campaigning and voting. An impartial assessment of the electoral process will be disseminated at both local and national levels, and this year’s data will inform the amendment of a package of laws governing future elections, which is currently being drafted by Parliament.

Watch a slideshow for a glimpse into one recent election day in Bandung district of West Java, beginning at 7 a.m. when polls open.

Laurel MacLaren is The Asia Foundation’s deputy country representative in Indonesia. She can be reached at [email protected].