Are Asia’s Capital Cities Victims of Their Own Success? A Look at Dhaka and Phnom Penh

In Bangladesh, where the 2010 Economic Governance Index – which measures and ranks business environments across 19 districts – was just released, the capital city of Dhaka did not perform among the top districts. Of course, in terms of business performance and investment, Dhaka remains Bangladesh’s single most important city. 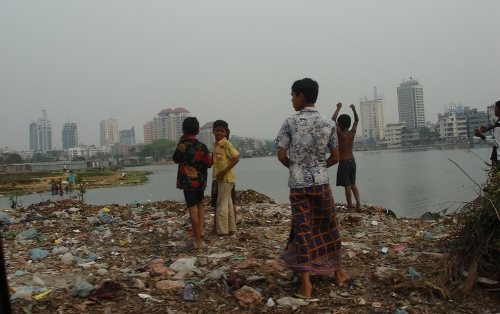 Bangladesh's capital and financial center, Dhaka, above, is home to both international and domestic banks, as well as the Dhaka Stock Exchange. Yet, it struggles with rapid urbanization - each day, nearly 5,000 new people move to Dhaka, the world's 10th most polluted city. Photo by Sanchita Saxena.

With nearly 10 percent of the country’s population of 150 million, Dhaka is the 9th most populous city in the world. With 15 percent of the national GDP, the city is the heart of Bangladesh’s financial sector, home to both international and domestic banks, as well as the Dhaka Stock Exchange. Thus, a paradox emerges. Although the city is the center of business activity, attracting both foreign and domestic investment, it is perceived by the private sector as having only the 10th best business environment in the country, out of 19 measured.

The situation in Cambodia’s capital, Phnom Penh, is even more grim. In both the 2006 and 2009 Provincial Business Environment Scorecards (PBES) – which similarly rank provinces according to the quality of their business environments – Phnom Penh came in last among all provinces. Like Dhaka, this result is puzzling. Phnom Penh is by far Cambodia’s most economically active and modern area, and along with the tourist city of Siem Reap, is crucial to national and foreign investment. From 1994 to 2004, Phnom Penh contained 77 percent of fixed FDI stock in the country, while Sihanoukville (the harbor) and Kandal (the nearby province with many garment factories) came in second and third with only 8 and 5 percent, respectively. Phnom Penh contained approximately 45 percent of all businesses in the country. Thus, to the casual observer, it is difficult to understand why this economically active city fairs so badly on the PBES index.

Unraveling why both of these capital cities rank so poorly requires delving deeper into the data. “Informal charges” (or bribes) for example, appear to be a major obstacle to doing business in both Dhaka and Phnom Penh. As the figure below shows,  Dhaka ranks second to last for informal charges – approximately 76 percent of firms in Dhaka, the most of any district, reported having to pay bribes in their line of work. 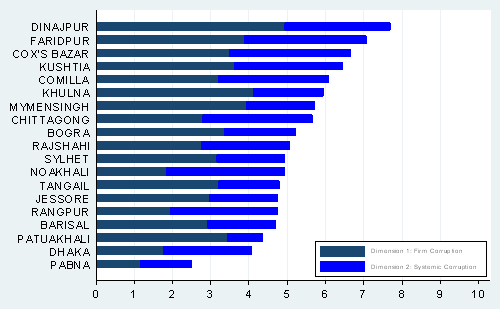 Data for Phnom Penh shows that, like Dhaka, its business owners are far more likely than other provinces to pay small bribes to local officials.

Both cities also did poorly on areas related to service delivery. Dhaka received a low EGI ranking for infrastructure, one of the most highly weighted sub-indices on the overall index. For Dhaka, both the scores for quality and availability of local infrastructure were poor and the city had the lowest percentage of paved roads out of total roads (60 percent) among all districts.

Service delivery was similarly poor in Phnom Penh. The capital ranked among the last on tax burdens for businesses and on efficiency and ease of the tax administration. In Phnom Penh, 66 percent of firms said that “negotiations with the tax authority were a normal part of doing business.”

Thus, are capital cities victims of their own success?

Given these results, it becomes clear why these capital cities are underperforming. For example, growth has brought more opportunities for rent-seeking, explaining the higher rates of informal fees in the capital cities. There are obviously also challenges of urbanization and population density, although to different extents for overpopulated Dhaka and the still relatively “provincial” Phnom Penh. In both cases, however, the administrative system and the capacity of public services have not been able to keep pace with the rapid population growth and private enterprise development.

The correlation between high population and low EGI index is illustrated by the examples of Bangladesh’s two largest cities, Dhaka and Chittagong. In both cases, data demonstrate the considerable governance challenges stemming from urbanization and overpopulation that mega cities have to deal with.

With growth, there is a natural Catch 22 – growth brings increasing demand from the private sector, which is then limited by an overstretched public sector with meager financial resources and human capacity. It also reveals the limits of an administrative system that badly needs reform and reorganization. One-Stop Shops for registration and licenses, public sector capacity building, and other efforts to streamline administrative procedures are then badly needed to improve economic governance in a significant way.

However, urbanization and overcrowding alone cannot explain away low EGI scores. For example, in Phnom Penh, entrepreneurs clearly blame the government for not being supportive enough, as only 32 percent rated officials’ attitudes as positive. In addition, only 18 percent believe that local institutions will protect their property rights. Of yet more concern, in the capital, poor governance has also affected the attitudes of local entrepreneurs toward their own business growth. Whereas 60 percent of entrepreneurs elsewhere in the country plan to expand operations over the next two years, just 45 percent of businesses in the capital have such plans. In fact, 3.6 percent of Phnom Penh firms are planning to close down in the next two years, compared to only 1 percent of firms in the rest of the country. Such findings reveal that poor governance contributes significantly to poor index rankings and poor economic performance.

Improving economic governance and business environments in Dhaka and Phnom Penh is all the more important, because for the foreseeable future, both cities will remain the mainstays of their respective economies, with the most investment activity, the largest share of business activity, and the most educated populations. Dhaka and Phnom Penh will still remain attractive to large-scale investors because of the big infrastructure hubs like airports and ports, as well as their proximity to markets, services, and public administrations. However, many other elements are making the choice of investing in capital cities much less attractive – cost of land and property, traffic jams, and higher administrative costs all make it difficult and costly to do business in these cities. If rapidly growing capital cities want to remain competitive and continue to offer opportunities and services to their ever-growing populations, they would be wise to look closely at these results and consider the improvement of economic governance and public services as extremely important priorities for their future well-being. Making such improvements will help them play a more dynamic role in economic growth and enable them to take full advantage of their positions as leading cities.