India’s Commonwealth Games: A Blessing or a Curse?

After months of controversy and nervous anticipation, on October 3 Indian President Pratibha Patil was joined by Prince Charles in New Delhi to open the XIX Commonwealth Games at a gala ceremony at Jawaharlal Nehru Stadium. Widespread concern that mismanagement and unusually severe monsoon rains would leave Delhi unready for the games proved wrong in the end, if just barely. Final touches on the 11 venues spread throughout Delhi continued until the very last minute when nearly 7,000 athletes from 71 countries converged on the city. 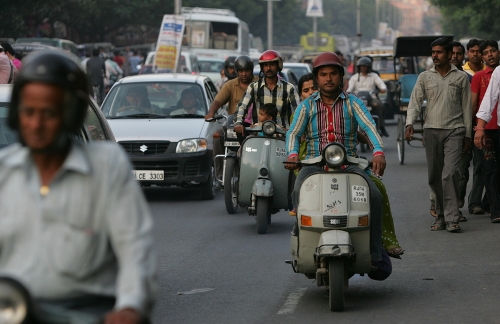 When India vied for the privilege to host the 2010 games, the intention was to showcase the country's emergence as a modern power and Delhi as a "world class" city. Photo by Karl Grobl.

At a cost estimated at $2.5 billion, (not including the city’s massive non-sports related infrastructural improvements estimated at up to $15 billion) these are by far the most expensive Commonwealth Games ever. In recent months, New Delhi has been completely made over with new sidewalks, footbridges, and traffic lights replaced throughout the city. Living in Delhi, I have shared Delhiites’ common preoccupation with the inconveniences. Returning home last week from a trip abroad, it seemed that it had all finally paid off. I landed at Indira Gandhi International Airport’s impressive new Terminal 3, drove past the new metro station being completed at Dhaula Kuan, and admired manicured roundabouts and road dividers still being planted in Chanakyapuri.

When India vied for the privilege to host the 2010 games, the intention was to showcase the country’s emergence as a modern power and Delhi as a “world class” city. Since then, controversies surrounding the games have laid bare the deep and growing divide between the two nations that India has become: the shiny new engine of economic growth seen by many in the West, and a country where 27.5 percent of the population still lives below the poverty line. An estimated 320 million people – nearly a third of India’s population – are malnourished. Although wealth and poverty live side-by-side in Delhi, the annual per capita income in the city is twice the national average. Beyond elegant, tree-lined boulevards left by the British are expanding areas of upscale condominiums and shopping malls.

Indians have long been ambivalent about the nature of economic growth in their country. The father of Indian independence, Mahatma Gandhi, believed that small is beautiful and saw India’s rural villages as its soul. India’s first Prime Minister, Jawaharlal Nehru, viewed commerce with suspicion and contempt. It was not until the early 1990s when the socialist policies his government instituted began to be dismantled that the private sector was unleashed. While Indians take pride in their country’s newfound economic growth, there is discomfort over growing disparities between rural and urban wealth. The conspicuous investment in New Delhi for the Commonwealth Games strikes many as an egregious misplacement of national resources and priorities.

The controversy peaked in July when maverick politician Mani Shankar Aiyar, a former sports minister and outspoken critic of the games, said he “would be very unhappy if the games are successful. He bemoaned that “thousands of crores are being spent on circuses like these while the common children are being deprived of basic facilities to play.” Although many called his outburst “anti-national,” it did lead senior government officials to admit their own concerns about the cost of the games and management of funds.

Cost overruns and corruption allegations have been a staple feature of domestic and international reporting in the lead-up to the games. Much of the wrath has focused on Suresh Kalmadi, chairman of the Organizing Committee, whose remarks at the opening ceremony on Sunday drew jeers from the crowd. A common refrain among average citizens has been “we know there’s corruption, but this has gone too far!” The collapse of a new footbridge near the national stadium in September and other evidence of sub-standard construction were decried as a “national shame.”

At the same time, according to Delhi’s Chief Minister Sheila Dikshit, the games have boosted the city’s infrastructure development by nearly 10 years, with improved roads, new buses, expanded metro lines, and world-class sports facilities. Supporters claim the urban improvements and international media exposure will attract business and lead to economic profit, especially in the tourism sector. However, the economic legacy of “hallmark” events has been mixed worldwide. Most Olympic Games have lost money for their host cities.

In addition, civil society groups have expressed concern over human rights abuses. They allege that over 100,000 slum dwellers had their homes demolished to make room for construction sites; that destitute persons and beggars were removed from the streets; and that sidewalk vendors were shifted away from sports venues. In the rush to complete venues and new infrastructure prior to the games, they say that workers were subjected to unusually long hours at minimum wages, often in hazardous working conditions with few safety precautions. There have also been allegations of child labor at construction sites.

With the opening ceremony a success and the games finally underway, Indians for the first time are experiencing a twinge of pride in their country hosting this mega event. The national debate over how to achieve and distribute economic growth will continue, as will court cases against corrupt officials charged with mismanaging funds. For Delhi residents like me, the most common reaction after next week’s closing ceremony may simply be a big sigh of relief that the games are behind us.

Nick Langton is The Asia Foundation’s country representative in India. He can be reached at [email protected].