The Malaysian state of Sabah on the northern point of Borneo, though resource-rich, has the highest poverty rate in the country. Official figures claim 16 percent, but unofficial sources put the poverty rate as high as 24 percent. Interestingly, the face of the poor in Sabah is quite unlike that of the rest of Malaysia. Sabah’s population is largely non-Malaysian, including many Indonesians and Filipinos who have migrated to Sabah (legally and illegally) for employment and to escape poverty in their own countries. 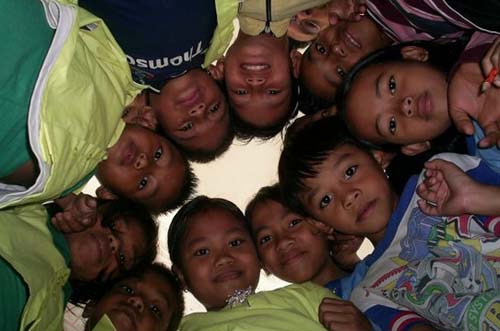 Since 2006, children in Sabah — Malaysia’s poorest state — who have no documents to prove their nationality have not been able to access government services, including health and education. Photo/Guruh Andrianto

Sabah’s GDP per capita is half the national average. Many of these migrants are employed in the palm oil sector. The demand for cheap labor in Sabah’s palm oil plantations and its labor-intensive production processes have kept the migrants coming since the 1970s. Many come with families or have started families since their arrival. This phenomenon has resulted in approximately 52,000 stateless children in Sabah as of last year.

Since 2006, children who have no documents to prove their nationality have not been able to access government services, including health and education. While documents are available upon application, the criteria and process for application is restrictive. Many parents in the migrant worker and indigenous communities do not know the application procedure to obtain the documents or simply cannot afford the travel costs or middlemen pay-offs required to get a child registered. In addition, Malaysia does not practice or guarantee citizenship by birth alone. A child must have a parent with a Malaysian Identity Card to confirm citizenship. Foreign parents have to register newborns with their respective consulate office. Indonesia has a consulate office in Kota Kinabalu (the capital of Sabah), but this means extra travel costs for the parents, which many cannot afford. The Philippines does not have a consulate in Sabah. Foreign workers are not allowed to marry, according to the immigration laws of Malaysia, and hence migrant marriages are conducted through customary or religious rites only. When a couple has a child, they are unable to register the birth because they are not legally married.

Whether the issue is legal status, poverty, or distance, the number of stateless children in Sabah is rising. These children, mainly from Indonesian and Philippine plantation workers, grow up on palm oil plantations and face a childhood without a single day in school. Others spend their childhood on the streets, as child laborers, and are exposed early to social ills like glue sniffing, drugs, petty crime, or child abuse. According to surveys, in certain areas more than 50 percent of children without schooling end up working as child laborers.

Since 1991, the Borneo Child Aid Society Sabah (BCAS), an independent, Malaysian-registered NGO, has been working to get these children off the streets and into school. The Society provides education to children aged 3 to 16 years who otherwise do not have access to schools due to legal status, poverty, or distance. BCAS currently educates more than 1,300 children in the towns of Lahad Datu, Semporna, and Kalabakan, and provides the main subjects of Bahasa Malaysia (Malay language), English, Mathematics, and Science, as well as arts and activities like singing and dancing. The first three learning centres started in 1991 in Lahad Datu at the request of local parents and children on the plantations. Since then, the Society has grown rapidly with more than 10,000 children in over 115 learning centres today. According to its Executive Director Torben Venning, the Society works closely with the Malaysian Ministry of Education to maintain its license to operate the learning centres. The Society is now looking at a higher degree of cooperation with the Ministry to increase collaboration with government schools in the same areas as the BCAS learning centres to better serve marginalized children residing in Sabah.  Some palm oil companies have also supported BCAS efforts as part of their corporate social responsibility programs, offering facilities for children’s learning.

One unique BCAS endeavor is the Bajau Laut floating school. The Bajau Laut minority are traditional seafarers who live most of their lives aboard family boats. Their lack of legal status means many children are unable to attend government schools. In response, BCAS started a “floating” school with a special curriculum developed by World Wide Fund For Nature (WWF) Malaysia that is highly relevant to their environment and emphasizes the environmental and economical importance of sustainable fishing and protection of reefs. 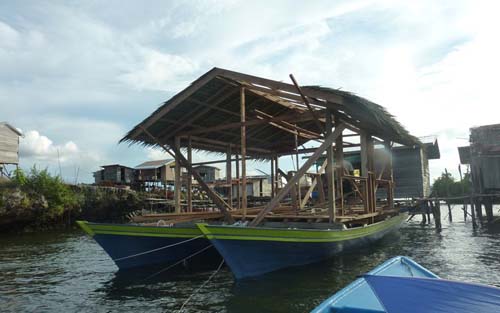 The Bajau Laut minority are traditional seafarers who live most of their lives aboard family boats. Their lack of legal status means many children are unable to attend government schools. In response, BCAS started a “floating” school, above.

So far, the results speak to the Society’s huge success: in the areas where BCAS learning centres operate, less than 10 percent of children end up on the street. More than half of the BCAS children graduating from 6th grade attend secondary school when they move back to Indonesia or the Philippines.

Many of these children now aspire to be teachers, nurses, doctors, and police officers. Very few say they want to stay on as plantation workers. Quality education is certainly one critical factor in a brighter future. The Asia Foundation supports BCAS through our Books for Asia program, which provides high-quality English-language books and resources to the BCAS learning centres. Despite such enthusiastic support, the issue of education for stateless children requires far greater attention by the federal and state governments of Malaysia. Similarly, oil palm companies which attract large numbers of migrants to sustain their profitability need to act to protect and promote the welfare of their workers and their families.

Anthea Mulakala is The Asia Foundation’s country representative in Malaysia. She can be reached at [email protected].