Mongolia, a vast but sparsely-populated country, established centers of urban administration and governance only over the past 60 years or so. Until the mid-1940s, Buddhist monasteries and residences of nobility were the only truly fixed settlements, and virtually all citizens lived in portable structures while herding sheep, horses, and other cattle on the country’s open plains. 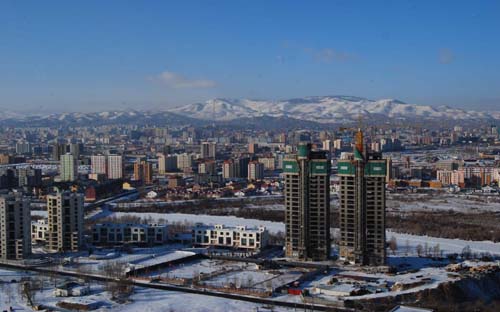 More than half of Mongolians now live in Ulaanbaatar, the country’s capital and largest city. Photo by Jon Jamieson.

Now, more than half of Mongolians inhabit Ulaanbaatar, the country’s capital and largest city, while ger, the Mongolian word for yurt, is now also a term for “suburb,” as more and more people gravitate toward the services and jobs available in urban areas.

The devolution of increased responsibility and authority to local government is the latest chapter in the country’s story of urban development. In 1992, the national government adopted a constitution which included a decentralized system of self-governance. Legislative assemblies and governors were established at all sub-levels of administration: the province, district, city, and neighborhood. The elected legislative body – called the Citizens’ Representative Khural, or Council – is responsible for economic and social development and land-use planning, selecting the governor, and reviewing government budgets and proposed plans.

While these jurisdictions are laid out on paper, governance in Mongolia is still heavily centralized, and local officials observe that citizens, frequently unclear on the distinctions between the variety of different bodies and their responsibilities, largely do not engage with government. This lack of participation inhibits the capacity of local governments to effectively meet the needs of constituents, a pressing matter as an increasing number are now settling in areas under their administration.

These challenges of urban governance – how to meet the various needs of a growing population, including a spike of migrants during and following a harsh winter – are familiar not only in the metropolis of Ulaanbaatar, but in Darkhan, Mongolia’s third largest city. With a population of less than 100,000 (to Ulaanbaatar’s 1.5 million), it is the industrial capital of Darkhan-Uul province, until recently boasting the country’s tallest building, at 16 stories. In April 2010, the chairman of the Darkhan-Uul Khural, Mr. L. Gunchin, suggested to the National Parliament that provinces adopt a mechanism for civic participation that would be similar to the forum established at the national level by President Elbegdorj in 2009. 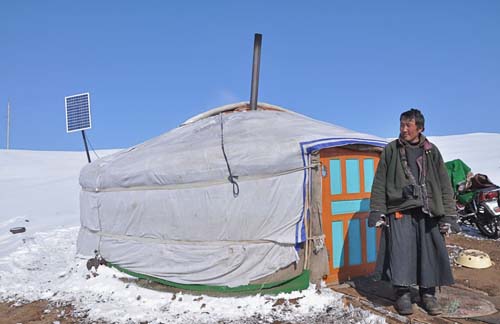 As more Mongolians move from traditional housing in gers (yurts) to urban centers, local governments struggle to meet the needs of a growing population. Photo by Matthew Pendergast.

Called the Citizens’ Hall, the meeting provides an opportunity for citizens to influence and improve government processes by providing commentary and feedback to the Citizens’ Representative Khural on draft policy measures. The Khural of the Darkhan-Uul province held the first provincial-level Citizens’ Hall in Mongolia’s history in April of 2010. To help foster these nascent efforts toward enhanced democracy and improved services, The Asia Foundation began supporting the Citizens’ Hall initiative in September 2010. Activities include eight Citizens’ Hall events, a provincial survey to establish priorities for Citizens’ Hall discussion topics, and a training on the importance of civic participation.

The first Citizens’ Hall took place one recent afternoon in the council room of the Darkhan-Uul provincial government offices in Darkhan city. The discussion focused on the scope and quality of public health services. Twenty-eight citizens between the ages of 25 and 67 attended: half were male, and 20 had obtained higher education. The event was publicized in the weeks prior through three local television channels, radio, newspaper, the government’s website, as well as the traditional bulletin board in the lobby of government offices. Registration for the event opened nine days in advance, with feedback in the form of letters and e-mails solicited from citizens who could not attend in person.

The input was varied, with complaints from citizens frustrated by overcrowded facilities and unaccountable doctors who often demand bribes for services, to suggestions from private medical professionals who favored relaxing permit requirements and forging public-private partnerships to enable their facilities to accept additional clients. Though not on the agenda, criticism of the health insurance system was also expressed.

Representatives from the public health department and the Khural alternately explained current practices (such as the reasoning behind building a new infant and maternity facility instead of rehabilitating one from the 1990s), and encouraged additional citizen feedback on the health sector master plan, present in numerous binders. They also charged citizens to report instances of corruption among doctors, while noting that qualified doctors are in short supply in the province and frequently overworked.

A number of the attendees also commended the Citizens’ Representative Khural for holding this event. For example, one man suggested that each neighborhood hold a meeting in advance of the larger Citizens’ Hall to discuss the proposed legislation in smaller groups, and then send a representative or two to the larger meeting to convey their views to the provincial representatives. To hear such perspectives from citizens not only encouraged the hope, as the secretary of the Khural articulated, that the Citizens’ Hall would soon be so well attended as to fill a theater, but reinforced the sense that providing such a mechanism for citizen involvement is timely and welcomed by that same constituency it was designed to engage.

The chairman closed the meeting by emphasizing that the citizens’ feedback will be publicized through news outlets and the Darkhan-Uul website, as well as announced during the opening of the next Citizens’ Hall to be held this month on the topic of protection of human rights in rural areas. As The Asia Foundation’s work with the communities of Darkhan-Uul province continue and word spreads regarding the impact of the Citizens’ Hall, the chairman and his colleagues anticipate that participation will continue to grow. Such success will undoubtedly increase opportunities for citizens as well as direct representatives of the people to shape the country’s rapidly developing urban future.

Tamara Failor is a program associate at The Asia Foundation. She can be reached at [email protected].