Peruse newspapers and online news outlets in Nepal and you will glean pieces of a very disturbing picture: gender-based violence (GBV) is frequent and takes many forms. In August, a woman in Eastern Nepal was severely beaten by her neighbors for allegedly practicing witchcraft. In November, three siblings lodged a complaint against their own father on the charge of beating their mother to death. After making the complaint, they had to flee their village in fear of reprisal from their father and family members. 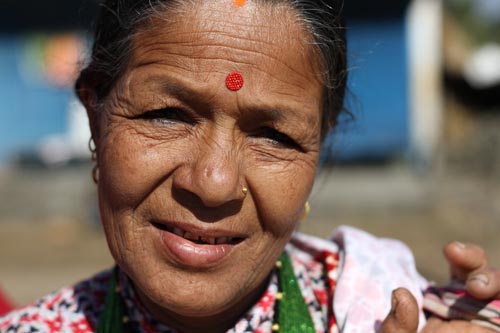 Political instability, a decade-long civil war, and extreme poverty have for the most part overshadowed the issue of gender-based violence in Nepal. The past year saw a marked increase in political will when Nepal's prime minister declared 2010 as the year to combat GBV. Photo by Jon Jamieson.

Also in November, a woman was strangled by her husband in Parsa over a dowry dispute. This month, a government employee was arrested for raping one of his domestic helpers; she was terrified of retribution and being thrown out of the house and therefore did not reveal what had happened until a week later.

The cases above are just the tip of the iceberg. Statistics present a grave situation among women in Nepal, especially those who are widows or from marginalized communities. In Nepal, an estimated 81 percent of women in rural communities face recurring domestic violence. Nepali women and girls are vulnerable to both domestic and public violence, such as rape, sexual abuse in the workplace, and human trafficking. Moreover, harmful traditional practices, such as dowry-related violence, Deuki (offering infant girls to temples where they live without education or proper care), Chhaupadi (keeping menstruating women in a shed away from the home), and accusations of witchcraft, can also be life threatening. Surveys also indicate that 23 percent of women and 20 percent of men in Nepal believe that domestic violence is acceptable.

Political instability, a decade-long civil war, and extreme poverty have for the most part overshadowed this shameful issue. As the world’s newest republic, there is no doubt that the country is in the midst of a massive transition, rife with both challenges and opportunities. Against this backdrop, many NGOs and community activists have worked to bring more attention to the issue of GBV. The Government of Nepal is now capitalizing on these sweeping changes by expanding and harmonizing these burgeoning anti-GBV efforts.

The past year saw a marked increase in political will when Nepal’s prime minister declared 2010 as the year to combat GBV. He announced the establishment of a unit within his office to monitor GBV-related complaints and subsequent government action. To support this important effort, The Asia Foundation, together with the UK Department for International Development (DFID), the Prime Minister’s gender advisor, and other agencies, has been providing support to the GBV Unit in order to help it increase its overall capacity to respond to cases of GBV at the policy level, coordinate state responses to GBV, and increase the visibility of this pressing issue at both national and local levels.

Over the past year, the GBV Unit has secured the signed commitment of 11 different ministries to combat GBV. Consequently, these ministries have started implementing action plans to combat GBV in their respective spheres of influence. For example, the Ministry of Health and Population has incorporated GBV-related issues into the National Safe Motherhood Plan and Nepal Health Sector Implementation plan. The Foundation helped the GBV Unit develop a media campaign that advises on ways to partner with the media to highlight the work of the Nepali Government in combating GBV. The Unit has also closely monitored GBV incidences reported through the media, police, and others in order to ensure that the government has its finger on the pulse of current and evolving trends. The Unit has also begun providing oversight of the government’s GBV interventions, and is taking steps to ensure that concerned ministries are fulfilling their roles in providing resources for women to reduce their vulnerability to GBV. During the global campaign “16 Days of Activism Against Gender Violence” in December, the prime minister’s office was front and center, reiterating the government’s commitment to tackling gender violence through radio jingles, a documentary, tag lines, a television commercial, and a widely publicized public event to generate excitement around the campaign.

Despite progress, one thing has become evident: one year is not enough. The “Year to Combat GBV” needs to carry on into 2011 and beyond. After the lone candidate for prime minister withdrew from voting last week, restarting the election process after 16 tries, there is still no consensus on who will lead the country. Amid this political impasse, it is essential that the GBV Unit be seen as an institutionalized, non-partisan arm that addresses not just the “pet interests” of a prime minister, but also the pressing public issues that need commitment from the highest levels of government. The Unit also needs to ensure that the action plan made by the 11 ministries to combat GBV is being carried out and provides guidance and exert influence when they get stuck. Building on a preliminary mapping conducted by The Asia Foundation last year, we are helping the GBV Unit conduct a separate, more robust study examining gender violence which will serve as a resource for all service providers as well as the government. It will also be critical that all organizations working on GBV issues share their ongoing activities and research with the prime minister’s office to minimize duplication.

The government of Nepal has taken important steps in 2010; and going forward we will continue to work with the prime minister to ensure that gender violence does not fall out of the government purview, despite continued political uncertainty. The GBV Unit demonstrates that even in the midst of political deadlock, some issues are important enough to rise to the top and gain support from all sides.

Diana Fernandez is a program officer in The Asia Foundation’s Nepal office. She can be reached at [email protected].