Cambodia’s Fish and Mekong Dams: Can They Co-Exist?

For over one million people, Cambodia’s Tonle Sap Lake is the pulse of life. Southeast Asia’s largest freshwater lake is a natural floodplain reservoir and drains into the Mekong River via the Tonle Sap River. Every year, the lake observes a phenomenal natural occurrence: the Mekong rises and flows into the Tonle Sap, expanding its area over five times, from roughly 3,000 square kilometers to16,000 square kilometers. The Tonle Sap – where entire families play vital roles in harvesting fish – is an astoundingly rich, hydrological force for Cambodia’s rural citizens who depend on the lake’s bounty of life. 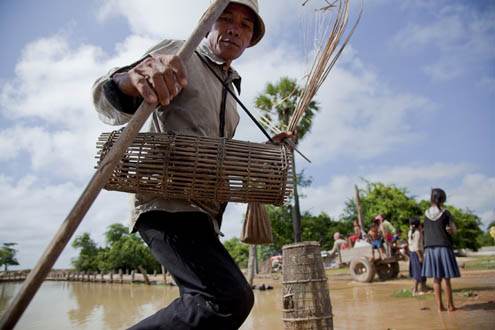 Locals harvest fish on Cambodia's Stung Sen River, a major tributary of the Tonle Sap Lake. Concern about the potential removal of fisheries from hydropower dams are particularly strong in Cambodia, where as much as 80 percent of national animal protein consumed comes from fish. Photo: Nicolas Axelrod/asiamotion.net

Last month, I represented The Asia Foundation at the monthly Technical Working Group of Fisheries at Cambodia’s Ministry of Agriculture, Forestry, and Fisheries. Aside from dialogue on fish catches in the Tonle Sap and the impending climate change implications on fish species, the group also discussed the ongoing dam question: With the planned construction in 2015 of 12 mainstream hydropower dams on the Mekong River – eight in Laos, two at the Laos-Thai border, and two in Cambodia – what will be the impact on fish and Cambodian livelihoods? Many raised concerns that fish species could decrease, the natural flow of sediment may decline, the nutritional health of Cambodians – whose primary protein comes from fish – might fall, and livelihoods dependent on fishing might diminish. But, the facts behind these concerns are still vigorously debated, both among ordinary citizens and in decision-making circles.

For some time, dams have grabbed center stage of discussions on energy, climate change, and human livelihood. Hydropower projects have emerged from the waters of the Mekong River along six of the countries it sustains: China, Myanmar, Laos, Thailand, Vietnam, and Cambodia. As the 12th longest river in the world, just shy of 5,000 kilometers (approximately 3,100 miles), the Mekong is Southeast Asia’s lifeline. Upwards of 60 million people rely on the waters for their livelihoods and food security. It provides life to a rich ecosystem – second only to the Amazon in terms of biodiversity – and supports the world’s largest inland fishery. According to the Mekong River Commission (MRC), the Mekong supplies 2.6 million tons ($2 billion’s worth) of wild fish and other aquatic resources a year. Including the secondary markets involved – such as processing, packaging, and marketing of fish – the Mekong River fisheries are said to be valued at between $5.6 billion to $9.4 billion per year, according to a recent report from the International Centre for Environmental Management (ICEM). It’s no wonder that the meaning of the river’s name – varying from country-to-country – means “Mother of Water” and “Great River.”

While national priorities such as power security, economic development, and the environment are critical and pressing, the implications of these hydropower dams on the fishing sector and food security are profound. Seventy percent of communities are rural in this river basin, where inland fisheries are among the most intensive in the world. Should 11 of the 12 mainstream dams be constructed, the ICEM report projects that the total loss in fish could be between 26 and 42 percent of the baseline recorded in 2000, representing between 550,000 and 880,000 tons of fish, respectively. The removal of fisheries may negatively impact human nutritional health, particularly in Cambodia, where as much as 80 percent of national animal protein consumed comes from fish. Though hydropower dams have significant economic benefits, the social and environmental impacts – as well as the potential costs to livelihoods that for hundreds of years have depended on fish and other natural resources – are an important part of the debate that is increasingly being considered.

On the other hand, Cambodia stands to benefit from a less expensive and more secure national power supply with Mekong mainstream dams. When done right, hydropower dams can provide an engine of economic development, clean energy, and poverty alleviation efforts. The ICEM report predicts that the 12 mainstream dams would supply 23 to 28 percent of national hydropower potential of the four lower Mekong Basin countries. Cambodia has a very limited range of alternative energy sources for meeting its power demand, and is heavily dependent on imported fossil fuels. Moreover, Cambodia has one of the world’s highest electricity costs and surpasses all ASEAN countries with the most expensive electricity. With hydropower, Cambodia has the potential to diversify its energy sources away from imported coal and power. If all 12 mainstream dams were to be constructed, Cambodia stands to receive $1.2 billion per year (equivalent to 30 percent of export revenues). Demand for labor, construction materials, and equipment could also further stimulate Cambodia’s economy.

Transboundary water sharing and water management issues are not new, of course, in Southeast Asia. All four lower Mekong countries – regardless of magnitude of dam impact – need to come together to formulate a thoughtful plan prior to dam construction. In March, the four countries will contribute their assessments to the MRC to decide whether or not the Sayabouly Dam will be constructed in Laos. And while Vietnam and Thailand may benefit from an increased, diversified energy stock, they may also need to assess dam construction implications on both their land and fish. Moreover, given its visible role on the subject, China may need to balance its participation in some of these roundtables.

Cambodia’s reliance on and co-existence with its fish may very well be equally as important as its need for lower electricity costs and rural electricity coverage. These extremely complex and difficult decisions reveal the tantamount importance of participatory planning in decision making – pre and post dam construction – of community fishers, local farmers, and lives that depend on the Mekong – millions of people whose voices cannot go unheard in these generational, life changing decisions.

Michelle L. Chang is a program associate in The Asia Foundation’s Cambodia office. She can be reached at [email protected].