Without Representation, Women’s Rights in Afghanistan Risk Being Negotiated Away

Below is an excerpt from a blog post written by The Asia Foundation’s experts in Afghanistan that originally appeared on WomenforWomen.org on International Women’s Day.

The Asia Foundation 2010 Survey of the Afghan People found that 83 percent of respondents approve of the government’s efforts at negotiation and reconciliation with armed anti-government elements; 44 per cent of all respondents were women. Thus, we can safely say that Afghan women want peace. However, men are more supportive of the reintegration efforts than women. While almost nine out of 10 male respondents or 88 percent say they agree with this approach, with half saying they strongly agree, this is true for just under eight out of 10 women or 78 percent and only a third strongly agree. 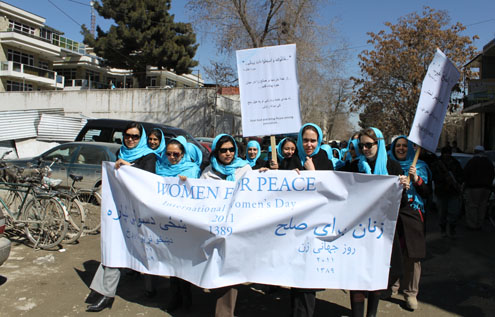 The Asia Foundation's staff (and authors of this piece) participate in its first International Women's Day "Women in Peace" walk in Kabul.

Almost twice as many women say they oppose these efforts. These findings may indicate a level of concern amongst Afghan women regarding a negotiated settlement with the Taliban, whose regime imposed major restrictions on women’s participation in Afghan society at all levels.

Many Afghan women welcome support from the international community in helping to ensure that gender-based concerns are discussed as part of the peace process, not just symbolically but effectively. It would be helpful for the international women’s community to also push alongside their sisters in Afghanistan for a peace that includes women’s concerns and does not compromise on women’s rights as enshrined in the constitution and Qur’an, with an understanding that this is a very sensitive topic.

The only assurance of progress and acceptance in relation to women’s concerns is if movements for change are movements from within. A definitive action would be for the women of the world to question their own governments on the assistance they provide to Afghanistan and to put pressure on decision-makers to include caveats and financial support for women’s issues and genuine participation of women.

On Nov. 10, 2010, representatives from the UN and Afghan and international NGOs met in Kabul to discuss Peace, Reconciliation, and Justice. Although the head of the Joint Secretariat of the High Peace Council addressed the participants, the conference attendees were limited and allowed for little participation beyond the invitees. According to the United States Institute for Peace, the discussions unveiled disagreement about the inclusion of former militia leaders in the National-level High Peace Council (HPC) and discontent with the lack of transparency in its activities. It also became apparent that there is little clarification on what reconciliation means in practice, particularly with respect to accountability for abuses that occurred during the rule of the Taliban as well as those that occurred during ethnic strife before the Taliban came to power.

This coincides with women’s concerns about trust and transparency. Women are concerned about a lack of inclusion of women’s voices and views in the peace process and if they are being integrated enough or at all. Women so far have very symbolic roles in the HPC and have very little role or presence in the Provincial Peace Councils (PPCs).

Without women’s representation, there is no guarantee that women’s rights will not be negotiated away in the efforts to bring peace to the country. It is clear that all women feel that there should be no compromise on progress that has been made over the last 10 years or on women’s rights as enshrined in the constitution and in the Qur’an.

Afghan women need the government to be transparent and open about the peace process. They need to share information on a regular basis and seek input from Afghan women before sitting at the negotiation table. The women of Afghanistan would like assurances that not only will there be a focus on women-led programs through its APRP Joint Secretariat, but also that the PPCs include a 40 percent representation from female leaders. In this way, the government can work toward establishing a balanced peace.

Additionally, we would ask that government not leave out black-listed groups, groups based in other countries or minorities and that neighboring countries must be included in the peace process and agreement. It is imperative that the government ensures that all parties follow through on agreements with international monitoring or observation groups that hold them accountable.

Another major concern is that rising insecurity in Afghanistan threatens not only the peace process itself, but also women’s ability to rise up and speak with one voice. Insecurity ensures women are fearful of speaking out and that coordination and networking ties amongst women around the country are broken.

Read the full piece on WomenforWomen.org.