“Revolution is in the air … and there are thousands of people demanding their universal human rights. …We are witnessing attempts to suppress the aspirations of the people and this lends an urgency to this year’s event, which will provide an exchange of ideas on the rapidly unfolding events and what can be done to shape positive outcomes,” said the Brookings Institution’s Martin Indyk at the opening of the 2011 U.S.-Islamic World Forum. 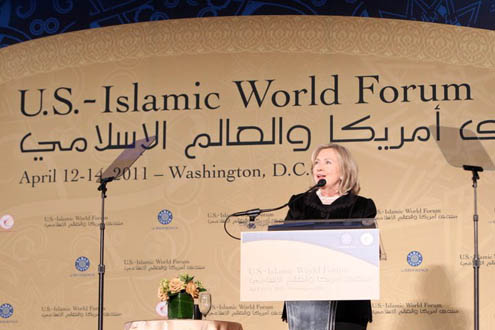 The Forum, convened by the Brookings Institution and the Ministry of Foreign Affairs for the State of Qatar, is currently taking place in Washington, D.C., with the participation of business leaders, analysts, journalists, and religious figures from more than 30 Muslim-majority countries and the United States. The focus of this year’s Forum is the rapid, turbulent change currently taking place across the Middle East and the implications for Muslims around the world.

The forum includes sessions on issues critical to the Arab and Muslim worlds, including geo-strategic issues in the Middle East and South Asia, as well as working groups focused on building partnerships on key issues such as the role of Muslim civil society, U.S.-Muslim engagement, the role of the media and culture, religious minorities, and development. The forum also includes a significant portion of the agenda for working group discussions on issues of relevance to U.S.-Muslim engagement. The one I attended brought together members of the Muslim non-profit community from Somalia, Egypt, the UAE, the United Kingdom, and the United States to generate recommendations and new thinking on how Muslim leaders and organizations can work more effectively in community development and civil society.

In many of the sessions, participants highlighted the unfortunate proliferation of ineffective leadership training provided to the Muslim community – to Muslim spiritual leaders, Muslim youth, and Muslim women. One participant cautioned against the supply-side model of development assistance which so often dominates the provision of foreign aid, advising foreign government aid agencies to ask these communities “what do you want and what do you need?” rather than making assumptions and imposing an American model of civil society participation or empowerment. A leadership trainer from the UAE pointed to a lack of “vision” in much of such training, which has resulted in thousands of Muslims across the world having been trained to be “leaders” without a clear sense of their own mission and goals.  Another said there’s a need to educate government donors on how to effectively and appropriately provide support to Muslim communities. She used as an example a ludicrous request she had received from a donor to assess the success of a health services program they supported by measuring the reduction in the percentage of women in the target community who wear a headscarf or veil.

Alhough the forum included a session on Afghanistan and Pakistan, many parts of Asia, including the vast Muslim populations in Indonesia, Malaysia, Bangladesh, were underrepresented.  The Asia Foundation’s panel on the role of religious leaders in development was an exception.  Moderated by the Foundation’s Country Representative in Indonesia, Dr. Robin Bush, the panel brought together Muslim voices from Indonesia, Malaysia, Bangladesh, and the Philippines. Asia is home to the largest number of Muslims in the world, with, for example, more than 210 million in Indonesia alone. As the Asian Muslim world is undeniably influenced and shaped by events unfolding in the Middle East, the inclusion of these voices and perspectives is critical.

For me, attending this U.S.-Islamic World Forum, the first ever held in the U.S., one of the high points was Secretary Clinton’s keynote speech where she said, “The United States certainly does not have all the answers. In fact, here in Washington we’re struggling to thrash out answers to our own difficult political and economic questions. But America is committed to working as a partner to help unlock the region’s potential and to help realize its hopes for change.” She also addressed the unprecedented moment in history we now find ourselves in: “In the 21st century, the material conditions of people’s lives have greater impact on national stability and security than ever before. The balance of power is no longer measured by counting tanks and missiles alone. Now strategists must factor in the growing influence of citizens themselves – connected, organized, and frustrated.”

Rosita MacDonald is a senior program officer for The Asia Foundation’s Governance, Law, and Civil Society program, based in San Francisco. She can be reached at [email protected].