Does Recent Spike in Religious Intolerance Signal a Conservative Turn in Indonesian Islam?

In Indonesia, the local English-language press frequently covers stories of houses of worship being forcibly closed, members of minority religions being harassed, and government ministers lunching with radical groups or calling for minority religions to be outlawed. In early February, attacks on the marginal Islamic sect Ahmadiyah and church burnings dominated local news headlines. 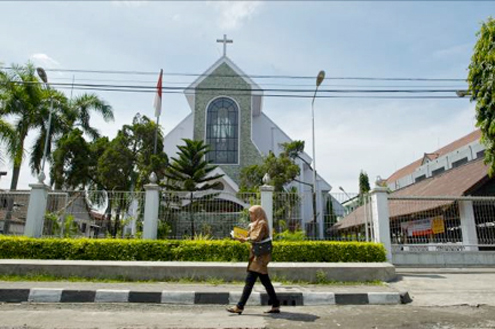 A Muslim woman walks past a Catholic Church in Yogyakarta, just two hours away from three churches that were recently burnt down by a mob. Photo by Ted Alcorn, www.tedalcorn.com.

In the first instance, an angry mob of 1,500 stormed a house belonging to a member of Ahmadiyah in Cieusik, West Java. Wielding bamboo batons and cries of “God is Great,” the mob viciously beat to death three Ahmadiyah followers. Meanwhile, the police stood by, making only feeble attempts to prevent the violence. Less than 48 hours later, another mob attacked and burnt to the ground three Christian churches in the central Javanese town of Temanggung in retaliation for what was perceived to be a lenient proposed sentence for a Christian man accused of blasphemy. As this coverage becomes more and more commonplace, many observers and analysts are now asking: What is going on with Indonesian Islam and is it finally making a conservative turn?

These findings come on the back of several years of debate over the rights of minority religions in Indonesia. Debate has rallied around the impact of the 2006 Ministerial Decree on Houses of Worship which was issued to regulate the building of houses of worship, with the intention of promoting religious harmony. Activists, however, argue that the decree discriminates against minority religions and is used to justify attacks on followers of minority religions and their places of worship. Divisive debate is also underway related to calls for a 1965 Blasphemy law to be overturned, as some claim it goes against the secular foundations of the Indonesian state. After a high-profile constitutional review process last year, a motion to annul or revise the law failed with only one out of the nine judges offering a dissenting opinion. Religious freedom activists continue to contend that the law and a 2008 Ministerial Decree on Ahmadiyah, which bans the sect from propagating its beliefs, are restricting religious freedom and used to justify attacks on minority religions.

Paradoxically, a by-product of the post-Suharto political freedoms secured by Indonesians after 1998 is the emergence of inter/intra religious tensions and violence. Many older Indonesians outside of the formal structures of religious organizations often say that things never used to be this complicated; at the community level, they reminisce, nobody ever really thought about what someone else’s religion was, religion did not define a person in the past, and there was rarely religion-related violence. Of course, they are referring to the 32-year rule of Suharto (1966-1998) when freedom of speech and political expression of religion was firmly stymied. In this environment, the possibility of religious conflict was minimal. Now, myriad voices from across the spectrum of Islamic discourse are heard – from the radical to the liberal with numerous viewpoints in between. This is forcing Indonesian Muslims to confront their Islamic identities and choose what kind of Islam they want to shape their country. 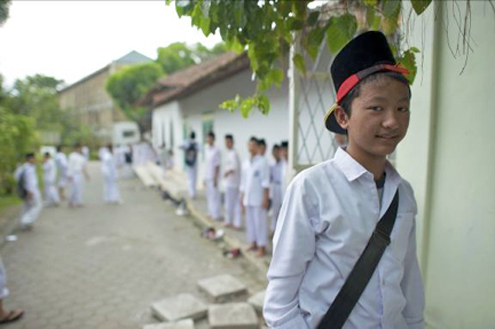 An Islamic junior high school student in Central Java on his way to pray at his school's mosque, wearing both the baseball cap and Islamic peci hat. Photo by Ted Alcorn, www.tedalcorn.com.

Right now, the loudest voices are hardliners who attempt to represent public opinion despite the silent majority of Indonesians who profess mainstream and pluralistic views. In some cases, government officials and the police act based on what they think the public wants, which can lead to repression of religious freedom, as it is often the actions and opinions of hardliners that make headlines, not the millions of daily inter-faith interactions and acts of tolerance between followers of various religions.

Some observers see the future of Islam in Indonesia as being at stake. Yet this view ignores the historical tug-of-war among Muslims over what role Islam should play in shaping Indonesia – the most populous Muslim country in the world. Beginning during the formulation of the 1945 Constitution there was an effort to insert the Jakarta Charter – a brief statement that Muslims should follow shariah – into the preamble of the Constitution. The charter was hotly debated revealing the divisions early on between Muslims seeking greater influence for Islam in public life and those preferring to shape a more secular nation. The Jakarta Charter was rejected at the time but not totally put to rest; it was revisited in 1959, 1967, and again as recently as 2001 and 2002. In all occasions it spurred debate but was rejected by the Indonesian public.

The recent church burnings and attacks on Ahmadiyah clearly reflect religious intolerance and are inexcusable crimes for which the state has the responsibility to convict the perpetrators. They also highlight the increased freedom that hard-line Islamic groups have to wage violence, and the inefficacy of the government in standing up to these groups. Without excusing violence, however, it is important to understand that the recent rise in incidences of religious intolerance is part of a longer process to sort out what kind of role Islam should play in shaping Indonesia, rather than constituting a sudden turn toward Islamic conservatism. This process needs to be supported by strengthened rule of law and earnest efforts on the part of the state and civil society to facilitate peaceful dialogue and ensure tolerant and non-violent values throughout communities.

Clare Harvey is a program officer with The Asia Foundation in Indonesia. She can be reached at [email protected].