One month after the devastating earthquake and tsunami struck Japan, the Japanese are still coping with an incredible accumulation of sorrow, devastation, and anxiety about the future. Beyond the most urgent question of how Japan will recover from such a calamitous situation, a secondary concern is the potential human, environmental, and economic impact the crisis will have on the rest of Asia. 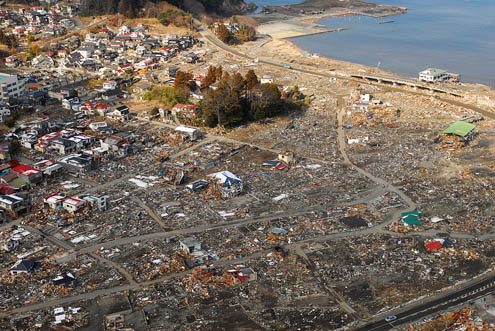 One month after the Japan earthquake and tsunami, the Japanese are still coping with an incredible accumulation of sorrow, devastation, and anxiety about the future. Photo courtesy of U.S. Navy.

It is difficult and certainly too early to determine the full impact of Japan’s triple trauma – an earthquake, tsunami, and ongoing nuclear disaster. While the World Bank estimates the financial cost of the earthquake and tsunami at $235 billion, the human and economic consequences of a possible nuclear catastrophe is still hanging in the air, for both Japan and its Asian neighbors, like the sword of Damocles.

Economists seem to agree that the disaster is not likely to pose a significant, long-term risk to the global economy. It is, however, likely that Asia, and more particularly East Asia, will feel the economic aftershocks of Japan’s earthquake in both the short and the long term. The World Bank’s chief regional economist, Vikram Nehru, said that in the immediate future, the major impact of the disaster on Asia will be in terms of trade and finance. Indeed, several economic and financial dynamics may be affected:

Japan’s tragic nuclear disaster will most certainly have unexpected long-term impact. However, on almost all accounts, the disaster’s potential impact on Asia will likely be short and mid term. The reconstruction efforts may take longer than after the Kobe earthquake in 1995, but to believe that this unprecedented disaster will weaken Japan in the long term would be discounting the resilience and innovative capacity of the Japanese people.

Véronique Salze-Lozac’h is The Asia Foundation’s regional director for Economic programs based in Cambodia. She can be reached at [email protected].