On April 16, citizens of Malaysia’s largest state, Sarawak, will go to the polls for the state’s 10th elections, where 213 candidates are vying for 71 seats. Since the first state election after independence in 1969, the ruling Barisan Nasional (BN) has won every state election in Sarawak. Will this one be any different?

Sarawak’s population of 2.2 million is made up of 27 ethnic groups, speaking more than 40 languages. The indigenous, multi-ethnic Orang Ulu comprise 44 percent of the population, with the Iban constituting the largest group. Chinese make up 26 percent, while Malays make up 21 percent. 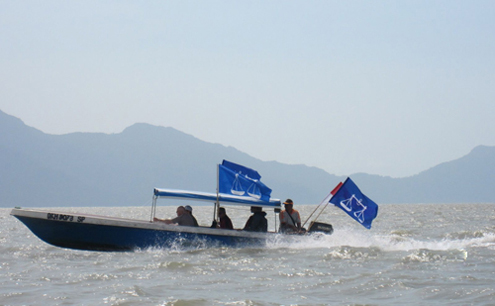 Campaign flags fly for the Barisan Nasional in the run-up to Sarawak's state elections. Photo by Anthea Mulakala.

These state elections are significant for two reasons. First, Prime Minister Najib Razak is likely to call the country’s 13th general elections this year, well before the 2013 deadline. Sarawak provides Malaysia’s BN coalition with one-fifth of its 137 members in the federal parliament. The state election outcome may provide a barometer of how Sarawakians will vote in the general election, and could tip the balance of power for or against the BN. Since the politically charged 2008 general elections, when the BN lost its two-thirds majority in parliament, the government has been determined to regain its ground. So, Prime Minister Najib has been on the campaign trail across Sarawak, supporting his coalition candidates to maintain BN’s stronghold over what is often considered the coalition’s “fixed deposit” votes.

Opposition politicians claim the BN is worried. In the 2006 state elections, the BN captured 63 of 71 seats. In a state where the BN has historically commanded 90 percent of the seats, losing eight seats represented a significant blow, especially when coupled with a drop in the popular vote to below 63 percent. A significant swing came from urban Chinese voters who are increasingly losing confidence in what they see as a corrupt state government. The opposition Parti Keadilan Rakyat (PKR), led by Anwar Ibrahim, is confident that Chinese voters will further this anti-BN trend and further increase its representation in 2011.

Realistically, though, the opposition is unlikely to win control of Sarawak or deny the BN’s two-thirds majority, even though the main Chinese opposition party, the Democratic Action Party (DAP), is drawing large crowds of supporters in Sarawak’s major cities. However, even a small gain by the opposition will trigger alarms within the BN in the run-up to the 13th general elections.

Second, the 10th state elections could mark a major historical event in Sarawakian politics when and if Chief Minister Abdul Taib Mahmud steps down after 30 years in office. From the Melanau ethnic group, 74-year-old Taib has served as chief minister since 1981. Though the 2006 elections were portrayed as being his last, Taib is running again in 2011. However, on March 21, Taib strategically dissolved parliament, called elections, and announced that he would retire as chief minister after the 2011 polls.

The chief minister is perhaps the most colorful and controversial of Malaysia’s politicians. As the state’s finance minister, he exerts extraordinary control over Sarawak’s wealth and development. It has also been said that Taib is one of the most corrupt men in Malaysia. His colossal wealth in Sarawak and abroad is said to be derived from corruption and the destruction of the state’s rainforest through logging and oil palm plantations. In February, the Bruno Manser Fund (BMF), an international organization committed to protecting rain forests and their inhabitants, published an exposé on Taib’s wealth, printing a blacklist of 49 Taib companies in eight countries which are thought to be worth hundreds of millions, if not billions, of U.S. dollars. The BMF asserts that these assets should be “restituted to the people of Sarawak, and the Taib family should be prosecuted for corruption, abuse of public funds, fraud, money-laundering, tax evasion, and other related crimes.” The DAP has also accused Taib of failing to account for a staggering RM4.8 billion (USD1.58 billion) of Sarawak’s funds over the past three years. Several parties, including Transparency International Malaysia, have lodged reports against Taib through the Malaysian Anti-Corruption Commission, but to date no action has been taken.

Yet Taib remains as chief minister, will stand for reelection, and is assured to secure the majority of the votes for the BN on April 16. Sarawak’s rural hinterland is the backbone of BN’s support, constituting 70 percent of the seats. Rural indigenous Sarawakians worry that a vote against the government will deprive their state of much-needed development. Despite what they think of their chief minister, this fear has sustained the loyalty and patronage networks that have kept Taib at the helm for three decades. Change will depend on Taib’s successor, who is yet to be named. Taib claims he is grooming several candidates, but for most Sarawakians it remains a mystery who they may be. The people will be anxious for an announcement soon after April 16 elections.

Sarawak’s election results could cement Prime Minister Najib’s confidence of a general election rebound for the BN. Alternatively, a few extra opposition seats would reinvigorate Anwar’s fledgling opposition coalition. Will one of South East Asia’s longest serving politicians actually retire? With less than a week to go, all eyes are on Sarawak.

Anthea Mulakala is The Asia Foundation’s country representative in Malaysia and regional advisor for donor relations. She can be reached at [email protected].