Bangladeshi communities – living in a nation recently dubbed “climate change ground zero” – have been quietly innovating and adapting to climate change in their backyards for some time. In coastal areas, floating gardens supply families with fresh vegetables in once dry, but now water logged areas. Concrete jars around houses capture and store rain water for times of potable water scarcity, a reality that’s becoming more and more commonplace for Bangladeshis vulnerable to an encroaching, rising sea. 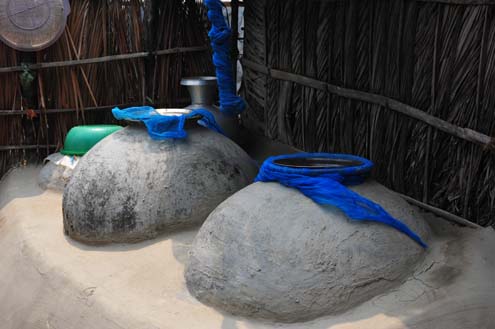 Bangladesh's communities are adapting to climate change by developing new innovations, such as concrete jars, above, to capture rain water during dry periods. Photo by Srabani Roy.

Two-thirds of Bangladesh is located just 5 meters above sea level, and a recent Center for Global Development paper predicts Bangladesh will be the second most at-risk population to sea level rise in 2050 (it ranked third in 2008). Such rises have caused massive flooding of villages, and, in some cases, have eliminated traditional livelihoods. It’s estimated that 60 percent of the country suffers from severe flooding every 4-5 years.

Communities are adapting by taking on new trades, such as growing saline-tolerant reeds to make mats to sell, and cultivating saline water crabs. As the Bay of Bengal’s salty waters continue to encroach on more and more of Bangladesh’s land, it’s critical that community-based adaptation efforts such as these be adopted in all sectors, including agriculture, fisheries, livestock, health, education, and water. The government, donors, and scientists here are showing positive, increasing interest in such initiatives.

Despite such efforts, we in Bangladesh need to strike an equitable balance between aggressively mitigating climate change and taking on new, adaptive measures to survive. According to the daily Prothom Alo, a leading Bangladesh newspaper, Bangladesh produces only 2 percent of global green house gas emissions (that despite being the world’s 8th most populous nation in the world). In spite of this impressive ranking, Bangladesh’s government has recently taken positive steps to combat global climate change. Last year, the country became one of the first to set up a permanent climate change trust fund – without waiting for external support – that aims to protect lives and property from adverse effects of climate change. International donors have also pledged to assist the country in adapting to the negative effects of climate change.

In its first round of support, the government is going to disburse about $3 million from the trust fund to 53 NGOs across Bangladesh to implement climate change adaptation and mitigation initiatives. People are naturally concerned about the skills, human resource capacity, and experience of these organizations, as well as the transparency of the decision-making process.

To succeed, rigorous monitoring and collaboration among the communities, civil society organizations, government, and development partners will be critical. The fund’s impact on the lives of the people needs to be periodically measured. Continuous policy monitoring will need to be in place through citizen and civil society watchdog groups.

The local government and local leadership, such as the Union Parishads (the lowest tier of local government), religious and secular leaders, and the MPs from the vulnerable areas will also need to play an active role in addressing climate change issues to ensure adequate resources are kept up and monitored. In the end, how well and transparent the funds are used will depend on how well the process is governed.

Shameem Siddiqi is The Asia Foundation’s senior program director in Bangladesh. He can be reached at [email protected].