Celebrating a ‘New Year’ of Dialogue for Bangladesh’s Local Businesses

On April 12, Dhaka was vibrating with excitement as residents celebrated the first day of Bengali New Year, or Pahela Baishakh. Lavish, colorful street parties mixed in with bicycles, rickshaws, cars, and motorbikes added to the Bangladesh capital’s incessant traffic jams. This intense city life is a testimony to ceaseless economic activities and to the vivid entrepreneurial spirit shared by so many Bangladeshis across the country. 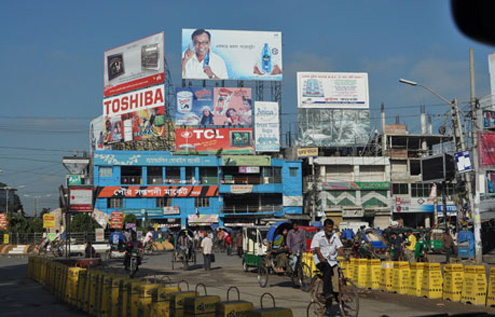 Above, Bangladesh's streets bustle with activity. Photo by Geoffrey Hiller.

In Bangladesh, however, as in many Asian countries, the benefits of economic growth are often concentrated in the main cities and captured by a small percentage of larger enterprises – while economic governance constraints and communication gaps continue to hinder micro, small- and medium-sized businesses and entrepreneurs at the sub-national level from reaching their full potential. Constraints to private sector development include weak sub-national economic governance, burdensome administrative processes, unclear regulations, and lack of information, which have all added to Bangladesh’s slow sub-national economic development. It is common, for example, for a small retailer or a local trader to wait for weeks or months before getting the trade license necessary to operate his or her business. The situation is often worsened by poor networking among stakeholders, and lack of capacity and platforms for members of the business community to engage in constructive partnerships.

In 2009, The Asia Foundation, in partnership with the International Finance Corporation-Bangladesh Investment Climate Fund (IFC-BICF), pioneered a two-year pilot program to help address these constraints and challenges through a series of public-private dialogues (PPDs). Back then, when I joined my colleagues from our office in Bangladesh to introduce the idea in four district headquarters – Barisal, Bogra, Rajshahi, and Sylhet – the aim was to convince our audience that greater dialogue was an effective way to overcome these challenges and address head-on the key obstacles that stood in the way. At that time, many of the participants were skeptical about public officials and business people working together and questioned the commitment of local authorities to make any positive changes in their business environment. Was it mere amusement or slight condescension that I recall detecting behind the courteous smile of the businessman who asked me then, “We have tried working together before, and it didn’t work; why would it work this time?”

The passionate discussions that followed, and the concrete recommendations that emerged from all sides, marked the beginning of an exciting and fruitful, if not always easy, partnership between the Foundation and local governments and businesses owners, and more importantly, between the local governments and the business owners themselves. The realization among key actors that dialogue should be results-oriented, and that in order to get results, the use of credible information is needed, is a worthy achievement.

More than two years, and many dialogues later, we now have concrete results to show. So on the start of  Bengali New Year, despite the city’s stop-and-start traffic,  my colleagues and I were thrilled to join over a hundred representatives from small businesses and of Chambers of Commerce, district mayors, high-level government representatives, Members of Parliament, women from District Women Business Fora, researchers and academics, and different public and private institutions in a national seminar on “Removing Business Barriers through Effective Public Private Dialogue at the Sub-National Level” to share the progress made over the last few years at the district level and challenges ahead for Bangladesh’s micro and small enterprises.

Representatives from the public and private sector explained how district dialogues in Sylhet, for example, lead to the creation of a Women Business Forum (WBF) that improved access to credit for women willing to start or expand their business. Others elaborated on how these fora flourished, with many active groups of women actively involved in their business community. We talked about the simplification of administrative procedures that resulted from the dialogues’ public-private working groups and how these dialogues lead to increased information on business registration and licensing, and encouraged local governments in the four program districts to establish information centers at selected city corporation (municipal) premises. We could even provide some quantitative data about the impact of such dialogues. I watched as participants shared successes, realizing that nothing could be more convincing than seeing representatives of a local business association talking about this new sense of respect they have gained from engaging regularly with local authorities through the fora. No one could have been more appropriate to talk about procedure simplification than the mayor of Sylhet himself, explaining how he responded to the demand of the local private sector by creating a new service delivering business licenses in less than a day when it used to take a few weeks.

And, on that day of April 12, I didn’t see any sign of condescension behind the open and friendly smiles of the participants.