Closing the Governance Gap with Suco Councils in Timor-Leste

Recently on East Asia Forum, Timor-Leste’s President J. Ramos-Horta wrote that the nation’s “desire to join ASEAN is a long-standing one and in the last 10 years we have shown unequivocal determination to join the organisation.” He cited impressive human development achievements that this thriving, small half-island state, still settling from the aftershock of independence just 10 years ago, has made.

Although the incidence of poverty is indeed dropping overall, still 40 percent of the population lives on less than an average of $1.25 a day. At the forefront of current development challenges is how to make state institutions work for the country’s 1.1 million citizens. Or boiling it down: how can the formal state and local communities close the wide gap between themselves?

Recent research conducted by The Asia Foundation on police, law, and justice found that four out of five Timorese are likely to view their community leader as responsible for making and enforcing the rules that govern their lives rather than any state institution, including the courts or parliament. Furthermore, the Foundation’s research on suco (village) governance suggests that few people have contact with the state, especially in areas outside of Dili, the nation’s capital.

After the suco council, the next highest level of elected government is the National Parliament, members of which are elected through party lists based on proportional representation. In a country where 60 percent of the population lives in rural areas, without electricity or affordable telecommunications, dialogue with a member of parliament is not an easy task. For many people it means walking hours on foot paths to get to the dirt feeder roads or paved national roads to attend the rare visit from a member of parliament to a sub-district or district center. Passage to the capital city to meet a member of parliament often requires citizens to traverse mountainous terrain abbreviated by washed out bridges and mud slides caused by severe rain fall. Even on national roads it can take half a day to travel 50 miles. The economic and geographic conditions underlie the wide gap in governance between state and community. This gap is a pressing concern for government policymakers, for the general public, and for those concerned with state accountability for positive development outcomes.

With funding from USAID and support from The Asia Foundation, the suco councils of Baucau formed the first suco association in the country in February this year to help close the governance gap through consolidating suco representation into a district-level body. The level of unity displayed by the suco council leadership was admirable, especially in light of the sometimes fractious party politics in this eastern district of Timor-Leste. Community leaders associated with different parties gathered in the district center and sat through tedious technical meetings to craft their own organizational “statutes” with only limited guidance from the project’s technical staff. They wanted the association to truly be their own.

At the launching of the Baucau association, all suco councils were represented, in addition to the district administrator, representatives of the Ministry of State Administration, and members of the National Parliament. Suco chiefs present repeated the phrase to the 400-strong audience, “Now we have our own organization, we have to make it work.”  Of course, this may be easier said than done, but the optimism was palpable.

While all Timorese live in one of the 442 sucos in one of the country’s 13 districts, the 2009 Law on Community Leaders and Their Election states that “community leaders are not part of the Public Administration and their decisions shall not require the State to follow.”

Though suco councils are legally mandated to perform a wide range of governance functions at varying levels, they aren’t given a budget. The law also mandates suco councils to resolve local disputes and take action to combat domestic violence. Results from The Asia Foundation’s Suco Governance Performance Scale suggest suco councils vary in performance. Some sucos fail in their functional role completely, while others function at below the level the scale defines as satisfactory. However, regardless of their level of performance, the large majority take their mandate seriously and respond surprisingly well to technical guidance. Leaps in suco council performance have been closely associated with the The Asia Foundation’s efforts to orient the suco councils and provide basic training in administration. However, apart from our work, such instruction is rarely provided. 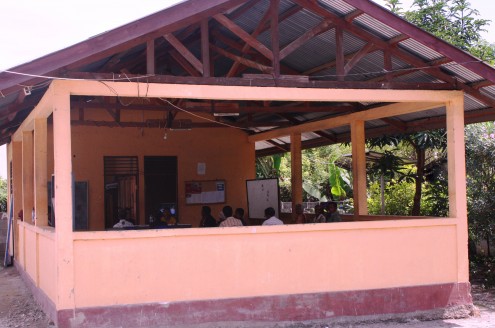 In early 2011, the suco councils of Baucau formed the first suco association in Timor-Leste. Above, the Suco Center in Baucau. Photo by Roselia Pinto.

Despite this mismatch between the law, access to funding, and provision of technical assistance, the Baucau Suco Association has decided to fight the odds. In fact, in addition to regular monthly meetings, it recently launched a reconciliation process between sucos and youth groups, originally formed during the Indonesian era, which practice martial arts and engage in violence, intimidation, and other criminal acts.

In March, the Baucau Suco Association participated in a live radio program. The program achieved the highest listener response rate to date for the Baucau radio station. Listeners from Baucau, Maliana, Ermera, Suai, and Same called in to ask the association to do something about domestic violence, corruption, and the poor quality of infrastructure. Listeners also wanted to know more about the priorities in the state budget.

The launching of the Baucau Suco Association has tapped a chord in the local community. It signals there is pent-up demand for coordination and planning – an urgency to close the governance gap. Lant Pritchett’s research on “Capability Traps” suggests delivering basic goods and services purely through formal state institutions is likely to take years if not decades, even centuries. The Baucau Suco Association has sent the message loud and clear that it’s not willing to wait this long.