The floods of 2010 swept away homes and livelihoods, affecting more than 18 million people and killing more than 1,750 in Pakistan. They also destroyed and contaminated precious water systems integral to the survival of Pakistan’s communities. 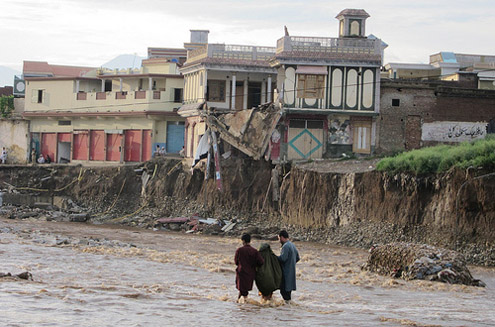 For example, in Union Council Amaze, a remote location in Khyber Pakhtunkhwa Province, 18 water supply systems and the main water pipeline were completely destroyed. In the mountainous North, whole villages lost their sole sources of water. Women, traditionally responsible for meeting the fresh water needs of households, were forced to travel greater distances in search of water.

Beginning last February with 15 organizations in areas severely affected by the floods, a new program began work in earnest supporting women in reclaiming lost land titles, restarting their devastated businesses, and reestablishing destroyed water systems. Implemented by the Aurat Foundation in collaboration with The Asia Foundation, the program is helping a local NGO, the Rural Development Organization (RDO), restore the water supply in Union Council Amaze. Working over the last few months RDO has already restored two of the 18 destroyed water supply schemes, bringing water to 2,000 residents of the village Chak Elahi.

Hussan Pari, an 86-year-old widow with 31 grandchildren, told RDO workers, “God bless those who rehabilitated this water supply line of my home and made the remaining moments of my life comfortable, because I have fallen twice and injured myself while fetching water. Now I have water connection in my house and I am also using the latrine.”

RDO is one of many organizations providing vital assistance to women in difficult circumstances. The new program, called the Gender Equity Program and funded by USAID in Pakistan, will continue to work through local organizations like RDO with specific expertise in women’s empowerment over the next five years. Some of the work will focus on expanding women’s access to justice (through legal aid centers and help lines); other work will combat gender-based violence; while other work will focus on strengthening the capacity of Pakistani organizations working in these fields. Supporting government entities such as the National Commission on the Status of Women, the Ministry of Women’s Development, and the Ministry of Human Rights, is also a goal.

These early interventions on behalf of flood victims were accompanied by a series of studies on gender issues, such as gendered dimensions of disaster management, shortcomings in initiatives on women’s empowerment, and gender-based violence, and the capacity of local organizations to work in women’s issues in Pakistan. Going forward, the work will expand from helping flood victims to working with female lawyers, youth groups, and groups focused on women’s economic opportunities and gender-based violence.

Pakistan’s women face grave gender disparities to start with: low labor force participation, limited access to resources, and high incidences of gender-based violence. According to its latest Labour Force Survey 2009-10, while there have been slight increases in education, 57.7 per cent, compared to 57.4 per cent in 2008-09, literacy rates for women remain among the world’s lowest. Recent politico-legal developments in Pakistan, however, such as the 18th Amendment to the Constitution, do create an opening for strategic interventions in the area of women’s rights and empowerment. For the first time in the history of Pakistan, women have legal protection against sexual harassment in the workplace. The right to access education and information has been made a fundamental constitutional right. The simultaneous growth of media freedom and the spread of new technologies for sharing information create unprecedented opportunities for change.

Amena Raja is senior program officer for the Gender Equity Program at The Asia Foundation in Pakistan. She can be reached at araja@asiafound.org. The views and opinions expressed here are those of the individual author and not those of The Asia Foundation.