Afghan Delegation to U.S. Offers Glimpse into What Underlies Future Peace and Security

Few Americans will ever get the opportunity to meet an Afghan governor, an advisor to President Hamid Karzai, or an Afghan parliamentarian, much less discuss in person the critical issues that underlie efforts toward future peace and security in Afghanistan. Last week, The Asia Foundation, in collaboration with the Hayward-Ghazni Sister City Committee (HGSCC) and the U.S. Embassy/Kabul, facilitated the exchange of a distinguished delegation of 11 Afghans from Ghazni Province to Washington, D.C., and the San Francisco Bay Area to highlight the relationship among Afghanistan, the U.S., and the Bay Area, home to largest Afghan population in the U.S. 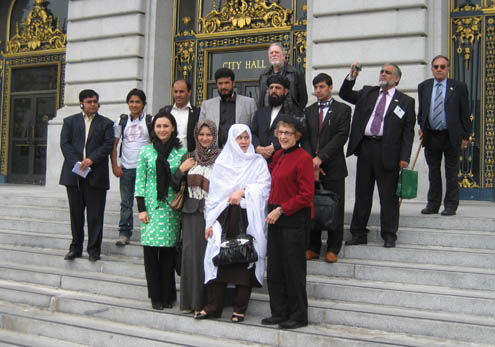 While in the U.S., the delegation discussed ambitious plans for Ghazni's role as a national cultural heritage center.

While in the U.S., the delegation discussed ambitious plans for Ghazni’s role as a national cultural heritage center. Situated in eastern Afghanistan, along the strategic route that links Kabul and Khandahar, Ghazni plays a key role in the historical, economic, agricultural, and political realms of contemporary Afghanistan, and in 2007 was named the “Capital of Islamic Culture” for 2013 by the Islamic Educational, Scientific, and Cultural Organization.

As the delegation met with U.S. government officials, non-profits, city leaders, and universities, they discussed Afghanistan’s poverty, obstacles to effective governance, Afghan perceptions of the U.S., and how education and employment are critical to overall security and sustainable economic development.

For further information regarding their trip, listen to a panel discussion from the June 6 Commonwealth Club of California event with three of the delegation members: Mr. Mohammad Musa Khan Ahmadzai, governor of Ghazni; Mr. Mohammad Yousaf Pashtun, senior advisor to President Karzai on Urban Development and National Construction; and Ms. Shah Gul Rezaie, member of parliament. During this discussion, the panelists stressed the importance of peace and security, employment, and transparent governance as foundational pillars on which Afghanistan’s future should be built, and the role that Ghazni can play in efforts to promote cultural heritage and the overall prosperity of Afghanistan.

Elizabeth Grant, who previously worked in The Asia Foundation’s Kabul office, is currently Senior Program Officer for Afghanistan  in San Francisco, and can be reached at [email protected].  She accompanied the Afghan delegation during their visit to the Bay area last week.