For 10 days in mid-June, my Give2Asia colleague, Gillian Yeoh, and I visited Iwate and Miyagi prefectures in Tohoku, the northeastern area devastated by the earthquake and tsunami that struck Japan on March 11. 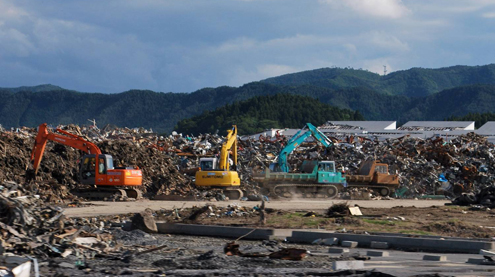 Months after the devastating tsunami, Tohoku officials are struggling to dispose of the enormous amount of waste and debris. Photo by Gillian Yeoh.

We found that Tohoku is still an emergency situation. Just a few days after the tsunami, international media published before-and-after photos of damaged roads that had already been repaired, giving the world the hopeful impression that the devastating physical damage would be quickly and miraculously addressed by Japanese technology. This was not Haiti, after all. But on our visit, three months later, we saw debris fields extending for dozens of miles where coastal communities had stood, fields of wood and concrete rubble, wooden and reinforced concrete buildings precariously perched at unsettling angles, man-made islands of cars, refrigerators, and major pieces of industrial equipment still waiting to be removed. We saw that the Japanese Self-Defense Forces were still searching and finding bodies, and we were told that the continuing search was one reason that heavier equipment is not being used to clear debris more quickly. 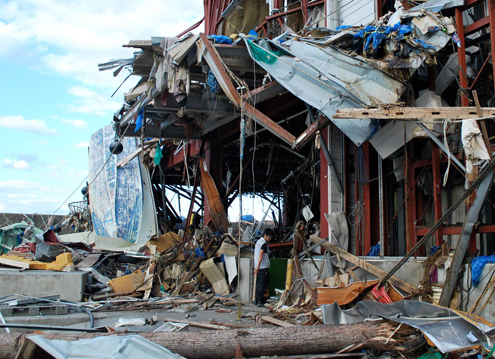 In mid-June, many factories and buildings in Tohoku still remained as the tsunami left them on March 11. Photo by Gillian Yeoh.

But there is another factor at work as well: how to dispose of this enormous amount of waste in an environmentally responsible way. Japan does not have much space for landfill; earlier efforts to dump construction waste at sea have drawn criticism. We saw that rodents, flies, and other disease-bearing pests are a growing problem, especially as the rainy season begins. We also learned that an unknown but substantial number of people are still living on the upper floors of their partially destroyed homes. No one knows whether these homes are structurally sound, but they are likely to be vulnerable to after-shocks or the smaller tremors that are so common in Japan. We also saw that some coastal areas are now underwater or inundated during high tide. No one knows yet whether these communities can survive.

Right after the tsunami, some 400,000 people were living in emergency evacuation shelters, many of them elderly. Those numbers are now declining rapidly, with fewer than 100,000 now officially recognized. Local townships have begun to provide newly built temporary housing. The new units provide privacy and are well-equipped, but because of shortages of available land they are often located in isolated areas. Victims living in temporary housing do not pay rent but are no longer eligible for emergency food and supplies and are expected to pay for utilities and services. Their contracts state that they are expected to leave temporary housing after two years. Because in many cases temporary housing is in isolated areas, it is not clear how some of the residents will earn income or get around to obtain basic services from their doctors and dentists, or even get to food markets.

We were surprised – despite repeated requests – by the lack of detailed demographic data apparently available on victims. Most evacuation centers know, of course, how many people they are serving on a specific day, but we were told that there are no reliable data on those who have since left the centers, or are still living in their cars, in their partially destroyed homes, or in other makeshift arrangements. The priority was on providing immediate emergency assistance to those who were brought in or showed up for help.

Japan has the world’s highest proportion of elderly citizens – people over the age of 65. Anecdotal evidence after the tsunami indicated that as many as 70 percent of the victims in some evacuation centers were at least 65, many much older. Tohoku, the region where the tsunami struck, has long been an economically depressed area, dependent on the economy of Sendai, the nearest large city, coastal fishing, tourism, and the economic and tax spin-offs from the nuclear plant at Fukushima for its income. Younger people have been migrating out for decades in search of jobs and better opportunities for their families, while the elderly have stayed behind. This demographic profile raises profound questions about the future of coastal fishing and farming, as the elderly dominated these industries yet now lack the resources and the spirit to start again.

While there, we also visited current and prospective grantees, local government officials, and the Tokyo offices of several of our U.S. corporate donors. During our visit we were struck by the sense we got from many people we spoke to that the Japanese government was not providing strategic leadership and that local governments, themselves badly hit by the loss of life in the tsunami, had been left to fend for themselves. Among our grantees and potential grantees, there were different patterns of relationships with local government agencies. In some cases, the service providers did not know where in the local government they could find answers to basic questions of coordination and emergency relief; in others, the relationship was productive and mutually supportive. Still, in the absence of a coherent central government plan backed by adequate resources and political will, nonprofit service providers were asking how they could be most effective, how long they should stay in Tohoku, and how they could assist victims’ transition from emergency shelters to temporary housing and to more permanent resettlement.

From the perspective of an international donor, Japan presents some serious challenges in terms of finding experienced nonprofit providers of longer-term reconstruction. For historical and cultural reasons, the Japanese non-profit sector is relatively under-developed. The state has always been an effective and comprehensive provider of public goods and services. Japanese citizens expect their government to play this role. It was not until the Kobe earthquake in 1995 that Japanese society saw the extraordinary potential role of voluntary and nonprofit organizations operating in fields previously dominated by government agencies. Since then, the Japanese nonprofit sector has developed and grown significantly, but it was probably easier to identify experienced and qualified local nonprofit service providers in Aceh after the December 2004 Indian Ocean tsunami than it has been finding their Japanese equivalents today. I was very impressed by the work Give2Asia’s Japanese grantees have been doing in Tohoku, particularly their ability to manage efficiently the services of thousands of short-term volunteers who provide meals in evacuation centers, provide emergency services and supplies to those stranded elsewhere, help in the massive clean-up efforts, and assist in many other ways. Efficient use of diverse and always shifting groups of volunteers, many of whom are available for only 3 to 5 days, is a serious management challenge – our grantees are doing it well. But the scope of this tragedy, heightened by the sustained and specialized needs of a predominantly elderly population, requires much more engagement by specialized professional organizations, including the government itself, particularly in such areas as long-term medical care (especially geriatric care), mental health counseling, legal aid, and re-starting small businesses destroyed on March 11.

Next Steps for Philanthropy

Give2Asia is a philanthropic intermediary. We facilitate donations for this and other emergencies by identifying needs and matching donors to qualified local recipients. We deeply appreciate the trust shown in us by the more than 3,000 donors – individuals, families, and corporations – who have contributed to Give2Asia’s Japan Earthquake and Tsunami Fund and to the many corporations and organizational partners for whom we have facilitated donor-advised grants.

Because it takes time to mobilize resources and to identify appropriate users, our strategy in emergencies is to devote about 10 percent of available funds for immediate relief, another 10 percent for transitional purposes, and to reserve the bulk of what we are able to raise (80 percent) for longer-term recovery and reconstruction. In Tohoku, we have thus far granted about $400,000 for emergency services provided by Japanese service providers, including the Association for Aid and Relief Japan, Second Harvest Japan, Rescue Stock Yard, and Peace Boat Volunteers. We are in deep discussion about their follow-on needs. Based in part on our visit last month, we are currently also speaking with several other nonprofit organizations and professional associations who can provide longer-term services, including mental health outreach; legal aid to victims to establish eligibility for government and insurance compensation, confirmation of land titles, or dealing with developers; recapitalizing or restarting small businesses; and seed funding for a community foundation in Sendai that will raise funds both locally and internationally to sustain its capacity to make awards to local NGOs providing immediate and long-term tsunami-related services. We expect to remain active for several more years in response to this disaster as needs evolve. The world moves on soon after a disaster, but the recovery and rebuilding efforts needed remain long after attention shifts elsewhere.

Dr. Barnett F. Baron is president & CEO of Give2Asia. He can be reached at [email protected]. The views and opinions expressed here are those of the individual author and not those of The Asia Foundation.