Why Are 10 Million Women Missing from Pakistan’s Electoral Rolls?

The latest draft electoral rolls in Pakistan include 48 million Pakistani men and 38 million Pakistani women. Given the roughly equal gender division among the population, this is a clear discrepancy: approximately 10 million Pakistani women are unaccounted for in these figures, and consequently, are not entitled to vote in the upcoming General Elections. The elections are scheduled for February 2013 but will likely be moved up to October 2012, to quell rising public anger at the on-going gas price crisis, a floundering economy, and the “memogate” scandal with the U.S. which continues to occupy the domestic media and discredit the government. 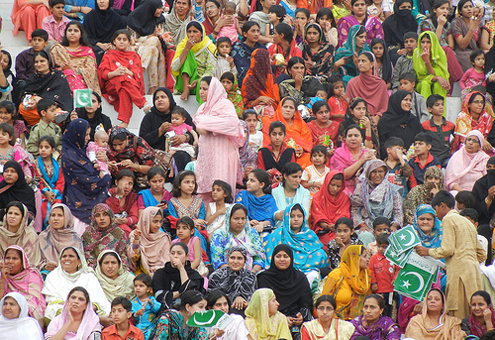 In Pakistan, in order to be able to vote, one must first be registered with the National Database and Registration Authority (NADRA) to get a Computerized National Identity Card (CNIC) which indicates that a person is a legal citizen of Pakistan. Recording citizen data is the responsibility of NADRA, however, voter registration is managed by the Election Commission of Pakistan (ECP), a separate organization with a constitutional mandate to manage all aspects of elections in the country.

ECP and NADRA have been in dialogue to use NADRA data for voter registration to ensure more accurate and authentic electoral rolls. The new electoral rolls prepared by ECP using NADRA data have been posted on public display in order for voters to correct them at more than 50,000 polling sites across Pakistan. This display period is a legal requirement and enables citizens to check and verify if their names appear correctly in electoral rolls or are missing altogether. ECP and NADRA have also collaborated with mobile phone companies to launch the world’s largest SMS campaign to date; allowing voters to text message their CNIC number and receive a text message response with their name and electoral area as it appears on the roll. The SMS service has been used by over 1.6 million Pakistanis to verify their voter registration details.

Despite these efforts, there are a number of factors that may be contributing to low female voter registration. First, given the continuing low registration numbers even after ECP staff have traveled household to household verifying voter registration details and registering those not yet registered, registrars say male household heads answering the door to the registrar may have either not reported the existence of their wives, daughters, or sisters, or flatly refused to have the female members of their household registered. The reasons for this vary, and range from the conviction that women should not be involved in politics to the desire to keep the women in their family off government records and sheltered from government interference. Being registered to vote is not a legal requirement in Pakistan and though the right to vote for all citizens is protected in the Pakistani constitution, no laws are being violated by not registering.

The second issue which may at least in part account for the enormous numbers of women missing from the electoral role, is that women (and all citizens) who have not already registered for the CNIC are not eligible to vote, and registrars from the ECP going door to door have no choice but to refer these citizens back to NADRA and hope that they will take the initiative to register to vote at a later time.

A third factor – likely to be particularly significant in the conflict-ridden regions of FATA and Baluchistan – is that many citizens, both men and women, do not wish to be accounted for by a government they do not feel to be legitimate, and some may feel that their lives could actually be endangered by making it easier for the government to monitor their movements and activities. Many men in these areas may in fact be acting to protect the women in their families by purposely keeping them off the NADRA and ECP records. Further, a significant number of internally displaced people may also have been inadvertently excluded from the electoral roll. Lastly, the practice of employing only male registrars for house calls is also likely to contribute to low female registration as in many areas women at home without their male relatives are unlikely to even open the door to an unfamiliar male visitor.

At this late stage, with perhaps just six months until the national election, it will not be possible to register the majority of the 10 million women still missing from the electoral role. And regardless of their desire to participate following heavy party campaigning and “get out to vote” campaigns expected in the coming months, if these women are not on the roll well in advance of polling day, they will not be able to cast a vote. With only 86 million of Pakistan’s estimated 177 million population registered to vote, and 10 million eligible women unaccounted for, some may question the validity of the election outcome. And questions are certainly likely to be raised as to whether the 2012/13 election process is an improvement on the widely contested process of 2008.

There are, however, things that can be done to increase the number of women currently registered. For one thing, political parties have their own incentive to assist in the registration process, including courting the substantial female vote, and could be encouraged to assist in the registration process – highlighting, of course, that doing so is firmly in their self-interest. Some political parties are already looking to develop an outreach policy for their “women-friendly” policies. To be realistic, as shown in studies of new women voters across Asia, in most instances, previously unregistered women are likely to vote for the party supported by their husbands or fathers. But still, voting makes women part of the political process, and incremental steps forward are still steps forward.