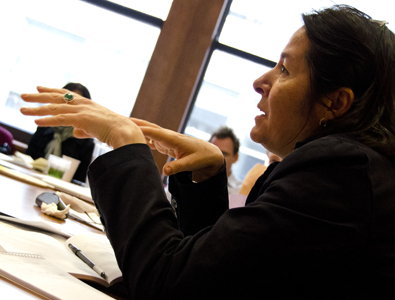 Last week, research fellow for the London-based Overseas Development Institute Pilar Domingo joined development experts for an expert roundtable discussion on law and justice in conflict-affected and fragile regions, hosted by The Asia Foundation. In Asia editor Alma Freeman spoke with Domingo immediately following the event to discuss what the international development community is getting right and wrong in its support of law and justice, ODI’s new focus on women and conflict, the importance of country context specificity, and more.

The most recent World Development Report 2011 highlights the role of justice in breaking cycles of fragility and conflict. What has been the experience of international development organizations in dealing with issues of law and justice?

One of the things that has been missing, and is still missing, is a better understanding of the deeply political role of law and justice in development.

How can international development organizations make sure they have a good understanding of these issues and which particular aspects of law and justice, if any, are most significant to the development context?

For the most part, international development organizations haven’t been good at working with country context specificity, which is something that has relatively recently entered development discussions. Perhaps even more problematic is that many bodies within the international community that are involved in justice sector or rule of law reform are particularly prone to taking a purely technical approach or view, and are thus not sufficiently politically sensitive or politically informed of the task at hand. In many cases, there is a sense that development actors have limited knowledge of the nature of justice sectors in general. While they acknowledge the importance of law and justice for political and economic development, they tend to delegate the tasks of programming and strategic thinking of this field to the technical “experts” – judges, lawyers, police officers. This has led to top-down, overly technical approaches that are not necessarily well grounded in local context needs and realities, or in an assessment of the political aspects of how law and justice institutions feature in society. Thus, development actors (such as governance advisors) come at this field in full acknowledgement that these issues are relevant to development outcomes, but then they delegate the actual practice of policy design and implementation of programming to those experts who have very narrow or formalistic views about these issues.

It is also still the case that donors try and replicate how a justice system works in their country, with little consideration as to whether this is relevant for the actual context that they are applying it to. For example, this has been happening in some of the most problematic conflict areas like Afghanistan where not long ago they were still cutting and pasting whole chunks of legal texts from Northern countries into new Afghan legal documents.

How can donors and development organizations adapt if their principles, norms, and values contradict the realities on the ground that shape the political, social, and cultural characteristics of the local-level justice issues they are trying to support?

I think there has been a huge amount of progress made, which we shouldn’t undervalue in terms of donors and development organizations now having a more sophisticated grasp of their role, and of the need to understand and adapt to context-specific realities. Certainly at the strategic level, the kinds of conversations that we’re having now, such as the acknowledgement of situations of legal pluralism, itself is a huge advance over 10 years ago when mostly you did get blue-print solutions as part of strategic thinking. We have moved on since then, and that’s important progress.

But, progress at the strategic level isn’t translating sufficiently or keeping pace with programming on the ground. I think this is in part due to the organizational issues that donors have themselves with their own internal political economy dynamics. Unless something gives, it’s going to be very difficult to achieve that translation of the more sophisticated strategic thinking into practice because the organizations are just not currently geared up for that. They would need to engage with some fairly fundamental organizational changes in terms of how they operate to achieve this.

In relation to how international actors deal with their normative baggage, there is one important distinction to be made. We now frequently claim that donors should not impose their normative views on aid recipient countries. That should not blind us to the fact that most policy actions carry some normative preference. But in addition, we should also distinguish between issues of normative preference, and the stark realities of the strategic objectives that guide donor countries’ policies. The two are not necessarily the same. For instance, security sector reform in conflict situations may not necessarily be driven out of concern for local citizens but more out of a concern for the struggle against terrorism. Those strategic objectives can also come into play in terms of donor preferences which are driven by the politics of their government’s foreign policy. I don’t know that this gets enough visibility in current development discussions.

ODI is moving toward a particular focus on women and conflict. Why are you choosing to focus on that?

In development work, there is a risk of losing a critical perspective on the need to address issues of structural inequalities, social exclusion, and systemic patterns of discrimination. In some cases, these may even be driving conflict and instability.

But in the concern with achieving peace and stability, longer-term goals of addressing these issues can get lost. For instance, the tradeoffs and dilemmas that often accompany state-building processes – such as peace being privileged over justice – may result in giving more importance to demobilizing or reintegrating armed militia at the expense of the victims. When “do no harm” considerations are not sufficiently put into practice, such trade-offs can lead to situations where the needs and priorities of women and other marginalized groups are left out. This can lead to entrenching patterns of exclusion and discrimination.

This is a challenge for international actors. They need to thus constantly revisit their actions and assess the full impact of their interventions, and where appropriate, they need to have enough flexibility to change the direction of their actions.

The need for caution and ongoing reassessment is also true in relation to current enthusiasm with working with non-state institutions. While it is great that international actors are recognizing the complexities of legal pluralism, and that many services, including justice and security, are provided by non-state actors, there is a need to constantly assess the implications of donor support to these. For instance, in South Sudan, where the international community supported a constitutional process that resulted in formalizing customary justice mechanisms, because that is what prevails on the ground, Sudanese women are voicing a real concern that they risk losing out as a result of this. Uncritically formalizing customary justice may result in freezing discriminatory gender relations that also exist at the community level. That’s a very difficult conversation, but it’s one that needs to be had and brought to the surface.

How do we ensure that research and analytical work serves as a valuable tool to support local reformers and public policy actors?

Effective research is about asking the right questions and critically questioning some of the assumptions that underpin the way that the international community thinks about the role of law and justice in development. Moreover, at the local level, policy-relevant research needs to involve ensuring that research questions are appropriate for the particular needs, contexts, and problems of different communities and different political systems.

Moving away from blueprint solutions to the challenges of improving justice and dispute resolution mechanisms means that research can focus on context specific problems and challenges. We cannot assume that rule of law deficits have the same root causes everywhere. For instance, in some cases where formal justice mechanisms have limited presence and other forms of dispute resolution mechanisms are the norm, it does not pay to focus on formal court issues It may be that the often cited problem of judicial independence at the level of high courts isn’t immediately relevant if you live in a community where dispute resolution is decided through traditional authorities.

In order for policy-relevant research not to reproduce biases in existing power relations in research findings, it is important to engage with a range of local actors and stakeholders that are likely to be affected by policy interventions. This means ensuring that also those groups with limited visibility are given a voice.