As 4.4 million Jakartans went to the polls to vote for the governor of Indonesia’s capital city on July 11, I needed only to step out my front door to experience the pervasive influence money has on politics here. The first campaigner I spoke to on election day told me about the envelopes of cash he had distributed to voters the night before. His concern was not of corrupting the process, but rather that another campaign was paying three times as much. 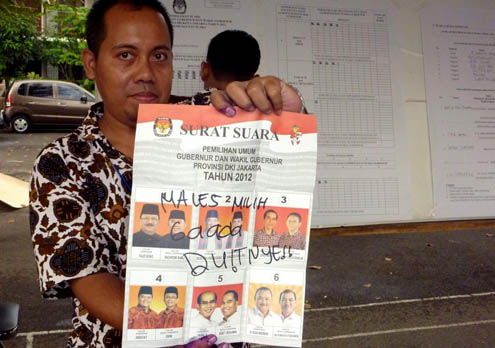 A polling station official holds up a ballot during the count, on which was written: "Can't be bothered voting, didn't get any money!" Residents reported that heads of local neighborhood and community units were offered financial incentives to deliver votes.

Gubernatorial elections in Indonesia’s vast capital are a big deal, involving 7 million registered voters and 15,000 voting booths across the city. The massive administrative operation is not only significant for determining who will hold the capital’s top post for the next five years, but also as a test of Indonesia’s democratic maturity and for assessing political trends in the run-up to important national and legislative elections in 2014.

Allegations of dirty practices surfaced weeks before the polls. Residents reported that heads of local neighborhood and community units (known in Indonesian as RT and RW), the cornerstone of community administration at the local level in Jakarta, were offered financial incentives to deliver votes. Campaign teams are known to exploit gray areas of money politics by paying allowances to “volunteers” – who do little or nothing for the campaign but are expected to vote according to the envelope received. Indonesia Corruption Watch, an Asia Foundation partner, documented 13 different types of money politics during and just prior to the election.

While it is difficult to determine the extent to which such tactics affect voter behavior, observers agree that candidates ran a rather superficial, personality-based race. The most creative campaigning on all sides focused on attributing character – positive and negative – to the prominent mustache of the incumbent, Fauzi Bowo, or “Foke.” Reflecting the diversity of the capital, voters could choose between six diverse pairs of candidates, with each ticket including a candidate for governor and vice governor. Two gubernatorial candidates, Joko Widodo, or “Jokowi,” the popular reformist mayor of Solo, Central Java, and South Sumatra Governor Alex Noerdin, were outsiders. Two other candidate pairs were running as independents – a relatively new electoral phenomenon in Indonesia. Diversity did not extend to gender, however; there was no woman on any ticket.

The results, which were formally announced on July 19, surprised many. Jokowi topped the polls at 42.5 percent, with Foke trailing at 34 percent and Noerdin coming in a very distant fifth.

Jokowi is likeable, and seemingly in his element strolling around local markets to meet the electorate. Furthermore, his campaign was visibly backed by the two individuals topping current polls for the 2014 presidential contest: Prabowo Subianto, from the Great Indonesia Movement Party (Gerindra), and former leader Megawati Sukarnoputri, from the Democratic Party of Struggle (PDI-P). But it is hard to argue that anything other than personality was the decisive factor. Gerindra, in particular, has shallow roots in Jakarta, while Prabowo has deep pockets that have supported extensive branding of personality.

Of relevance to national elections in 2014 is that in Indonesia’s largest city, at least, it would appear that parties cannot rely on the loyalty of a fickle electorate. Golkar Party – currently topping some polls for the 2014 legislative elections and traditionally strong in Jakarta — backed Noerdin, but this ticket received less than 5 percent of the vote. A poll by the Indonesian Survey Institute (LSI) found that only 19 percent of Golkar-identified voters backed Noerdin, while nearly half voted for the incumbent. In a worrying sign for the health of the Golkar political machinery, independent candidate Faisal Basri, whose team had the least funds available for campaigning, finished ahead of the Noerdin ticket. Likewise, while Susilo Bambang Yudhoyono’s Democrat Party (PD) threw its weight behind Foke, only 35 percent of those who voted for PD in 2009 backed the incumbent governor.

Voter registration – a significant concern following allegations that up to 20 percent of the electorate was disenfranchised in 2009 due to inaccurate voter rolls – proved yet again to be the main administrative problem. Twenty thousand names were purged from the voter list just days before the election, but there still remains a large discrepancy between election commission voter registration figures and national identity card data from the Ministry of Home Affairs. Numerous problems were reported on election day, including allegations of buying and selling of fictitious and duplicate voter names. An Asia Foundation program officer documented a voter turning up to cast his ballot only to find that he had apparently already voted. Some 80 percent of polling stations reportedly had problems with voter lists.

On a positive note, the media have been actively reporting on campaigns and the election. Quick counts, conducted through exit polls by private firms and often in association with one or more of the large media, proved to be remarkably accurate. Independent observers have significant documentation on findings. Even the Jakarta Election Supervisory Body, or Panwas, which is often berated for toothless oversight of elections, quickly issued a list of 12 key findings after the election, including admonishment for the lack of facilities in some locations for disabled voters.

Voter turnout was 63 percent. While some analysts quickly decried this in terms of voter apathy and lack of enthusiasm for the candidates, the rate was only fractionally less than for the 2007 Jakarta elections and – for international comparison – exceeds turnout figures from the 2008 U.S. presidential poll.

The runoff election between Jokowi and Foke is scheduled for September 20. Fixing problems with the voters list, taming money politics, and encouraging the candidates to speak more directly and consistently to the voters’ primary concerns should be top priorities between now and then.