By By Nina Merchant-Vega and Kate Bollinger

On September 8-9, the heads of 21 Asia-Pacific economies will gather in Vladivostok, Russia, for the 2012 Asia-Pacific Economic Cooperation (APEC) Economic Leaders’ Meeting to adopt a final declaration outlining prospects for the development of the region. Among the topics that will be integrated into the discussion is how women can more fully participate in APEC economies to foster innovative growth. 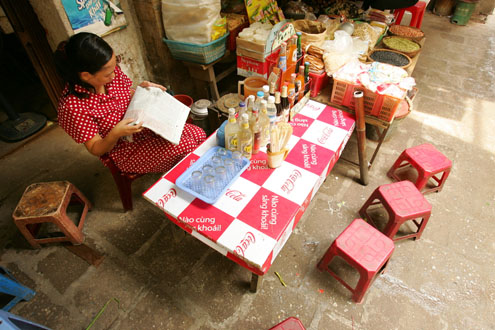 Women in the Asia-Pacific region still face many obstacles in owning businesses, including onerous start-up costs and regulations, time restrictions due to household and family responsibilities, and cultural attitudes and workplace policies that are often unfriendly. Photo by Karl Grobl.

Earlier this year, APEC held the second Women and the Economy Forum in St. Petersburg, Russia, and released a follow-up statement urging government officials and business leaders to “recognize the crucial role that women play in innovative economic development and business expansion through promotion of policies and actions which further women’s economic participation across the APEC region.”

U.S. Secretary of State Hillary Clinton, who attended the very first Women and Economy Forum held last year in San Francisco, echoed this in her address at this year’s forum, with a focus on the role that women-owned micro, small and medium-sized businesses in the region play to spur innovative growth. “Women now represent 40 percent of the global labor force, 43 percent of the global agricultural workforce, and more than half of the world’s university students,” noted Clinton. There are nearly 6 million formal, women-owned small businesses in East Asia. And in economies like Indonesia, Malaysia, Thailand, and Vietnam, women-owned businesses are increasing and growing at a fast rate. “So it’s just logical: Limiting women’s economic potential is for every country like leaving money on the table. It doesn’t make sense, especially when we are still struggling to grow our way out of the economic crisis,” she said.

However, Clinton stressed that women in the region still face many obstacles in establishing and growing their businesses, emphasizing that not only laws, but also some cultural norms across the region can “undermine women’s economic participation and women’s dignity and rights while reinforcing the damaging idea that women should be treated differently because of [their] gender.”

Indeed, the evidence confirms that women entrepreneurs across Asia face a myriad of challenges. The World Bank’s 2010 Economic Opportunities for Women in East Asia and Pacific Region notes that while laws in the region show parity for men and women on paper, institutions often fail to implement these laws in a gender-equal manner. Onerous start-up costs and regulations affect both men and women, but are often more burdensome for women who generally have less starting capital and more time restrictions due to household and family responsibilities. In addition, cultural attitudes and workplace policies are often unfriendly to women, placing limitations on family leave and flexible work schedules.

To better understand and address these issues, The Asia Foundation is working in partnership with APEC on a project to investigate barriers to growth and access to trade among women-led small and medium businesses in Malaysia, the Philippines, Thailand, and Indonesia. As outlined by the Foundation’s women’s empowerment program director, Carol Yost, who attended this year’s APEC Women and the Economy Forum, the project uses both quantitative surveys and qualitative case studies to examine the economic, policy, and cultural barriers to women’s entrepreneurship and trade across these four countries. The research will inform policy locally, nationally, and regionally to enable each country to more effectively address these constraints. Results will be disseminated at the next Women and the Economy Forum in Bali in 2013. Research findings will also be disseminated directly to women in business through national workshops in Thailand, Malaysia, and the Philippines as well as a regional workshop in Malaysia. The workshops will bring together women in business in each of these countries as well as Indonesia to promote regional networks of women in business, skills development, and discussion of business women’s experiences in relation to research findings.

Closing the gender gap between women’s and men’s economic participation has important effects for people and economies across Asia. Countries with greater gender economic equality are more competitive and more robust. The UN estimates that the Asia-Pacific economy would earn $89 billion every year if women were able to achieve their full economic potential. Further, countries who invest in women see important returns beyond economic benefits. Economically empowering women builds better educated, healthier families, stronger communities, and decreased national poverty. Continued efforts to better understand and address the barriers that limit women’s economic potential is vital for the growth of the Asia-Pacific region.

Nina Merchant-Vega is The Asia Foundation’s associate director for the Economic Reform and Development program and Kate Bollinger is a program officer for the Foundation’s Women’s Empowerment Program. They can be reached at [email protected] and [email protected], respectively. The views and opinions expressed here are those of the individual authors and not those of The Asia Foundation.