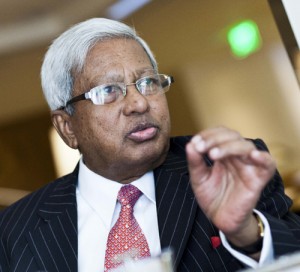 From September 9-19, The Asia Foundation hosts development pioneer Sir Fazle Hasan Abed, founder of BRAC, the largest nongovernmental development organization in the world. Based in Bangladesh, and dedicated to alleviating poverty by empowering the poor to bring about change in their own lives, Sir Fazle is The Asia Foundation’s current Chang-Lin Tien Distinguished Visiting Fellow.

The Asia Foundation has arranged an intensive set of meetings and speaking engagements for Sir Fazle during his U.S. visit to the San Francisco Bay Area and Washington, D.C. On Monday night, Sir Fazle spoke at a World Affairs Council event (watch video), and yesterday, In Asia blog editor Alma Freeman sat down with him for an exclusive, face-to-face interview on Bangladesh’s remarkable transformation over the last 40 years, his most rewarding (and challenging) projects, and more. Below is an excerpt from the conversation; stay tuned for next week’s blog where we’ll feature the full interview.