Once Out of Reach, University Now Possible for Girls in Rural Vietnam

Last month, local headlines in Vietnam announced the government’s much-welcomed decision to earmark an additional $119 million (VND2.5 trillion) to assist with loans to low-income university students in the upcoming academic year. This is certainly good news, because despite Vietnam’s strong economic growth and impressive achievements in many development areas, including literacy, serious challenges and inequalities in its higher education system remain. 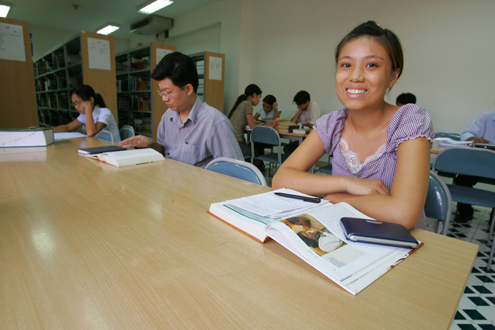 Cities like Hanoi are on average considerably higher than the rest of the country, making attending university there prohibitive to most rural students. Photo/Karl Grobl

In Vietnam, as in much of developing Asia, rural and lower-income people have far less access to higher education than richer, urban residents. Recent figures speak to this disparity: in 2010, an average of 6.4 percent of students across Vietnam over the age of 15 had obtained a college/university certificate. But, this figure falls to only 4.5 percent in the rural Northeast and even further to 3.4 percent in the Mekong Delta, one of the country’s poorest regions. As in many other countries across Asia, cultural practices and traditions in Vietnam dictate that girls are more likely than boys to be kept out of school, as rural families that cannot afford to educate all of their children will typically educate their sons before their daughters.

Another challenge is that prices in the larger cities like Hanoi are on average considerably higher than the rest of the country, making attending university there prohibitive to most rural students. Hanoi’s consumer price index increased 2.47 percent between August and September of this year, leaving consumer prices 5.4 percent higher than at the end of 2011. In addition, Hanoi is one of the two largest educational centers in Vietnam, home to over 50 of the country’s 419 universities and many colleges and vocational schools. With so many of the leading universities, Hanoi attracts large numbers of students from other provinces. Only a small number of these students are able to get places in school dormitories, which are limited in number. Finding a place to live and arranging their personal expenses becomes one of their main tasks outside studying. 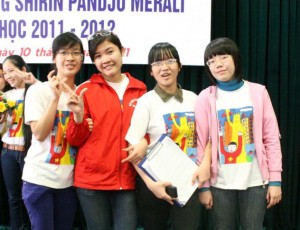 Thanks to a scholarship from the Shirin Pandju Merali Foundation, Nguyen Thi Thuong (second from left) now attends university in Hanoi.

However, some girls, such as Ms. Nguyen Thi Thuong from Thai Binh Province in northern Vietnam, are able to beat the odds, thanks to the Shirin Pandju Merali Foundation, which partnered with The Asia Foundation in 2011 to start a scholarship program for rural, low-income women to attend science and technology universities. She and 99 other girls from rural Vietnam are now earning university degrees – something their families would otherwise struggle to continue their education at university level. For Thuong, who is now in her second year at the Hanoi University of Technology, and many other young people like her from provinces beyond Hanoi and Ho Chi Minh City, getting to university is even more meaningful because it means a future not associated with hard work in frost and sun in the field. Greater access to professional fields such as science and technology is particularly important for Vietnam’s economic trajectory: to compete globally and within ASEAN, increasing job opportunities beyond agriculture to these sectors will be critical. Vietnam dropped 10 places to 75 on the World Economic Forum’s Global Competitive Index this year, swapping places with the Philippines, which rose 10 slots to 65.

I recently spoke with Thuong, and she shared that she along with many of her peers have struggled to get used to a new life in Hanoi, despite their enthusiasm to be attending university. They say that English, which is used in some of their science courses, presents a particular difficulty, since most were used to studying English only through reading books and rote memorization.

Despite these challenges before graduation, Thuong and her peers expressed their gratitude for the support from the Shirin Pandju Merali Foundation, and are determined to succeed in their new environment. For Vietnam, their success will be critical to the country’s global competitiveness and the next generation of leaders.