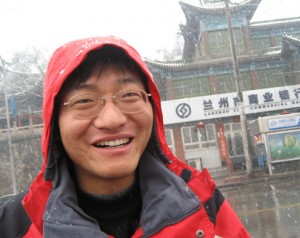 TIME Magazine “Hero of the Environment” and prominent Chinese grassroots leader, Zhao Zhong, recently spoke at The Asia Foundation’s headquarters in San Francisco on working with governments and corporations to increase accountability in order to protect China’s rivers. Zhao Zhong is the Pacific Environment’s new China program coordinator based in Beijing. While he was in San Francisco, In Asia editor Alma Freeman sat down with him to discuss the role of environmental NGOs (ENGOs) in China, the challenges he faced starting the first ENGO in Gansu province (called Green Camel Bell), and China’s balance between growth and the environment.

You went to school for electrical engineering, and moved to Gansu province to work at the Academy of Sciences. What motivated you to start your ENGO, Green Camel Bell?

During my student life I became a volunteer for an environment group called Green Anhui. I was a real outdoor enthusiast and loved spending time outdoors, going on hikes. But I also saw a lot of problems when I went outdoors: like forests being cut down and bad pollution. I felt a push to do something for the environment. I gained a lot of knowledge about environmental issues as a volunteer. When I moved to Gansu in 2004, I saw that the province had many serious environmental issues, and I also saw there were no ENGOs at all. I met some students and green groups who really wanted to work together to do something about these issues, but they had no platform to communicate to the public or to start activities. That’s why I started Green Camel Bell, which is named for the traditional bells worn by camels in caravans along Silk Road.

What was it like being the first ENGO in Gansu?

In the beginning, the public did not understand what a NGO does or that we were trying to help them improve their environment. When we visited communities, they would ask: “why are you here?” In the cities, it’s much easier; people understand the purpose of ENGOs. But if you go into a rural area, they are skeptical and have a hard time believing that you are there to help without profiting. For example, in one of our projects in Niujiahe village in central Gansu, where it is very arid with very few river resources, we worked for years to build the trust of the communities, just sending in student volunteers to try and raise awareness and communicate that we were there to help improve their environment and their ability to earn a living as a result. After a few years, we built trust with the village leader, and with his assistance, our work became easier. But, it’s hard to start from scratch. Over the last four years, we’ve held countless meetings with community members and the government to introduce the work of civil society and NGOs. It’s a very long-term process in China.

It has also taken time to build our relationship with the Chinese government’s Environmental Protection Agency. Before 2008, they wouldn’t provide us with data related to the environment, but after China passed the environmental disclosure act in 2008, it became much easier to obtain information, but not without persistence: the first time we went to them, they said that they didn’t have the information ready. But after some time, they learned more about Green Camel Bell and now when we apply for information they give it to us. They also invite us to attend their conferences, and want to stay in communication with us and even ask for our suggestions.

What are the biggest challenges to grassroots environmental work China?

The most challenging issue for Green Camel Bell and other grassroots organizations here is a lack of human capacity and a lack of well-trained people who have strong professional skills and knowledge in the environment. Most are student volunteers who, when they graduate, go on to work for the government or a high-paying company. Very few choose NGO work as their career path.

Another issue is that most ENGOs are still in the beginning stages and engaged in general activities, rather than focusing on one specialty as you’d find in the West. If a student is really interested in wildlife conservation, for example, there aren’t many organizations that specialize professionally in that field. There still aren’t enough choices for graduates – in Gansu, with a population of 30 million, there are no more than 10 ENGOs.

But, things are definitely much better than they were even 10 years ago. I’ve spoken with some of my elders who said that when they graduated from university, they really wanted to work in the environment field, but there just wasn’t a space to get involved. As a graduate student now, if you want to do something directly you have choices, you can work with a variety of local, international, or regional NGOs, or you can be a member of environment clubs.

What do you see as the relationship between development and the environment in China?

The conflict still exists between the environment and development in China. Of course, it’s hard to ask the government to just protect the environment, without focusing on GDP growth. It’s difficult to achieve the balance. My hope is that we find the benefit between both areas. If the government hears a different voice from communities, that will have an impact. That’s where NGOs can play a valuable role.

Sustainable community development in rural areas is very important, and the central and provincial governments are very important in this. They have implemented a lot of huge projects, for example, eco-cities and return farmland to forests or grassland programs. But sometimes they lack detailed solutions. For example, if you ask a villager to give up pesticides on his crops and just give him money, that won’t solve the problem. Without monitoring, he will continue to use the pesticides because he believes that doing so will bring bigger harvests and increased income. This is again where NGOs can help – we can go to the villagers and work directly with the farmers, discuss with them their challenges, and help them make smart decisions that involve the entire community to make it a real sustainable village. We can then share these successes and duplicate them in other places.

What role does China play globally in relation to the environment?

I think China is in the middle – still learning from western countries about the best environmental solutions. On the other end, China still influences other developing countries in Africa, Southeast Asia, and South America. I think that China wants to take greater responsibilities around global environmental issues. But, unfortunately, many Chinese companies overseas still don’t have enough rules and regulations, and when they operate in other countries, there are at times negative effects to the environments there. NGOs can play a role in encouraging companies to be more environmentally friendly overseas as well – as it’s not just good for their image, but also good for the reputation of China.