A buzz of excitement filled the room, with camera lights flashing and fingers fervently typing on laptops and smartphones. Students, young professionals, and seasoned journalists from around the Asia-Pacific gathered eagerly for the start of BlogFest Asia 2012 in Siem Reap, Cambodia, The four-day affair earlier this month brought together the region’s best and brightest bloggers and technologists to exchange ideas on more effective blogging and the digital landscape. 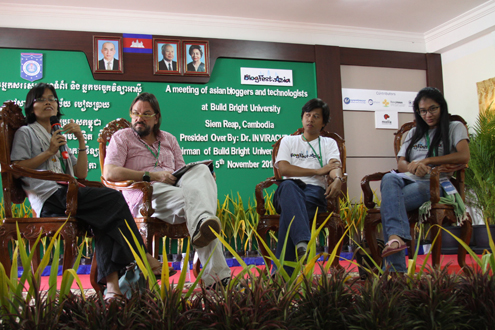 In the spirit of the ASEAN region’s goal of economic integration by 2015, BlogFest was created to build a community of social media enthusiasts that fostered the exchange of ideas and culture. Approximately 200 people from Malaysia, Bangladesh, Burma, Singapore, Thailand, Taiwan, Vietnam, Indonesia, Hong Kong, the Philippines, Australia, the United States, and Cambodia attended this third BlogFest, after the first in Hong Kong in 2009 and Penang, Malaysia in 2010.

Topics ranged from the practical (commercializing blogging, cyber security, using blogs as a resume, blogging with multimedia) to the more theoretical (defining internet freedom and responsibilities, using the internet to empower and promote civic engagement, defending freedom of information and expression). However, the most poignant discussions took place on the topic of ensuring freedom of expression, press, and information – a critical and urgent issue for the region.

In September, three prominent bloggers in Vietnam were handed prison sentences, charged with propaganda against the one-party communist state. In Malaysia, a blogger was arrested in early July for allegedly insulting one of the country’s royalty, an offense punishable by up to seven years in prison. Bloggers and activists in the Philippines have been battling a new internet law called the Cybercrime Prevention Act of 2012, which took effect in October 2012 (the Supreme Court issued a temporary restraining order on the law after strong protest). The law penalizes computer-related crimes, including identity theft, online fraud, child pornography, and cyber terrorism, but critics are most concerned about its overreaching provisions related to libel. A person found guilty of libel on the internet could be imprisoned for up to 12 years. According to the new law, a libelous comment on blogs or any other social media platform like Twitter is considered a more serious crime than printed libel.

In comparison, Cambodia’s current state of internet freedom is relatively unrestricted: its cyber law is still in draft form, although outright criticism of the government remains scarce and self-censorship widespread. Blogger Sopheap Chak, one of the conference organizers and project coordinator at the Cambodian Center for Human Rights, said in an interview with the Cambodian Daily: “[There are] not many bloggers writing about social issues or politics…This is probably [due to] self-censorship because you can see all of the cases of harassment of journalists offline.”

Cambodia ranks 117 out of 179 in the Press Freedom Index (tied with Zimbabwe and Venezuela) and currently lacks a Freedom of Information law. Meanwhile, the looming cyber law raises concerns among bloggers and human rights groups wary that the proposed legislation will limit freedom of expression. The government assures that the cyber law is not meant to punish critical voices, but rather to prevent crime and protect data. However, in the context of a shrinking space for civil society and an increase in human rights violations in Cambodia, some are beginning to express scepticism.

According to Freedom House, the government is increasingly concerned with the internet’s potential to serve as a platform for the opposition. In February 2011, numerous media outlets reported on the shutdown of several opposition websites, including KI-Media, a popular news aggregator and commentary blog. The government denied any involvement.

However, the situation is definitely not all doom and gloom in Cambodia. For instance, the government could have easily barred an event like BlogFest from happening; instead, the Cambodian Minister of Information, Khieu Kanharith, attended and presented awards on the final day of the conference. While the state wields heavy influence over traditional media outlets, new and social media are, as of now, largely ungoverned. The ICT infrastructure and growing internet penetration (3.1% in 2011) provide immense potential for overcoming challenges.

Increasingly, Cambodians are getting excited about harnessing technology for development, as evidenced by events like BarCamp Phnom Penh, an open technology conference, TEDxPhnom Penh, and the Asia BlogFest. Technologists, bloggers, and others hope these events can be incubators of innovative solutions to pressing development challenges and a source of inspiration for Cambodians interested in participating in social media.

In one of the conference’s final workshop sessions, “Cybercrime Law in the Philippines,” speaker Tonyo Cruz shared with his Cambodian counterparts applicable lessons from the Filipino context. It was encouraging to hear him remind participants that despite different nationalities, that as netizens of the internet, they are all in this together. He added, “Only in an atmosphere of freedom could we make full use of social media and technology for good [governance] and progress.” As I watched participants brainstorm ideas to form networks across the region via Twitter and Facebook, the excitement and immense potential the digital landscape has to empower and unite voices for positive social change was undeniable.

The Asia Foundation was one of several sponsors who supported BlogFest Asia 2012.