On November 25, Nepal’s government released a report on gender-based violence that revealed some disturbing findings:  nearly half of the women respondents have experienced violence in their lifetime. 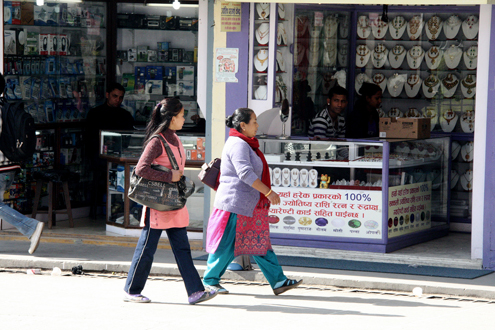 According to a new report, close to half of women reported experiencing violence in their lifetime, and over a quarter had experienced violence in the past 12 months. Photo/flickr user Juha_Uitto

Launched by the Gender Empowerment and Coordination Unit (GECU) in the Office of the Prime Minister and Council of Ministers (OPMCM) with support from The Asia Foundation and the UK’s Department for International Development, the study is comprised of a cross-sectional survey of 900 women at the household level, randomly selected across six districts in Nepal as well as focus group discussions with men in each of the six districts and with national-level stakeholders. In addition to filling a gap in information as to the type, prevalence, and knowledge of legislation and regulatory resources to address gender-based violence (GBV) in Nepal, it serves as a reference guide for the GECU to better combat GBV and builds upon the preliminary mapping of GBV supported by the Foundation in 2010. Below are some key findings from the survey:

Despite these findings, the report revealed a more positive perception of the government’s response to gender-based violence issues in recent years amongst national level-stakeholders. The establishment and activities of the GECU were viewed as particularly important, and have raised the profile of the government’s activism surrounding its GBV policies. The research results show a consistent pattern of high policy priority and robust policy formulation, but weak implementation, resulting in relatively little knowledge of and use of services.

Many decision-makers at the national level, and some at district level, are aware of the specific contents of new and existing laws that can be used to protect women against violence and punish offenders. The Domestic Violence Law, anti-trafficking law, the law recognizing rape within marriage, and laws to protect women from sexual harassment in the workplace were all identified as providing Nepali women with a legal environment that, in theory at least, protects them from violence, stigma, discrimination, and exploitation. In practice, however, it was also recognized by a number of interviewees that implementation and public knowledge of these laws have been less than ideal.

Yet the findings also show that much remains to be done with regard to implementation and district and regional-level outreach. The GECU has been working with 13 government ministries, the police, and NGO stakeholders to enhance district and regional-level stakeholder understanding as to the laws and government action plan on GBV and the roles and responsibilities under those laws. The GECU has increased its interaction with the Ministry of Home Affairs and police in order to improve police response and sensitivity to cases of GBV, as well as with the Ministry of Health and Population to increase the capacity of the newly formed one-stop crisis centers for victims of GBV. Although the GECU is a policy-making and oversight body, it has the unique ability to convene government ministries as well other authorities to account for their progress. This research will further help the GECU target all government of Nepal initiatives to combat GBV to where they are most needed.