One of the world’s most prominent experts in Afghan art, Mr. Omara Khan Masoudi, director of the National Museum of Afghanistan in Kabul, was in San Francisco recently on a two-week exchange at the Asian Art Museum as an Asia Foundation Brayton Wilbur, Jr. Fellow in Asian Art. During his visit, In Asia editor Alma Freeman sat down with him for a one-on-one interview. 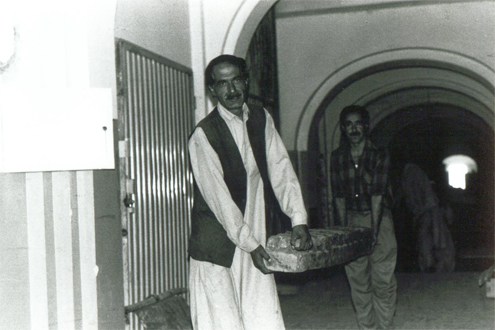 Mr. Masoudi (front) was one of the few who personally safeguarded the crown jewels of Afghanistan (Bactrian gold) in vaults under the presidential palace in 1988 as the Soviet occupation gave way to civil war.

Afghanistan has been called the crossroads of Asia. How does the art reflect this?

Located on the ancient Silk Road in Central Asia, Afghanistan is inhabited by a population of diverse cultures. Throughout its history, people of different ethnicities and religions settled in the region, including Hindus, Muslims, Jews, Buddhists, and Zoroastrians, bringing with them the rich diversity reflected in the paintings, sculptures, textiles, coins, and everyday objects now displayed in the National Museum and provincial museums in Afghanistan.

The artists of that time were influenced by other cultures – they mixed. We are proud of this. In fact, we can also see from the artifacts that in past centuries, we did not have fighting among ethnic groups, which unfortunately, we now have. But, we can learn something from the past by looking at the artifacts – where you can see that people of different religious and ethnic backgrounds could live in peace. Each culture has positive things from the past – we have to transfer these positive things to the present.

You were one of the few who personally safeguarded the crown jewels of Afghanistan (Bactrian gold) in vaults under the presidential palace in 1988 as the Soviet occupation gave way to civil war. Can you describe what this experience was like?

At that time, I remember that people thought the Communist party would transfer power very soon to the Mujahadeen. Everyone thought this. But this also served as a signal to me and the museum staff. We predicted that when this political change came, there would also be a political gap. So, as the situation worsened, we asked ourselves: what do we do to safeguard the museum artifacts?  We needed to transfer the unique pieces from the museum to the center of the city and store them in different places, so that if something happens in one area, the second, third, or fourth area will be safe. One year later, in 1989, we shifted these pieces. After three or four years, authority was transferred to the Mujahadeen and after a couple of months, civil war started. Fighting erupted in the streets, especially in the western part of the city where the museum is located, so we could no longer visit the museum. The museum was looted and took fire.

When the artifacts that were looted from the museum surfaced on the black market, many journalists asked us about the Bactrian Treasure, as none of them appeared on the black market. Of course we knew, but we could not reveal the information to anyone; it could be dangerous. We kept the location of the pieces secret. During the middle of the civil war, while it wasn’t safe to visit what remained of the museum, we wondered if the other pieces were still safe. The president granted our request to go and check the humidity levels of the storage areas. We went, and saw all signatures and boxes all in good condition as we’d left them. But, we still kept it secret. In 1998, under the Taliban, we went once again to check the humidity levels, and everything was still ok. After 2003, Karzai said there is no reason to keep silent. We are not heroes – we did our jobs.

Afghanistan today is perhaps more recognizable for war than for its deep culture of art and expression. What role can art play to change this image?

The situation is not stable in Afghanistan, and usually the media exaggerates this. Unfortunately, this makes people think Afghanistan is the land of explosions, the Taliban, and fighting. In fact, this is a country that has a fine civilization and fine arts. By having exhibitions from other countries at our museum, and having our own art a part of exhibitions around the world, we are building closer relations and exposing ourselves to one another’s cultures. The “Hidden Treasures” exhibit (which traveled from London, across Europe, to Canada, and the U.S. and to San Francisco’s Asian Art Museum), introduced the other face of Afghanistan to people. It’s possible to change people’s minds directly through this exhibition, which has had nearly two million visitors since 2008.

Can you talk about plans for the National Museum in Kabul as well as provincial museums?

Afghanistan has an ancient civilization, and in each part of our country you can find ancient sites. But the economic situation in Afghanistan is not good – people cannot easily travel from the North to the South, East to West, because their incomes are too low. Security is a problem, but in some parts, it’s not as serious. But traveling to learn about their culture is not urgent for most Afghans. That’s why we must develop museums in each province so that the young people can easily access and visit the museum, to learn about their past, their art, their culture. The Ministry has a clear plan to improve the museums in the provinces.

Our national museum is 92 years old, and we’ve recently started important new initiatives, including a computerized database according to international standards. But, we also need a new building to preserve the artifacts properly – we must have humidity control, proper lighting, fire protection, and security. Our present building doesn’t have anything close to this. Before I had visited other museums in other countries, I didn’t know how much we were missing here. But, these systems are extremely important to preserve the arts.

During my Fellowship in San Francisco, I met with experts from different departments of the Asian Art Museum, including the registration, public relations, marketing, and restoration departments. When I go back, I hope to increase my staff capacity in these areas, and develop new branches – especially in marketing. We don’t have a PR department, but I’m going to request from my ministry to add these branches to the museum.

The Brayton Wilbur, Jr. Memorial Fellowship in Asian Art is administered by The Asia Foundation’s Asian American Exchange unit. Read more about Mr. Masoudi’s fellowship. The views and opinions expressed here are those of the individual author and not those of The Asia Foundation.