By By Sagar Prasai and Mandakini Devasher Surie

More than 75 percent of Asia-Pacific countries lack water security, according to a new report released last week by the Asian Development Bank. Compared to other regions, South Asia is a hot spot where inequity of access to water is the highest. The region supports more than 21 percent of the world’s population, but has access to just over 8 percent of global water resources. As rapid population growth and urbanization increase demand, water is increasingly a scarce and precious resource in South Asia. 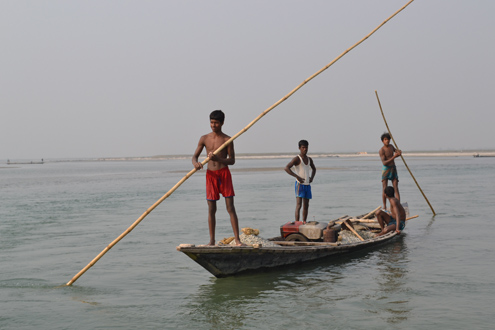 Even as the complex environmental consequences of climate change, deteriorating river ecology, and growing urbanization continue to unfold new challenges for the region, South Asia’s water woes could be significantly mitigated through improved water governance of its major transboundary rivers: the Indus, Ganges, and Brahmaputra, which straddle international boundaries and support the lives of an estimated 700 million people. Effective regional cooperation in managing these and other transboundary rivers in the region will only be achieved when countries work together.

The Asia Foundation recently concluded a study on the political economy of the Teesta River Basin, in partnership with civil society organizations in India and Bangladesh. Based on field work on either side of the India and Bangladesh border, the study examined the social, political and economic factors influencing basin governance, and mapped key stakeholders, their incentives, relative stakes, and capacity to influence water governance decisions in the basin. The Teesta River originates in the northeastern Indian state of Sikkim and flows through West Bengal before entering Bangladesh. It has been a source of dispute for decades as both countries have significant populations that depend on the Teesta’s waters for food, energy, and livelihoods. For example, the Teesta flood plain covers nearly 14 percent of the total cropped area of Bangladesh, providing livelihood opportunities directly to approximately 7.3 percent of the population, or 9.15 million people, in five districts of Rangpur. The Teesta River Basin is a fascinating microcosm of the complexity that surrounds the politics of transboundary water governance in South Asia.

Through the study, we discovered that a host of individuals and groups have found little voice in the formal negotiation process about how the Teesta’s waters are shared between India and Bangladesh. These include fishermen and environmental activists interested in maintaining the ecological balance of the river; developers and financial institutions looking to construct mega dams and hydropower projects in the Indian state of Sikkim; farmers in West Bengal and Bangladesh who are putting pressure on their governments to build barrages and irrigation canals as the river hits the plains; “hydrocrats” (hydrologists in the national capitals of both countries) who disagree with their foreign affairs colleagues on the meaning of “national interest;” and hundreds of thousands of farmers on both sides of the border who are marginalized, and who suffer up to eight months of drought and floods year after year.

With such a broad range of stakeholders with an interest in the river and its management, arriving at a widely acceptable solution is a difficult task. One of the study’s key takeaways is that workable solutions in transboundary water governance will not materialize until the following three features of South Asian water governance policies change:

While these changes will not happen overnight, the report identifies the following strategies to help promote the process of reform:

Working with an unbundled state. The state is made up multiple individuals, groups, and agencies that compete for resources and power. They carry different perspectives on necessary policy responses and are able to provide checks and balances on the system. For example, the courts, the parliament, and political parties all have varying degrees of influence over formal policy processes. It is necessary for civil society and other stakeholders to identify and engage with a diverse set of actors within the state to drive reform efforts rather than to wait for state hydrocracies to evolve.

Dialogue first, negotiations second. Negotiations on transboundary water are state-controlled, single-track processes that have failed to understand the diversity of claims on water and the potential for benefit sharing of transboundary rivers. This has kept broadly agreeable solutions on transboundary water from emerging. An expanded, multi-track dialogue process can actually change the agenda of negotiation and help to make it broader in terms of the potential for benefit sharing. On the Teesta alone, negotiations have been going on for over four decades. Unless approached differently, an alternate result is not likely to materialize in the future.

Alignment of stakeholder interests. Our analysis suggests there are shared interests between different sets of stakeholders in the Teesta River Basin. For instance, civil society activists in Sikkim are seeking to protect the ecological health of the river by limiting hydropower and dam development on the Teesta to ensure a basic minimum flow in the river. Their interest matches those of boatmen and fishermen in Rangpur, Bangladesh, where availability of water in the dry season is affecting transit and fishing activities. Such alignments can be fostered and used to build grassroots coalitions around shared objectives.

Transboundary CSO coalitions. Civil society organizations can serve as important conduits for fostering dialogue and linking grassroots issues to the negotiation process. In particular, CSOs can work outside the confines of foreign policy, work across borders to engage with a range of stakeholders, and support informal dialogue processes to support formal negotiations. The dialogue platforms provided by transboundary CSO coalitions can help pave the way for more effective formal negotiations between states.

Open access to information. Government monopoly over data and information in the Teesta River Basin has prevented civil society and other non-state actors from effectively engaging and intervening in the river’s management. By bringing a greater volume of information in the public domain, through support for programs on the Right to Information (RTI) and other transparency enhancing activism, state control over data can gradually be eased, opening up new spaces for civil society engagement and participation.

The United Nations has declared 2013 as the International Year for Cooperation on Water, recognizing that “water is a shared resource and its management needs to take into account a wide variety of conflicting interests.” As water scarcity continues to confront South Asia’s populations and economies, understanding the issues, challenges, and opportunities that this study presents is a good place to start, and over time, will be critical to improving transboundary water governance in  the region.