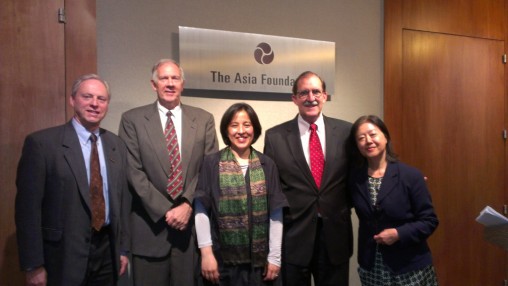 San Francisco, April 19, 2013 — On April 16, The Asia Foundation hosted Chong-ae Lee, Asia Foundation-sponsored Nieman Fellow at Harvard University and senior reporter at Seoul Broadcasting Systems (SBS), at its San Francisco headquarters for a conversation on “News Media in Seoul Today and Investigative Journalism.” Speaking to an audience of Asia Foundation staff, journalists and scholars, Ms. Lee shared insight on news media in Seoul, with particular focus on investigative journalism, SBS’ creative efforts to raise voter turnout in the recent presidential election, and her experience as a Nieman Fellow.

A veteran investigative journalist, Ms. Lee has been with SBS, one of Korea’s most popular television stations, since 1995. She served as the first female investigative reporter for the program “News Pursuit,” and has received numerous awards, including Reporter of the Year from the Journalist Association of Korea.  Ms. Lee has also participated in a workshop at the DART Center for Trauma and Journalism as a DART Asia Fellow. Ms. Lee is the first reporter from SBS to be selected as a Nieman Fellow. She is the 26th Korean journalist chosen since The Asia Foundation began nominating Korean candidates in 1963. The Nieman Foundation has hosted more than 1,300 journalists from 92 countries since its founding at Harvard in 1938. The fellowship enables accomplished journalists to spend the academic year at Harvard to pursue a specific project while taking courses. The Nieman Fellows from Korea are supported by The Asia Foundation, the Sungkok Journalism Foundation, and YBM Inc.