The Philippines Rocks for a Fully Abled Nation

Eastwood City in Metro Manila came alive on May 7 as top bands and artists came together, in front of some 200 persons with disabilities (PWDs) and more than a thousand fans for a free concert to encourage and inspire the audience to go out and vote in the upcoming midterm elections on May 13 to cast votes for 18,053 positions (from Senator on down to municipal councilor) up for election nationwide. 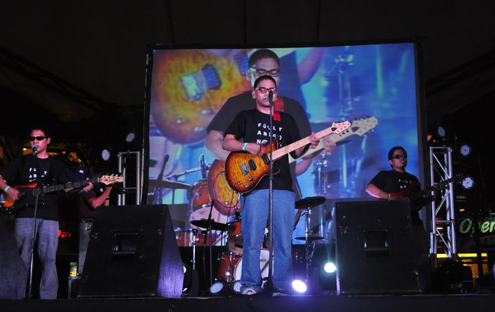 PWD band Long Time No See performs at Rock for a Fully Abled Nation to help encourage PWDs to go out and vote on May 13.

Dubbed “Rock for a Fully Abled Nation,” DAKILA, in partnership with Locked Down Productions, Megaworld, Eastwood City, and Jam 88.3 organized the concert. The concert is one of the projects and activities under the Disability-Inclusive Elections program popularly known as Fully Abled Nation or FAN, implemented by The Asia Foundation as part of Australian Aid’s program on Disability-Inclusive Development.

In the Philippines, there is no precise and official number of PWDs and PWD voters that can be relied on by government agencies and even disability peoples organizations (DPOs). Most sources use estimates from World Report on Disability conducted by the World Health Organization (WHO) and World Bank that says 15 percent of the country’s population are PWDs. With the 2010 population pegged at 94,349,600, PWDs are estimated to be around 14 million.

Based on the “People’s Evaluation of the May 2010 Philippine Automated Elections of Social Weather Stations (SWS)” February to June 2010 Surveys, 46 percent of the 435 projected households with PWD members had members that were not able to vote because of their disability, mobility constraints, and lack of reasonable accommodation for PWD voters. An additional 409,000 projected households have PWD members who are not registered voters.

These sobering findings became the jump-off points where The Asia Foundation based its disability-inclusive program.

Over the last two years, The Asia Foundation, with support from The Australian Agency for International Development (AusAID), has been in the forefront of driving better participation in the upcoming elections through the Fully Abled Nation (FAN) initiative, a disability-inclusive elections program that increases participation of PWDs in the May 2013 elections and other democratic processes. After an intensive voter registration and education campaign, over 400,000 PWDs are now eligible to vote.

While this is certainly good progress, the urgency now – just five days away from elections – is to make sure that PWDs actually go to vote on Election Day. With every band sharing their personal experiences with PWDs, the concert amplified the call for greater awareness of PWDs’ right to suffrage, and encouraged everyone to be part of the collective voices of artists, advocates, and volunteers to ensure a disability-inclusive May 2013 elections. Video clips and photos gathered over the past two years of implementing the Fully Abled Nation initiative were also shown.

Just like everyone, people with disabilities need a little push to fulfill their right and responsibility to be able to cast their vote. The government, civil society sector, and organizations for the disabled have been working hand-in-hand to make sure that the upcoming elections would be sensitive to the needs of the vulnerable sector including PWDs. Let’s hope this plays out on May 13, and that their voices are heard by casting their vote.