By Doka Wilson and Tirza Theunissen

On June 9, the Zorig Foundation held its annual Young Women Leaders Event, which brought together 115 young women recipients of the Shirin Pandju Merali scholarship program. The recipients had a chance to meet one another and to hear the experiences of three successful women who rose to the top in spite of barriers, and who are now positioned to play an influential role in shaping Mongolia’s development. 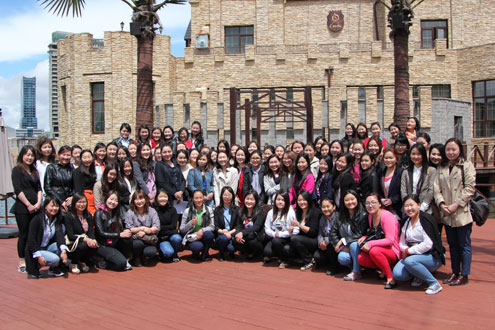 Recipients of the Shirin Pandju Merali scholarship program come together for the Young Women Leaders event on June 9 in Ulaanbaatar.

The Shirin Pandju Merali scholarship program was established by the late Mr. Pandju Merali, a successful businessman, entrepreneur, and philanthropist, to honor his wife, Shirin, and provide young women in the developing world access to higher education. Since 2010, The Asia Foundation has partnered with the Shirin Pandju Merali Foundation to provide young women from low-income backgrounds with scholarships to pursue university degrees in hard and social sciences and technology – fields where women are severely underrepresented, and has grown to support 476 young women in five countries: Cambodia, Laos, Mongolia, Malaysia, and Vietnam. In Mongolia, the program has enabled these women, coming predominantly from the countryside, to study at two prestigious universities: the Mongolian University of Science and Technology (MUST) and the National University of Mongolia (NUM).

Ms. Aldarsaikhan Tuvshinbat, who graduated in March 2012 from the Massachusetts Institute of Technology (MIT) with a bachelor’s degree in architecture, spoke about perseverance. Originally from Aldarkhaan Soum in Zavkhan aimag (province) in the countryside, while in high school Aldarsaikhan Tuvshinbat learned about an exchange program and took the English test for the program, but failed. However, after taking English classes on her own and completing high school, she pursued her dream to study abroad and went to the U.S. to take part in an exchange program at her own expense. She ended up at a high school in Kentucky and transferred subsequently to a community college in California from where she applied to MIT. She said that when she was applying to MIT, her classmates refused to believe that she, an international student from Mongolia, would ever have a chance of being admitted. How very surprised they were when she was accepted. She is now a master’s student in architecture at Harvard, and will continue studying urban planning at Harvard University as a Fulbright Fellow. 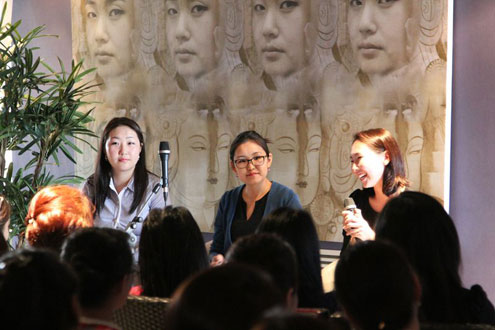 Ms. Nomingerel Khuyag, originally from the capital, Ulaanbaatar, and a graduate of the NUM School of Law, with a LLM  degree in Comparative Constitutional Law from Central European University (CEU), Budapest, Hungary, spoke passionately about her dream of becoming a lawyer. Since 2007, she has been a key member of the research team for current Justice Minister Mr. Kh.Temuujin, conducting research on rule of law reform and constitutional democracy in Mongolia. She actively participated in drafting and advocating passage in 2012 of the Law on the Regulation of Conflict of Interest in Public Service, and the Law on the Status of Lawyers. Recently she was appointed as a director at the National Legal Institute and is actively involved in the minister’s legal reform of the criminal code, and chairs the working group on the implementation of the Law on Legal Status of Lawyers. She told the scholars how having the opportunity to study abroad has been instrumental for her personal development. As a student at the CEU, she said she was strongly encouraged to think for herself and form her own opinions, whereas she had previously been taught to limit herself to what her text books or professors would say.

Ms. Oyuntuya Batmunkh, a graduate of the NUM’s School of Chemistry and Chemical Engineering, was born in Ulaanbaatar and always thought she would become a doctor. However, she later developed a specific interest in environmental issues, in particular environmental chemistry. After she finished the NUM, she worked as a chemistry teacher at the Mongolian Medical University for two years. While she was teaching, she decided to take on another job as an explorer of uranium extraction technology at a Mongolian company operating in the countryside to gain practical experience. Her family initially opposed her decision, telling her it was too dangerous and discouraged her from getting involved in this sector traditionally dominated by men. Despite her family’s disapproval, she persevered and shared with the Merali scholars how this choice to broaden her knowledge and diversify her experience has been very useful for her in her current position as a general chemist with one of the nation’s top environmental consulting firms and a cutting-edge environmental lab.

The personal experiences of these three women sparked many questions among the Merali scholars, from what had helped them to succeed in university and after graduation and how they managed stress, to how they dealt with being one of the few women working in their professional environment and what recommendations they had for the girls to achieve their dreams. The young women leaders advised the girls to give full attention to their studies, never to let anyone make them feel that they are not good enough, and to plan and actively participate in activities related to their areas of study.

Mongolian women and girls have fought hard to advance in education, political participation, and economic independence. The personal stories of the three women leaders served as concrete examples of how they were able to defy traditional stereotypes, and encouraged the Merali scholars to use the scholarship as an opportunity to be part of the next generation of women leaders contributing to Mongolia’s future development. As The Asia Foundation’s country representative in Mongolia, Meloney Lindberg, pointed out at the conference, “The Merali scholars are already serving as role models for other girls and women in the communities they come from.”

For nearly 60 years, The Asia Foundation has been committed to improving access to education for women and girls across Asia. Since the Shirin Pandju Merali Scholarship program began in 2010, it has grown to support 476 young women in five countries: Cambodia, Laos, Mongolia, Malaysia, and Vietnam.