This month, Transparency International released its latest Global Corruption Barometer. Surveying over 114,000 respondents across more than 100 countries, Transparency International reports that more than half of those surveyed believe that corruption has worsened in their country in the last two years, since the last Global Corruption Barometer was released in 2010/2011. Moreover, the majority (54%) of people surveyed also believe that their government is ineffective at fighting corruption. This is an increase over the 47 percent in 2010/2011 who said they lacked confidence in their government’s effectiveness in combating corruption. 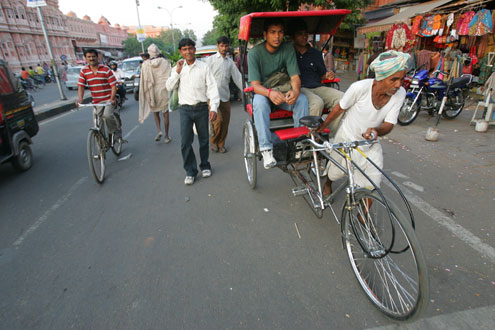 In India, 54 percent of respondents reported having paid a bribe in the last year, double the global average of 27 percent who had reported paying a bribe. Photo/Karl Grobl

Transparency International’s report also reveals a global public that has a nuanced understanding of what corruption means. It’s clear from the respondents’ answers that the concept of corruption encompasses not just the payment of bribes in exchange for public services, but also the disproportionate favoring of political elites over the powerless, whether through their ability to buy influence over public decisions, to divert public funds toward their own interests, or simply to “get away with” things that the powerless cannot. Altogether, these various dimensions of corruption combine to shape the public mindset and erode their trust in democratic and legal processes and in public institutions, such as political parties, the judiciary, and the police.

In Cambodia and India, an astonishing 57 and 54 percent, respectively, reported having paid a bribe in the last year, double the global average of 27 percent who had reported paying a bribe. When bribes were isolated by public services, such as law enforcement, the judiciary, or land services, those rates go up even more in many countries. For example, in Afghanistan, Cambodia, and Pakistan, bribery rates for land services (e.g., registering or transferring land titles) ranged from 39 to 75 percent. In Indonesia, bribery rates of the police were the highest at 75 percent.

Respondents were also asked about their perceptions of other, arguably even more corrosive forms of corruption. Nearly two out of every three people surveyed thought that personal contacts were important or very important to getting things done in the public sector. Such thinking is not limited to developing countries; even in countries like the United Kingdom, United States, and Belgium, more than 60 percent of respondents answered that their country was either entirely or to a large extent run by a powerful minority looking out for themselves. Across the 107 countries surveyed, political parties and the police were viewed as the most corrupt public institutions. This was true in countries as diverse as India and South Korea, Nepal and Thailand, and Pakistan and Indonesia.

Across different countries, constituencies are using different approaches to combat corruption. In 2011, tens of thousands gathered in cities across India to peacefully protest against government corruption and to support the Jan Lokpal Bill (which has still not been passed). Activists and civil society organizations have also leveraged an increasingly connected Indian population to press for reform through popular social media outlets such as Facebook. Western-based organizations like Amnesty International and the American Civil Liberties Union (ACLU) help individuals voice their concerns through online petitions. Similar efforts are taking place through local and international organizations in developing Asia, like Transparency International’s Asia-Pacific branches or the Hong Kong-based Asian Human Rights Commission. These organizations are working to combat corruption through investigative reporting, information dissemination, communications campaigns, as well as online petitions.

In asking people about their role in stopping corruption, Transparency International found that 69 percent of respondents would be willing to report an incident of corruption. Of the other 31 percent, many stated a fear of reprisal for their reason for not being willing to report corruption. As the report states, “It is clear that there is a need to establish safe and effective mechanisms to facilitate and empower people to report incidences of corruption.”

Promisingly, many such mechanisms are already being used, some to great success, like India’s ipaidabribe.com, whose founder, T.R. Raghunandan, I interviewed for this blog in 2011. Bribespot is another promising crowd sourcing tool that allows anyone to anonymously report and track incidents of bribery through their website and smartphone apps. With hope, effort, and determination, the will of committed citizens can be amplified by the use of both traditional actions (such as peaceful protests) and these kinds of innovative applications, to lessen the impact of corruption on their societies.

Katherine Loh is a senior program officer for The Asia Foundation’s Economic Development Programs in San Francisco. She can be reached at [email protected]. The views and opinions expressed here are those of the individual author and not those of The Asia Foundation.