Conversation with Singapore’s Ambassador to the U.S., Ashok Kumar Mirpuri 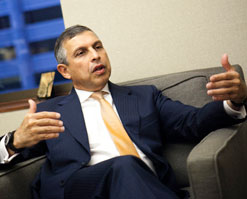 The Asia Foundation hosted Singapore’s Ambassador to the U.S., Ashok Kumar Mirpuri, on July 9 at its San Francisco headquarters for a dinner discussion on Singapore’s role as a strategic partner in the Pacific Rim. Julian Rhoads, executive assistant to Foundation President David D. Arnold, met with Ambassador Mirpuri for an in-depth discussion on U.S.-Singapore relations, engagement with ASEAN, the “haze” crisis, and Singapore’s business environment.

You are coming up on your one year anniversary of your posting in Washington D.C. What have been your most memorable moments, and what has surprised you?

I came in mid-2012 in the midst of the election season. It was eye-opening to watch the election process, because everyone around the world follows the U.S. presidential election. It is so critical the global leadership role the U.S. plays, and to be here watching it – I attended both of the party conventions – was fascinating. I had the opportunity to speak to people and to see that process go through and in many ways shape the thinking of what came next. What has also been really fascinating in the past year or two was this strong engagement that the Obama administration has undertaken with regard to Asia. A number of Asian leaders have come through Washington – the Japanese prime minister, the Sultan of Brunei, Singapore’s prime minister, the South Korean president, and the Myanmar president – and there was the summit recently with the Chinese president in California. This engagement with Asia is moving forward, and this is very important for the region, because the U.S. has such an important role to play in the Asia Pacific. The administration is also working with ASEAN, for instance through the East Asia Summit and the ASEAN Regional Forum.

What role does U.S. engagement with ASEAN play and how do you see the role of trade in this?

U.S. engagement with ASEAN has actually helped to make ASEAN more focused in many ways. Now, the fact that the U.S. president attends the East Asia Summit every year means that ASEAN has to consider deliverables in working with the U.S. The U.S. has for example come out with initiatives on economic and energy cooperation, which ASEAN then has to respond to as a group. More broadly, as the world turns toward the Asia Pacific given the region’s economic growth, growing middle class and rising expectations, to have the U.S. actively engaged has been a real plus in terms of keeping us focused on the evolving regional architecture.

Take trade for example. Singapore is essentially a trading nation and we view trade as very important for the region and the U.S. The WTO process was initially our priority but as it was not moving fast enough, Singapore began negotiating bilateral FTAs with a number of countries including the U.S. Then there were regional FTAs that involve the whole of ASEAN as a group, as well as between ASEAN and key partners. ASEAN is now working to create the Regional Comprehensive Economic Partnership (RCEP) with our FTA partners, but there is also the Trans-Pacific Partnership (TPP), and eventually we want to see all these come together as a Free Trade Area of the Asia Pacific. The whole idea is really to make it easier for businesses to invest in the region and for goods and services to move around more easily. That really is the goal of the whole region setting up this architecture of FTAs. It isn’t always simple, but it is an important part of where we are trying to move toward as a region.

Earlier this month the ASEAN Regional Forum was held in Brunei. What is your perspective on the recent ARF meeting, what are some challenges and opportunities as the 2015 goal of an ASEAN economic community approaches?

I think we had a very successful set of ASEAN and ARF meetings in terms of moving ASEAN forward. The ASEAN agenda gets bigger and more complicated every year as we deal not only with issues pertinent to ASEAN as a group, but to our partners as well. To be able to meet and speak on some of these issues and advance them forward is quite critical, such as bringing ASEAN closer together as an economic entity and a political entity, which is what we have been trying to achieve with the regular ASEAN meetings. The ASEAN Regional Forum speaks on broad regional security issues, and we’re fortunate to be in a region that is relatively stable. There are nonetheless areas that need to be discussed further and moved forward, and the ARF offers an opportunity to speak on some of these issues e.g. territorial disputes that are taking place, how they can be resolved peacefully, and how can we do this with international partners.

The target of creating the ASEAN Economic Community by 2015 is really interesting and important because it will help to establish ASEAN as a major economic entity. We want to be able to have open skies where planes can fly freely; we want to have better connectivity among the ASEAN countries. We are very disparate in many ways if you look at the 10 countries of ASEAN: We have very different economic systems, very different economic standards of living. You have archipelagic states like the Philippines and Indonesia, small countries like Brunei and Singapore, and landlocked states like Laos. How you bring these countries together will always pose big challenges, and part of the reason the economic community is being created is to deal with those challenges.

The “haze” over Singapore has been in the news recently, which is an annual issue following burning forests in Indonesia. That certainly has economic impacts on Singapore and the region.

Initially when the haze first struck, there was confusion about what should be done and what could be done. The Indonesian president then spoke out and put a very strong emphasis on tackling the fires, and the people of Singapore and our leaders welcomed that. Now I understand that many of the fires have started to die down, and fortunately the direction of the prevailing winds has changed as well, so these have helped Singapore quite a bit. But this is really something the region needs to work on more closely. There is an ASEAN agreement on trans-boundary haze pollution. Indonesia says they are now moving toward ratifying it. The foreign ministers of Indonesia, Malaysia, and Singapore met between the recent ASEAN meetings in Brunei and agreed to establish a trilateral cooperation process to tackle the haze problem more effectively. The haze impacts not just Malaysia and Singapore, but Indonesia itself, and how they deal with it will be quite critical for the region.

Singapore has a department in charge of setting up Singaporean businesses in other countries, including the United States. Can you talk about the economic component and the business component of US-Singaporean relations?

As countries in Asia move up into developed nation status and become donor nations themselves, how does Singapore see itself in that context as one of the most developed nations in the world, and is it giving that technical assistance?

Our approach is what we call training and technical assistance. We have benefitted from technical assistance other countries have given to us, and have become a successful economy. We want to share some of this experience with new emerging economies as well. We have a special department in the foreign ministry called the Technical Cooperation Directorate, and they do many of these things bilaterally with our neighboring countries. They’ve also started partnering with some developed countries like the United States, and also with organizations like The Asia Foundation, the IMF, and the World Bank, to jointly share some of our experience that we have in particular fields with developing countries. For example, Singapore has one of the best airports and ports in the world, so we are in a position to advise on airport and port management. Right now, Singapore is working with the U.S. on a program to help developing countries in the region improve their buildings and make them more environmentally sustainable – “green buildings,” something Singapore has prioritized given our limited natural resources. As a highly urbanized city-state with 5 million people living in a very small space, sustainable urban solutions have been essential.