This year’s annual meetings of the Asia-Pacific Economic Cooperation’s (APEC) in Bali provided an opportunity to collaborate with experts and practitioners on findings from The Asia Foundation’s recently published research, “Access to Trade and Growth of Women’s SMEs in APEC Developing Economies: Evaluating Business Environments in Malaysia, Philippines, Thailand, and Indonesia.” The Foundation organized a panel discussion during APEC’s Small and Medium Enterprises (SME) Working Group Meetings. The broad goal of the meetings was to help build an “internationalized” business environment as set out in the Bogor Goals in 1994 that committed APEC to achieve free and open trade and investment by 2010 for industrialized economies and by 2020 for developing economies. 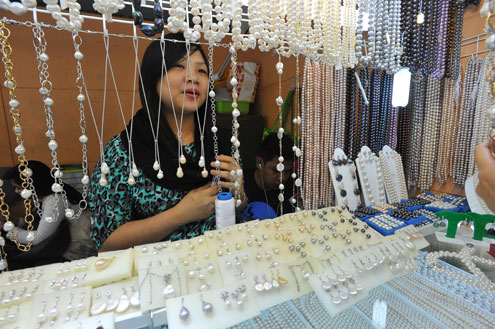 Panelists pointed out that women are often torn between being a family care giver and an entrepreneur, which has the effect of turning their business into a “hobby home business.”

The panel discussion, co-hosted by The Asia Foundation and Chevron Corporation, featured four businesswomen, one from each economy surveyed, who discussed issues highlighted in the Foundation’s research report, including finance, social factors, and business-related technologies. In addition, The Asia Foundation’s senior director of Women’s Empowerment Programs, Carol Yost, and the Foundation’s chief economist, Véronique Salze-Lozac’h, who were both part of the Department of State delegation to the APEC meetings, presented the research at parallel APEC meetings.

One common question posed to the presenters was why it is necessary to put a particular spotlight on women entrepreneurs when many of the barriers women-owned SMEs face are the same as those faced by men-owned SMEs. Salze-Lozac’h responded that, while women and men-owned firms may face similar constraints overall, women face several specific initial and on-going barriers that are not encountered by men-owned firms. As a result, policies specifically targeted toward women entrepreneurs, said Yost, are not privileging women over men, but are aimed at leveling the playing field so that both men and women in business can thrive, benefiting individual economies and the region as a whole.

Other issues highlighted during the panel discussion, as in other APEC events, included the need to increase accessibility to finance for women entrepreneurs through a streamlined local application process, boost awareness and use of technology, address problems with employee hiring and training, and to reform discriminatory policies and social factors impacting women.

Access to finance is a key issue for women entrepreneurs. Andal Krishnan, the panelist from Malaysia, said that in her country, women are less aware of options related to loan and grant opportunities. She attributed this to several factors including limited access to networks which provide important business information, and lack of sufficient knowledge to manage financial paperwork required by banks. To address such constraints, Imelda Maidir, the panelist from Indonesia, said that, rather than subsidized interest rates, specific steps could be taken to address financial barriers women entrepreneurs face. Easier access to bank credit and other sources of finance, including for start-up capital, is a necessary step. In addition, financial institutions should incorporate different instruments for different categories of SMEs, recognizing the diversity of SMEs which populate each economy.

Further, innovative measures are underway to increase opportunities for businesswomen. For example, Krishnan’s first stop after the APEC meetings was a meeting with the women’s business association in which she is involved, the National Association for Women Entrepreneurs in Malaysia, related to the launch of a new crowd-funding mechanism there.

Employee hiring and training was another constraint highlighted in the report and, in fact, in every country surveyed it was noted to be the most problematic aspect of running a business for women owners. Pajaree Kewcharoenwong, a panelist from Thailand, said that employee retention is one of the most common topics of discussion in her business association. She said many SMEs in Thailand face rapid employee turnover due to the country’s low unemployment rate. It is not uncommon for an employee to disappear soon after being hired, which turns the funds used to train them into a loss for the business owner. Frequent changes to government regulations related to the hiring of immigrants, who constitute a large portion of the Thai workforce, are an added complication for entrepreneurs who have a hard time finding accurate and up-to-date information on relevant regulations.

Panelists and discussants also raised the need to boost the use of technology in their businesses. Krishnan emphasized that not only would the utilization of business-related technologies help women reach new markets and become more competitive, it would also allow women entrepreneurs to be able to work from home when their traditional childcare responsibilities require them to stay home. As a result, when these women go back to the workplace, they would be able to demand higher salaries from their employers.

Krishnan and other panelists pointed out that women are often torn between being a family care giver and an entrepreneur, which has the effect of turning their business into “a hobby home business.” In fact, The Asia Foundation’s survey findings noted that 58 percent of female firm owners in Indonesia, Malaysia, the Philippines, and Thailand reported having primary responsibility for the children while just six percent of male firm owners did.

Other needs highlighted by panelists throughout discussions included the importance of formalizing businesses, the need for product diversification, and the need for consideration of women in government procurement. Linda Luz Guerrero, a panelist with the Social Weather Stations in the Philippines, put it perfectly when she said, “Women who go into business mean business.”

Kate Bollinger is a program officer for The Asia Foundation’s Women’s Empowerment Program in Washington, D.C. she can be reached at [email protected]. The views and opinions expressed here are those of the individual author and not those of The Asia Foundation.