In the beautifully restored third century B.C. citadel of the ancient western Afghan city of Herat, scholars and diplomats from Afghanistan’s neighbors and international partners spent the first weekend in October at a security conference exploring prospects for the country to emerge as a stable and independent state after NATO military forces leave in 2014. 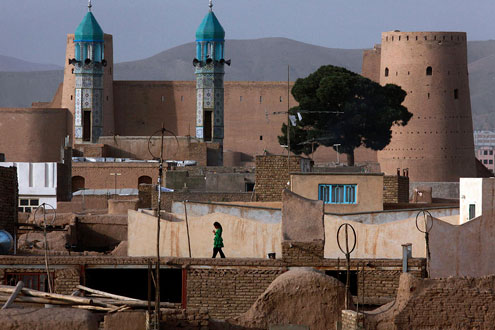 A girl walks in front of the citadel in the Afghan city of Herat, the site of a recent security conference. Flickr user/UN Photo

The conference, which I attended along with more than 130 other participants representing 30 countries and organizations, was filled with more questions than answers about what awaits Afghanistan.

Who will be chosen to be the nation’s new leader in the April 5 election to replace President Hamid Karzai? Will the elections meet international standards? Will the Taliban be integrated as a legitimate political force or remain spoilers or worse in Afghanistan’s political future? Will Afghanistan maintain the new freedoms for the media and in the status of women or slip backward once international attention is reduced?

Afghans are engaged in passionate debate about the identity issues that will determine whether their nation will stay on a modernizing course. New legislation to ban violence against women has triggered a backlash among Islamic experts and traditionalists. Newly empowered women are anguishing about the possible loss of their recent gains.

A conference speaker who said the Taliban era of the late 1990s brought law and order at home and regional peace provoked intense discussion about the terrible abuses of those years. There is free-floating anxiety about the Taliban’s enduring capacity to intimidate and undermine the new politics of the country.

But the main focus of the two-day conference was the rebalancing of Afghanistan’s relations in its region. Dubbed by the Turks as the “heart of Asia,” Afghanistan actually bridges multiple regions: the Persian Gulf, Central Asia and South Asia. Afghanistan’s goal is to optimize its location as a transit route, trading partner and developing economy without being subservient to any outside powers.

Read the full version of this article, which was originally published on CNN’s blog, Global Public Square.