As civil society in Asia has made significant progress over the past several decades, the need for a forum that brings together the major players to focus on key challenges to inclusive and participatory democracy has become increasingly important. The Asia Democracy Network (ADN) – launched in April 2013 at the 7th Ministerial Conference of the Community of Democracies (CoD) in Ulaanbaatar, Mongolia – just held its Inaugural Assembly from October 21-22 in Seoul, Korea. The event, organized jointly by the Korea Democracy Foundation (KDF) and The Asia Foundation, took place in conjunction with the Seoul Democracy Forum under the theme of “Challenges of Inclusive Democratization to Civil Society in Asia: Linking Democracy to Peace and Development.” 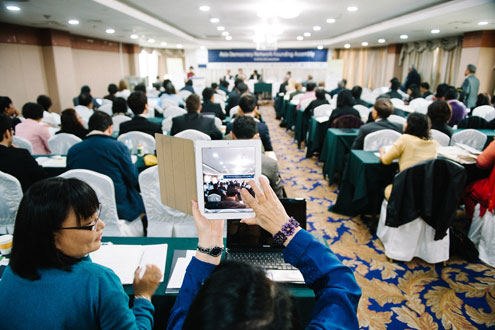 Although there have been attempts at organizing civil society organizations in Asia into a broader network, the Asia Democracy Network is positioned to be more active and have a more enduring impact. The network is made up of over 100 NGOs and civil society organizations from 26 countries around the region working in fields ranging from media freedom to human rights. The network aims to promote and consolidate democracy and democratic governance, making use of international cooperation and solidarity in the fields of information sharing, capacity building, and research and advocacy. ADN will also engage actively with the CoD, the UN Human Rights Council, ASEAN, and SAARC in its efforts to promote democracy in Asia.

“The different CSOs and networks in Asia usually work separately on sectoral or thematic concerns – human rights, media, women and gender equality, as well as elections,” said Melinda de Jesus, executive director of the Center for Media Freedom and Responsibility in the Philippines and a member of the ADN International Organizing Committee. “A democracy network should help us to see these separate values as parts of the whole and to come to a clearer understanding of what democracy should involve for the system to work for the people.” 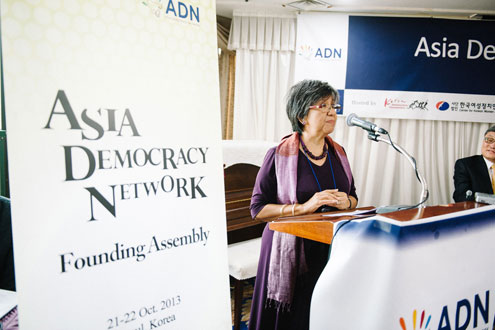 Melinda de Jesus, executive director of the Center for Media Freedom and Responsibility in the Philippines and a member of the ADN International Organizing Committee, presents during the Assembly. Photo/Dustin Cole

The Inaugural Assembly was attended by close to 80 prominent civil society members from over 20 countries, including Myanmar, Vietnam, Pakistan, and Nepal. Other leaders also spoke at the inaugural ceremony, including Min KoNaing, one of the main leaders of Myanmar’s democracy movement, the “88 Generation Students Group,” Maria Leissner, the first secretary general of the Community of Democracies, Carl Gershman, president of the National Endowment for Democracy, and Suren Badral, ambassador-at-large, Ministry of Foreign Affairs, Mongolia.

The conference plenary and panel discussions covered critical issues, including peace-building, defending civil society space, strengthening democratic governance, civic and democracy education and poverty, and the changing landscape of official development assistance (ODA). During these conversations, participants took a hard look at some of the challenges facing Asia today, including corruption and failure of accountability mechanisms and poverty and social inequality, while acknowledging gains made over the past few decades, including in South Korea, the Philippines, and Indonesia.

Despite many Asian countries having reaching what one speaker called “Democracy 1.0,” there was a general acknowledgement that many of the region’s countries had far to go before reaching “Democracy 2.0.” In fact, Democracy 2.0 remains elusive for many of the world’s consolidated democracies. Some of these challenges or threats to democracy include rising inequality even as overall growth rises, shrinking space for dialogue, impunity, corruption, and weak institutions.

Participants agreed that while these issues at times may seem insurmountable, ADN can serve as an important voice across Asia and globally, drawing not only Asian, but also global attention to internal country and regional threats to democracy and human rights. ADN’s strength is its clear terms of reference underpinning its Charter of Principles that sets priorities, both in terms of countries and issues, and sets forth specific terms for its own governing body.

The ADN, strengthened by the expertise and experience of its members who come from a range of disciplines, including academia, think tanks, media, political parties, and labor organizations, reflects a maturity among many of its members in terms of capacity and understanding of what it takes to move such a network forward.  Many of the network’s members have themselves built their own countries’ nascent civil society networks to become formidable and active networks,  working with networks in less open societies while protecting and sustaining the democratic gains they fought so hard for over the past few decades.