The November 2013 Constituent Assembly (CA) elections in Nepal revealed very strong anti-incumbency sentiments among the voting public. So too did the 2008 CA elections, when Nepali voters turned to the newly above-ground Maoists (CPN-M), rejecting the more “seasoned” parties such as the Nepali Congress (NC) and the Unified Marxist Leninist (UML), in order to try out a new political force with a compelling reformist image, albeit with no governance experience. Five years down the line, with the Maoists failing to deliver on almost anything they’d promised, including the much-awaited constitution, the electorate has returned overwhelmingly to the NC and the UML, relegating the Maoist to a distant third position with about 13 percent seats in the CA. 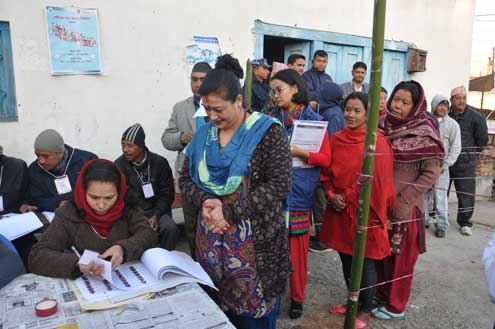 In most democracies, periodic elections often manage to punish the non-performers but there rarely are more than a couple of viable parties to choose from, and electoral politics is often unforgiving of fresh platforms and new faces. The result of course is that voters throw out one lot of ineffective politicians only to replace them with another lot who had earlier lost elections for the same reason. While anti-incumbency voting denies perpetuity of power to ineffective rulers, where party choices are very limited, it only manages to make incumbency rotational among more or less equally ineffective politicians.

The November elections in Nepal have, in that sense, reallocated political power among the three major parties without significantly changing the actors. As the troika now begins to confront the task of drafting a new constitution within a year as promised, other challenges that should also cause performance anxiety loom large. Ending an entrenched culture of impunity that has lingered for almost two decades, fighting corruption that has percolated and settled at the grassroots to choke financial accountability practices at village-level units of government, improving business climate, managing inclusive growth, and making social sector investments more effective are even greater challenges to durable peace and stability in Nepal. From their track record, however, the threat of losing an election four years down the line for failing to deliver on any of these will not be adequate in forcing a behavioral change in any of the political actors. Absent a change in behavior among those who are elected to govern, who will be accountable for progressing pressing developmental issues in Nepal? Is something missing in the popular understanding of accountability in politics and government?

A narrow understanding of politics and political practice has caused professionals and the rest of the Nepali middle class to disengage from individual and associational civic responsibility. (Read more on this in a recent In Asia post, “New Idea of Politics Needed For a Stable Nepal.”) A transformation is needed in the nature and scale of civic engagement in promoting political accountability. Part of Nepal’s problems with pervasive corruption originates from a lack of everyday civic engagement in matters of governance – what some call indirect democratic practice (as opposed to the direct democratic practice of voting every few years). For example, non-governmental organizations that conduct and promote public audits at the local level in Nepal find it difficult to mobilize public participation in accountability exercises. Even if some people participate, these rarely transform into accountability movements. Compare this to India, where the Right to Information (RTI) Act is actively used as an anti-corruption tool down to the grassroots. The use of RTI in Nepal, in contrast, remains confined to a few journalists and independent researchers in Kathmandu; and, in almost all instances of petty corruption, whether in obtaining legal documents, issuing national IDs, land transactions or in the tax office, Nepali service seekers would rather pay a small “facilitation” fee than invest themselves in a process that would seek to fix the system.

Whether this is because the Nepali experience of popular movements is relatively recent and sporadic, or because the level of impunity in state actors is such that the scope to demand basic accountability itself is rather narrow, broad civic interest and participation in accountability movements in Nepal is generally low. In neighboring India, Delhi’s new chief minister, Arvind Kejriwal, from the one-year-old Aam Aadmi Party (or the Common Man Party), is a civil servant-turned-RTI activist. Voters in Delhi seem to have found a ferocious voice in a citizen-campaigner who could represent their own frustrations with the government and have catapulted him to the seat of power. It remains to be seen whether putting an inexperienced, anti-corruption activist at the helm of government improves governance, but Kejriwal’s victory in Delhi has demonstrated that a certain level of public discontent can be transformed into fervent civic engagement in very short order if an accountability champion or two can be found to coalesce around. In Nepal, those champions shall have to surface from a renewed, continuous engagement of society with politics, because real democracy requires accountability from both citizens and from government—neither alone suffices.