On June 5, the United Nations Environment Programme (UNEP) will focus its World Environment Day campaign around “Raise Your Voice, Not the Sea Level” to draw attention to the issue of rising oceans worldwide. Sea level rise is an inevitable consequence of the overall increase in greenhouse gas (GHG) emissions and the subsequent heat trapped in the earth’s atmosphere. 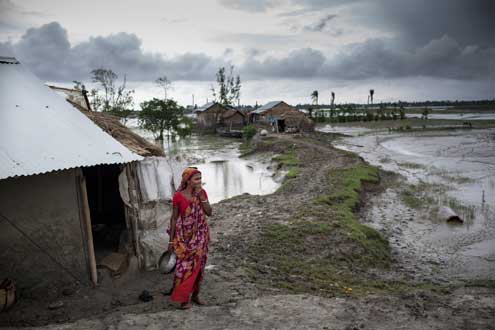 In South and Southeast Asia, 250 million poor rural people live in the low-lying river megadeltas such as this southern region in Bangladesh. Photo/Conor Ashleigh

The ocean remains the single largest absorber of all GHGs, as well as over 80 percent of the heat generated from global temperature increases, which is causing its volume to increase and relative height to coastal areas to rise through a process known as thermal expansion. The ocean’s atmospheric gas and heat transfers are expected to contribute to more than half of the predicted 1-3 meter sea level rise by 2100, the remaining of which will be due to additional water dumped into the oceans from rapidly melting mountain snow pack, glaciers, ice caps, ice shelves, and permafrost.

The questions now are not simply will the oceans rise, but by how much, where, and what will the effects be? The International Panel on Climate Change’s (IPCC) most conservative estimates indicate that sea level may rise on average at about 4 millimeters per year, reaching 0.22 to 0.44 meters above 1990 levels by the period 2090-2099. Nowhere is this threat as prominent as it is in Asia, especially for low-lying coastal areas in South and Southeast Asia and small island developing states in the Pacific, which are highly vulnerable to storm surges, coastal erosion, flooding, and inundation. Here are the top three ways that sea level rise will threaten this region, and the consequences if global action to reducing GHGs remains inadequate:

If we do nothing to mitigate our heat-trapping GHG emissions, the world and the region risk facing these worst-case scenarios. But if policymakers and communities ramp up efforts to adjust to these impacts, then we can reduce the overall costs to people, land, and economies. High impact adaptation measures will be needed to strengthen flood resilience, protect people and assets, and better plan future development in order to deter massive displacement, food insecurity, and damage to infrastructure in this part of the world. The cost of adaptation to sea level rise in the Asia-Pacific would be large, but the benefits to human security would far outweigh the expense.